DON'T MAKE US LIKE YOU. If Charlie Weis just turns the corner and becomes TROLLie Weis for the duration, we may be forced into an emotional state bordering on...oh god...."like."

This is in response to Will Muschamp's presser last night where he said that yes, some starters would likely be losing their spots over a lackluster scrimmage. Watch it and continued to be astonished at the near perfect amalgam of Sabanish inflection and Mack Brown timing that is the Muschampian idiom, and how this actually all didn't sound as terrifying in person as it looked on paper.

****ADDENDUM THIS IS JASON LIESER TROLLING US AND THE WORLD AAAAHHHHH JASON LIESER YOU GENIUS WELL PLAYED AND WATCH YOUR ASS---the editorial staff.****

BLATANT HOMERISM, CONT'D: Bill previews Florida, and it all sounds just like it did going into the 2010 season minus "Urban Meyer's flex-time work arrangement and Addazio proxy." [Just vomited typing that!] So nothing's changed, and we're looking at a complete crapshoot landing anywhere between five and ten wins. In the grand historical course of things, that should be another blip in a long upward trend, hopefully, but HOLY SHIT LOOK AT OLE MISS. 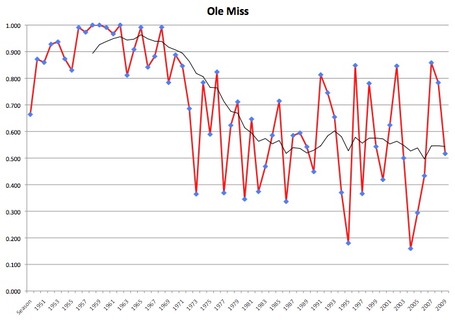 Your souls, Ole Miss fans, are places of extreme violence and sorrow mixed with moments of irrational and doomed joy. We never knew you had to be so strong just to face another day, and apologize for almost all of the horrible things we said about you.

"WE HAVE HIM PUNT WITH HIS ARM, CALLER." Les Miles handles live radio heckling better than any coach in America, perhaps because he is so calm and collected, and perhaps because he doesn't know what's going on and really was thinking about moving Jordan Jefferson to punter. (EVERY PUNT IS A FAKE PUNT.) Meanwhile, future punter Jefferson had the police search his house yesterday, presumably looking for a shoe to match a footprint left on someone in the Shady's parking lot brawl.

Bonus LSU crime notice! The police are formally investigating a case where a fight with football players Zach Mettenberger and Sam Montgomery found themselves on the wrong end of a gun earlier this year. Repeating that: the LSU players were on the wrong end of the gun, i.e. the barrel end. (Via.)

NEVIN SHAPIRO HAS ALWAYS BEEN A DICK. He started young. He finished strong. Remember: being a dick doesn't happen overnight. It is the culmination of years of work, and of countless unsuspecting and defenseless people being punched in the face. (And of course his flag football team was "Public Enemies." Of course it was.)

Oh, and 12 Miami players may be ineligible for the opener against Maryland. The Butch-er's Dozen, if we can give a name to the act of suspending a good chunk of your roster immediately before game one. #RIPButchDavis

THIS IS BEFORE THE SHOT GIRLS ARRIVED, WE'RE CERTAIN. Dana Holgorsen talks up the troops in Morgantown in what was the calm before the storm. Oliver Luck can't funnel an entire sixer of Natty Lite? Oh, you thought wrong, sir, just like you thought wrong that you would never need an Andrew Luck matryoshka doll.

COMPUTERS EVEN GET SMARTER WATCHING FOOTBALL.  They have a name for this program already, and it is called the pattern reading Cover 2 Nick Saban 3-4 defense. (Via.)

GOD DOES NOT ORGANIZE DEPTH CHARTS. Someone please remind Lache Seastrunk of this, and that every team ever has a white uniform variation.

THAT IS A QUALITY WHIP. Virginia Tech, stand up.

COWBOYS NEED LOVE, TOO. A series of Big 12 marital aids may not stave off a divorce of the conference's stormy plural marriage, but it is good for a few laughs along the way.

LES MILES SEES THE WORLD LIKE THIS. All the time, every day.

THE ONION DOES NOT WRITE FICTION. One day Brian Kelly will get them over that hump, but until he does Notre Dame will continue to lose to Notre Dame.

ETC: Purchased immediately and then repurchased just to make sure.