AN INCOMING CALL FROM WILL MUSCHAMPS

Share All sharing options for: AN INCOMING CALL FROM WILL MUSCHAMPS

Rainey on Muschamp’s attitude during practice: "We just saw him yelling at a trainer across the field and everybody looked at each other like, ‘Wow. He’s the real deal.’ He’s bipolar, too. Don’t tell him I said it. 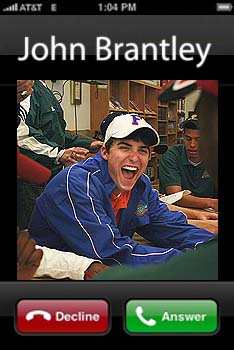 John Brantley: Hey, coach. Just wanted to check in and see how you doing. Shore is hot. 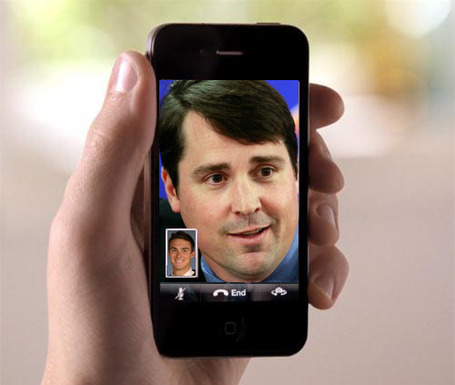 Chill Muschamp: Oh, John that's so nice of you. You betcha it's hot. Hotter than a junebug in a fat man's pants, if you asked me.

Chill Muschamp: Not gonna take the Weis joke there?

John Brantley: Nossir. I have too much respect for Coach Weis to do that.

Chill Muschamp: Attaboy. Say, how are you doing? Everything good? Getting enough Vitamin E? I noticed your lips looked cracked and dry the other day. Can't have enough fish oil in your diet.

John Brantley: Thanks for asking sir. They are a little cracked, but I'm taking a supplement.

John Brantley: I'll do my best, sir. Sir, i did have a question, though.

Chill Muschamp: Why, go right ahead, son. You're our QB. You can ask me anything.

John Brantley: Someone...someone left something in my house today.

Chill Muschamp: Is that so?

[Another call beeps in. He looks at his iPhone face] 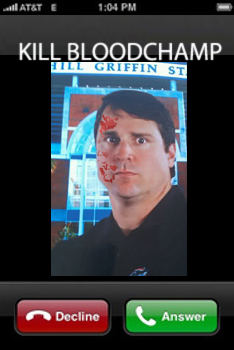 KILL BLOODCHAMP: THAT IS NOT A HORSE'S HEAD.

KILL BLOODCHAMP: THAT IS AN ALPACA. THE REST OF IT IS IN YOUR KITCHEN. SKIN IT. KNIT A SWEATER FROM ITS HAIR AND FEEL A WARMTH YOU WILL NOT EVER FORGET NOR WANT TO, JOHN BR-INT-LEY. EAT ITS MEAT AND GROW STRONG. YOU WILL NEED IT.

John Brantley: I'm sorry, I think you have the wrong number--

[He clicks back over.]

Chill Muschamp: So you were saying--

John Brantley: [shaken] Yeah, it was weird. It was just sitting in my bed.

Chill Muschamp: Well, I'd use some bleach on those sheets. Not patterned, I hope.

John Brantley: Tom Brady wasn't allergic to paisley until he got to New England, and now Coach Weis says his throat swells shut whenever he sees it.

Chill Muschamp: Man, we got a good one there, didn't we?

KILL BLOODCHAMP: DAMMIT BRANTLEY I TOLD YOU ONCE I TOLD YOU A THOUSAND TIMES GIVE A MAN AN ALPACA HE HAS A SWEATER AND MAYBE A PAIR OF MITTENS AND A TEA COZY ONCE BUT TEACH A MAN TO KILL ANY ANIMAL HE COMES ACROSS AND HE CAN TURN ANYTHING INTO SUIT OF THEIR SKIN AND NO LESS THAN THREE LUNCHES OF FRESHMEAT AND THEN THE PICKLING MEATS FOR WEEKS AFTERWARDS. WHY DON'T YOU LISTEN?

John Brantley: I'm sorry, I'm going to have to block your number.

KILL BLOODCHAMP: OH THIS IS IMPOSSIBLE JOHN BRANTLEY BUT THEN AGAIN YOU SHOULD BE USED TO BEING BLINDSIDED DUE TO A LACK OF BLOCKING. TELL ME JOHN: ARE YOU GOING TO THROW THE BALL AWAY THIS FALL?

John Brantley: When the moment calls for it. Who is this?

KILL BLOODCHAMP: THAT'S RIGHT YOU ARE GOING TO THROW THE BALL AWAY EVERY TIME YOU TOUCH THE BALL. I WANT THE FRONT ROW OF BEN HILL GRIFFIN STADIUM TO DEVELOP THE BEST HANDS IN THE NATION. I WANT YOU TO THROW THE BALL THERE SO OFTEN PEOPLE BRING BASEBALL GLOVES TO FOOTBALL GAMES.  UNDER NO CIRCUMSTANCES DO I WANT YOU TO EVEN ATTEMPT A PASS THAT DOES NOT FINISH IN THE HANDS OF SOME SKIN-CANCER ADDLED BOOSTER ON THE FIFTY. FOR YOUR PURPOSES AIM FOR THE FORTY ON EITHER SIDE. IT MIGHT LAND IN THE RIGHT PLACE. STRANGER THINGS HAVE HAPPENED.

KILL BLOODCHAMP: CALL ME BLOODCHAMP why don't you transfer I MEAN KILL. DID I SAY SOMETHING THERE?

KILL BLOODCHAMP: JUST LIKE YOU HUNG UP ON TEXAS JOHN BRANTLEY I CAN'T BELIEVE YOU WERE SCARED OF GARRETT GILBERT JESUS HE'S LIKE GINGER YOU. TALL HIGH SCHOOL QUARTERBACKS WITH CLOTHES IRONS FOR HANDS I BET THOSE GET A NICE CREASE ON A PAIR OF VICTORIA'S SECRET PINK PANTIES, DON'T THEY SON---

John Brantley: Coach, I'm sorry. Are you calling me from two different phones?

Chill Muschamp: Oh, why, how could a person do that, John? That sounds crazy, buddy. I barely understand this whole facetime thing, myself. You seem scared, John. I can't have that in my quarterback. You're our guy. I just want you to know that. You can't be scared.

Chill Muschamp: I know, son. Sometimes life is like that son. It throws obstacles in your way. Bumps in the road. Alpacas in the kitchen--

Chill Muschamp: --you know, adversity. We're gonna have to deal with that, John. We're all gonna have to learn to overcome that together. As a team. As a family.

Chill Muschamp. I have to go to a meeting now, John. You stay positive, okay buddy? We need you out there.

John Brantley: You got it, coach.

DEAR GOD IN HEAVEN I SWEAR IF I SEE YOU MAKE SWEET LOVE TO THE MIKE LINEBACKER'S WIDE OPEN EYES AND THROW THE BALL DIRECTLY TO HIM ONE MORE TIME I WILL SKIN YOU LIKE A RABBIT DO YOU HEAR ME? I WILL PULL YOU OFF OF YOUR SKIN LIKE A USED CONDOM.  IF YOU BACK MY BEAUTIFUL KILLING MACHINE OF A DEFENSE INTO A TWENTY YARD SEWAGE TRENCH BETWEEN THE ENDZONE AND THE TWENTY I WILL PUT A BUTT-OUT UP YOUR BUNGHOLE AND MAKE YOU RUN WINDSPRINTS WHILE I HOLD IT, DO YOU HEAR ME?? I WILL NOSTRIL RAPE YOU BACK INTO YOUR MOTHER'S WOMB. IT'S LIKE CABO IN THERE JOHN BOY. I WILL SKULL FUCK YOU SO BADLY JEFF DEMPS O'ER THERE'S GONNA CALL YOU SLEEPY HOLLOW---

[John Brantley picks up alpaca head and mopes out of bedroom]