HE HAS RISEN INDEED

Share All sharing options for: HE HAS RISEN INDEED

In a surprise to few following a team many around these parts could be in-store for a Notre Dame-clause worthy BCS berth (or beyond), Notre Dame's Brian Kelly soldiered through the tragic loss of his mentor and spiritual guru and announced Tuesday that Dayne Crist would reprise his role as Notre Dame's principle signal caller. The senior-to-be outclassed and outlasted his spot replacement of yesteryear, sophomore Tommy Rees, in earning the responsibilities of assuming ND's lead spot. Nowhere to be mentioned in the mix is Notre Dame's physical skill set answer to Zach Collaros (at least Kelly-mindmelded Collaros), Andrew Hendrix, who appears destined to settle for a show in the competition at best.

Year two in Brian Kelly's tenures have meant some Phil Steele (PS 2k11 10 yrs #1 mag)-esque most improved team credentials along with a strong shot at generally outperforming even the most more prudent projections afforded them. With a schedule not peaking until the season's second to final week in Palo Alto,*  the Irish appear primed to let their few remaining question marks (perhaps most notably right tackle Taylor Dever's week-to-week consistency) answer themselves before a date with Andrew Luck that could very conceivably amount to either a BCS appetizer or play-in game.

Of course Crist's long standing (or, you know, inability to do so) injury woes gives no small assurances. The turn or river could both potentially burn the Irish leaving the "Charlie Weis Recovery Act of 2010" potentially behind schedule. With an ill-afforded low tackle here or fierce service academy gang take down there, the Irish's perennial BCS expectations could evolve into a dramatic regression to the mean of the grieving process. Stay strong, Irish James Van Der Beek. This possibility hurts Irish eyes much more than it could possibly ever hurt you... Or not.

*USF FAN: "IT PEAKS IN WEEK ONE WE NEVER GET ANY RESPECT." 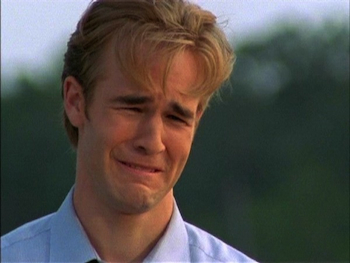