IF YOU'RE GOING TO BE DUMB BE EPIC THROTTLE-DOWN EATING PEAS WITH A BUTTER KNIFE DUMB RIGHT? This cycle has been disturbingly common and disturbingly accurate. Someone leaks a picture of an eye-scorching NFL Europe alternate jersey pulled off the Nike design scrapheap and turned into a "Pro Combat Uniform." (Cue Rip Taylor voice: "What are they fighting? Good taste? [throws confetti] [blowsparty horn] [flips toupee])

The picture surfaces somewhere. People point, aghast at the fashion genocide and brand rape their eyes see but their brains cannot process. They circulate on message boards, on blogs. They refuse to believe that the actual which is the horrible and the now very real has become the inevitable. And yes, a few listless weeks later, the horror becomes confirmed fact, and seriously you are not going to put Florida out in this, are you, Nike? YES YOU ARE OMG YOU ARE YOU BASTARDS. 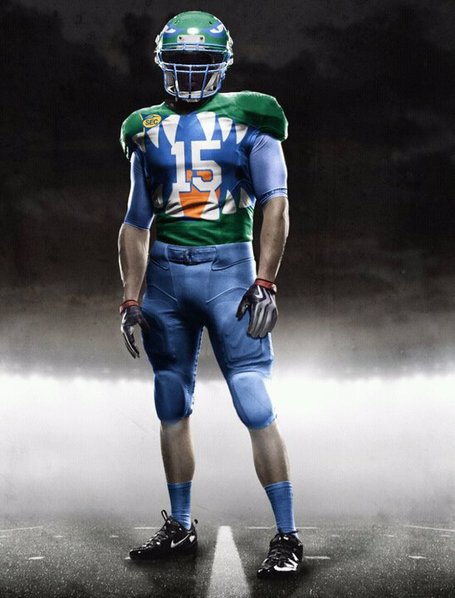 We may be lucky: this may just be internet fantasy, as keener eyes than ours (Luke's) have pointed out that they are photoshopped over last year's Pro Combat uniforms. So summary for the moment: likely shopped and fake, still potentially real because what won't you put past Nike at this point, and well you know the longer you look at it the helmet is kind of cool and the jersey is kind of boss and Stockholm Syndrome is real, y'all. It's so very, very real.

MARYLAND EMBRACES URINE AS A PRIMARY COLOR.  Fat men deserve better treatment at the hands of our fashion overlords, but everyone suffers when Maryland decides that a primary color in their uniform medley is going to be "Hangover Urine Maize." The turtle print on the helmet isn't bad, but lay a stripe of Maryland's checkerboard over it and suddenly we're all dropping acid inside a Saul Bass credits sequence. Uni Watch just out and out calls you corporate whores, Maryland, and that's appropriate because Randy Edsall is the bland office park of coaches.

JUST WATCH IT. When everyone else is setting footage of football stupidity to this, you can say you were hipster-there at the outset, and then award yourself points.

LSU ZOMBIE FIGHT CONTINUED. LSU players are expected to speak with police today regarding Jordan Jefferson and others' involvement in beating up a zombie. Aunt Stabby isn't worrying about this killing LSU's football season, because have you met LSU football, really?

OOOOOOOOOKLAHOMA. For the nth straight year, everyone's favorite preseason favorite looks like a more than logical choice for a preseason poll, and this can be cut and pasted for as long as Bob Stoops is in Norman. (Though a slow start, especially against Florida State in Tally, is not recommended lest everyone start handing out the Stoops Trophy for Preseason Poll Dominance early.)

THE BODY COUNT PEOPLE ARE ON THE CASE. The Rand Corporation is on the case of the NCAA. Expect lengthy bills and a short report reading "We have no idea what these people do." In more fun NCAA news, they dislike the proposition of youth sports broadcasts, and can't do anything to stop it. Neat!

I'M SORRY WHAT ATHLETIC DEPARTMENT DO YOU REPRESENT OH THAT'S RIGHT. Vandy's David Williams thinks the SEC is just fine as it is, and when you're Vandy everything truly is a country club.

EVERYONE INCLUDING THE GOVERNOR HATES THE CY-HAWK TROPHY. The head of your state finds it to be a disappointment, everyone hates it, and Ivan Maisel certainly recognizes how bad---

I read several days worth of tweets and headlines regarding the uproar in the state of Iowa over the new Cy-Hawk Trophy, awarded to the winner of the annual Iowa-Iowa State football game. I expected to see some grotesque combination of weather and predator. I finally clicked on a link for the the trophy. It’s a sculpture of a farm family at day’s end. It’s as sweet as an ear of Silver Queen. Iowans should be proud to win it.

---and your Christmas gift of a motivational poster and a Things Remembered pen caddy from Uncle Ivan reading "WRITE YOUR DREAMS EVERY DAY" suddenly looks a lot less ironic, doesn't it?

RUSSELL WILSON IS SANJAY GUPTA. He is. Look at his handsomeness.

RICK NEUHEISEL  At least he's not showing the signs of stress over his impending firing.

ETC: China, you're really serious about national greatness. Jon Bois is right: this song is the jam. Sandra Lee swearing is far less entertaining than we thought it was going to be.