YEAH FEEL THE EXCITEMENT OF TODD GRAHAM. Todd Graham is on the mike at Big East Media days, and he's excited, a word he's used about five hundred times in the last ten minutes. He is also amazing at texting while talking. Just look at him negotiate a deal with UNC under the podium without looking! 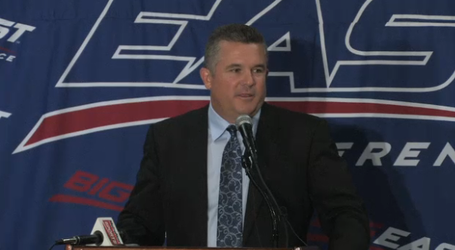 He's not even looking down, a true sign of a professional job vulture. It may be 30 days to college football, but the end of the desert run still means you're in the desert, which is why we just watched Paul Pasqualoni talk with words coming out of his mouth for 15 minutes. Before you say there's nothing to Big East Media Days, please: if Syracuse is there, they will make legends from lobster eating and kill it in the mustache game just to make something happen for your entertainment.

The Big East ran out of lobster at their dinner last night, giving us a new metaphor for what happens to them every year when it comes time to allot prime bowl slots.

YEAH LET'S HOLD OFF UNTIL WE CAN START DOING THIS WHILE NO ONE NOTICES.  The Big 12 has backed off the Longhorn Network's plan to air high school games for at least one year while Texas A&M and Oklahoma finalize their deal to move to the SEC, or get an apartment together and just date around like two swingin' bachelors, man. If you're wondering who the slob in the apartment would be, we think you know the answer already.

YOU ARE THE MONSTER SIR. Tattooed on Alabama lineman Jesse Williams' arm: "I stopped checking for the monster under the bed when I realised the monster is me." He's going to tackle people by throwing saltwater crocodiles at them because paving people on bull-rushes is going to get old after a while. We accept this, and welcome our new Aussie overlord with open arms and a generous offer of wallaby meat and 500 gallons of beer. (AKA, "Aussie Tuesday.")

WE MOURN YOU, AMISH BRO-BEARD. We knew you were just experimenting, you preppie tease.

YOU'LL REGRET WHEN HE'S A CFL QUARTERBACK.  Jonathan Crompton has been cut by the Patriots. Bill Belichick says it just didn't work out given the Patriots' depth chart and the strong performance of Giant Catfish both in the film room and on the practice field.

RANDY MOSS WAS NOT HUMAN. And still isn't, but like Dr. Manhattan he's just bored with you mortals, and has been for years.  We ate at Tudor's Biscuit World this weekend in WV, and came to the consensus decision with our compatriots that the signature line of biscuit sandwiches there needed to include the Randy, a biscuit that would be the Straight Cash Homey of biscuits by having nothing but like 18 layers of bacon, like enough to make it difficult to eat if you were old or had bad teeth.

ETC: Andy Staples has a barbecue blog now. He says kind things about Alan Richman; other than that, the premise sounds perfect. If you would like to run this race on October 1st with us, let us know, since it's over before Gameday starts and could involve powerful vomiting.