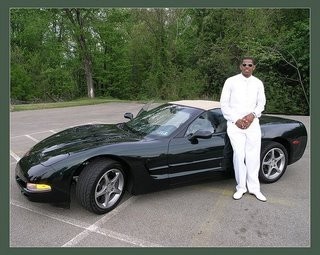 Terrelle Pryor with his prom date. The love they made was furious, unconventional.

WE THE POLICE DEPARTMENT OF CHARLOTTE, NORTH CAROLINA, ARREST YOU FOR AN ADULTERY CONVICTION FROM DUBAI.  Terrelle Pryor will be allowed to continue his pursuit of an NFL roster spot, per Adam Schefter, who undoubtedly broke the story eavesdropping from his spacious but well-concealed potted plant in Roger Goodell's offices. (Chris Mortensen is crashing on the couch for a few weeks. It's a very personal situation, and he's helping a bro out. But if he doesn't stop taking just one spoonful of ice cream at a time using one clean spoon every time, he's going to kill him in his sleep, and that IS an exclusive, Mort. Mark it fucking down.)

Pryor will be allowed to join the supplemental draft, but will serve a five game suspension because the NFL is now an arm of the NCAA or something like that. By implication, if you are a college football player and wish to negligently kill someone with an automobile, go right ahead. It will only cost you somewhere between 5 games and 16 games. (Don't ever assume the adults are in charge. Manbabies clad in suits and logical inconsistencies everywhere.) If cross-organizational extradition and punishment for crimes are now in play, the NFL needs to read up on spreads and remind players that The Clear is NOT an acceptable or endorsed spread on bagels.

NO THERE WON'T BE A DEATH PENALTY DISCUSSION. Sources at the NCAA---wait, that doesn't look suspicious enough. [Consults blogger guide to style.] Okay: "sources" at the NCAA have told Pete Thamel that the death penalty hasn't even been discussed in the Miami case. This may not be of any real surprise: the NCAA moves with the speed of a glacier sprinting uphill, and certainly doesn't like to comment on specific penalties.

No, they like the unadulterated fun of just dropping the courthouse on those least expecting it, or letting the victim feel the coarse Manila rope fibers of the hangman's noose itself against their skin before smiling, patting them on the back, and writing a parking citation before sending them on their way. The mercury-poisoned syphilitic judge of the sport that is our Old West, if you will.

Bill C., in the midst of his USC preview, sums up what should be the penalty for the Miami case if any of this made any sense.

I always find it morbidly funny when somebody gets consecutive life sentences and ends up being "sentenced' to something like 394 years in prison. Just call it a life sentence and be done with it. Well, if USC's punishment is a precedent (granted, we know from past experience that the NCAA is not nearly as based around precedent as fans would probably like), then Miami can expect something in the neighborhood of a 72-year postseason ban, the loss of 10,800 scholarships, vacation of every win from this one to this one, the disassociation of every Miami football player of the 2000s from Miami athletics, forfeiture of every basketball win of the past three seasons, 144 years of probation, and the return of the coveted 2006 MPC Computers Bowl trophy. Or, to put it another way, a life sentence. I don't know if Miami is in line to receive the death penalty or not -- honestly, it might be cleaner that way -- but I am betting that USC fans are awfully interested in the degree of the punishment.

I BET THEY ARE. (Hey, look, a profile on Bill and his sexy Mizzou shorts.)

The rest is just reaction without any real new disclosures. The best thing you'll read about it comes from the Seventh Floor, who is entirely too self-aware about all this without a single homosexual slur to be found.  Bryce Brown is likely fine, and so are Debose and Patchan at Florida. Donna Shalala has no tolerance for breaking rules, but she doesn't mind when they're burned right under her nose. The aroma! It's so fragrant. Essential fashion for the scandal, provided. Wetzel bein' Wetzel, y'all;  Hayes saying Al Golden is gonexxzzzooorz. (No one would blame him.)

AND ORLANDO IS DOING THIS JUST FOR ATTENTION.  UCF, the NCAA. The NCAA, UCF.

ACTUAL FOOTBALLISH NEWS. BC's starting running back Montel Harris is out for three to four weeks with a left knee injury, prompting Frank Spaziani to say one of these things pressed at random. Harris had a chance to become the ACC's leading rusher ever this season, and that is a piece of trivia that will get you nothing ever anywhere.

AWWWW LOOK THEY'RE ALL CUDDLY.  There's no rift on this year's Gators team, and that's good because they're a team and stuff. In more tactical, useful news, Sharrif Floyd has been moved to defensive end, and that is a horrifying prospect for opponents given Floyd's ability to tackle Yaris-sized cars for fun. Jaye Howard says John Brantley is going to be a Heisman candidate, and that Brantley's a real catch, girls. He's polite, shows up for dates, is well-groomed. If you have any friends you think would be interested in a date with John, he's not busy, and would love to meet a special lady to hang out with sometime. He's just...shy, that's all.

READ THIS IF YOU ARE A NEW OR ASPIRING COMMENTER. It's useful, and more than accurate, and like everything else on EDSBS feel free to break any of the rules at any time as long as you acknowledge that they're there in the first place. The T-Rex is always around the corner.

HOT COUGAR ACTION. Never has a headline been so misleading.