James Franklin may truly be the man for the job at Vandy.  He's young. He's dynamic.  He pitches the job like it's Stanford East, and not Walt Harris Stanford, either, but cruel Jim Harbaugh killer Stanford. He makes jokes about Vandy gang signs with tone and execution so appropriate and on-pitch even the churchmarms in charge of Nashville life seem happy to laugh along with him. Unlike Bobby Johnson, his pulse rises above 50 beats a minute, and unlike his predecessor he is not distracted by banjo tours or writing his third novel about--shocker!--a much older man who somehow sleeps with an attractive woman much younger than him.

He even understands that preparations for being Vandy in SEC football entail pain: unrelenting, random, and often unbearable amounts of pain. Gentlemen, you won't survive this. That is beyond your powers. But James Franklin assures you that like the Dirty Dozen, you'll take a chunk out of the bear's ass before he eats you, Vanderbilt. He'll be the first to show you just what that entails.

After Franklin was intercepted by LB Archibald Barnes on a pass over the middle, the coach gave chase toward the front left pylon as Barnes attempted to return the pick for a score. Sophomore DB Andre Hal was shielding Barnes when Franklin - not wearing any pads, mind you - put two arms into Hal and sent him flying out of bounds. It was a priceless moment.

Andre Hal then flew through a fence, into traffic, and bounced off three cars before flying headlong into a sewer. Franklin then turned, looked at his stunned team, and yelled "IT'S GONNA BE LIKE THAT EVERY WEEK, BUT WORSE! EXCEPT FOR OLE MISS, WHO WE'LL BEAT FOR SOME REASON! DON'T AVERT YOUR EYES! DRINK IN THE HORROR AND MAKE IT YOUR FRIEND!"

Franklin didn't actually say this. But if he did, he'd only do it because he loved you, Vanderbilt football, and wanted to prepare you for things. He would do a lot of things for people he loved: tackling them on the field unexpectedly, or even dressing up as Buzz Lightyear with his son and wearing Tiger makeup while displaying a healthy set of ex-football player traps. PIctures of just that may be after the jump.

1. "Awww, James Franklin is like the greatest dad ever." 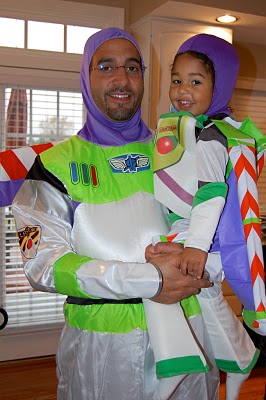 2. "Awww, James Franklin is like the best sport ever but GOOD CHRIST WHAT THE FUUUUUU---" 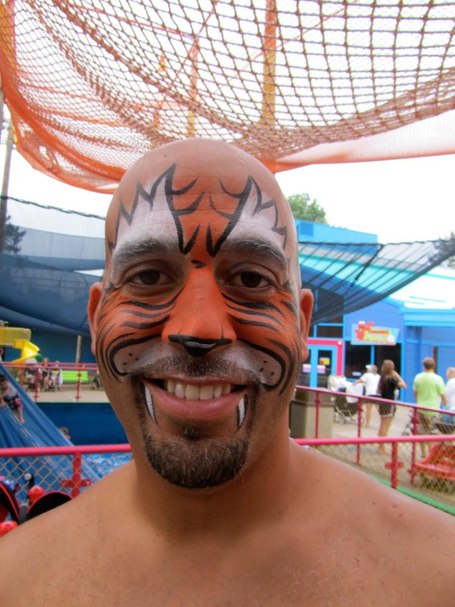 We will call him Coachy the Sexy Nightmare Cat, and we shall never sleep soundly ever again. Wear that on the sidelines, and ten wins are yours through fear alone.