I snap my fingers, and POOF! THERE GOES THE BIG 12! AH HA HA HA! BOWTIE POWER! 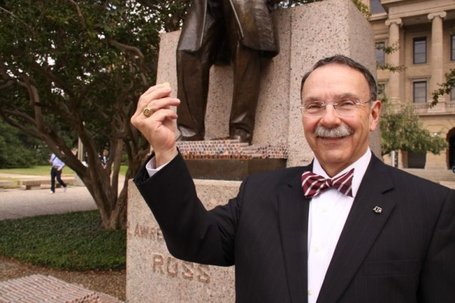 Texas A&M announces one quirky lass available for courtin'. Size: bigger than she looks, but not bigger lookin', I reckon. Breedin' prospects: solid, especially if we're talkin' bout the birthin' hips on Mike Sherman. Temperament: an honest gentleman would call her the kind of woman you serve at the table first, lest she feels she's not gettin' her fair share of the brisket. Affectionate. Prone to a fixation with men in uniform who are crazy about their bitches.

Kind of culty, but y'all are into that. Not to be overly personal with ya, but she's a yeller, when you get down to personal business, if that's a matter of importance here. Politically best described as conservative enough to make Alabama fans seem right liberal, if not gay and communist in comparison. I'm not sayin' you are, Alabama fans, I'm just saying that if meaning is defined by context then you better put on some hot pants and a Hugo Chavez half-shirt, that's all.

Available immediately for suitors of a certain financial means and temperament for 100 year relationship.