MIAMI (ALLEGEDLY) WAS ON A BOAT

Share All sharing options for: MIAMI (ALLEGEDLY) WAS ON A BOAT 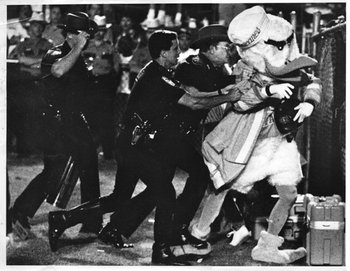 The NCAA is indeed looking into potential prohibited benefits given from Nevin Shapiro, Ponzi schemer and rabid Miami Hurricanes fan, to Miami football players during a period spanning the Larry Coker and Randy Shannon eras in Coral Gables. Shapiro's attorney says the allegations are part of a planned book on the U called "The Real U: 2001 to 2010. Inside the Eye of the Hurricane," and that her client has ample evidence to back up his claims of giving suits, jewelry, and tailored suits to Hurricane players during their time in South Florida.

Where does the heart of a Miami Ponzi schemer live? Oh, probably somewhere in this quote from Shapiro's attorney.

Perez said she hasn’t tabulated the monetary value of gifts and benefits that Shapiro said he gave players, but "it’s well over thousands of dollars. It took $2,000 just to fuel up the gas tank of the yacht at Riviera Club."

Did you hear that, America? HIS YACHT DRINKS THE BIWEEKLY PAYCHECK OF A WELL-COMPENSATED AMERICAN WORKER LIKE YOU CHUG DOWN A LUKEWARM SIERRA MIST. Even from behind bars, your luxury is proclaimed in filthy detail. So ballin', brah!

/watches Entourage on DVD in prison

The Miami New Times article on Shapiro lays out a pretty disturbing picture of someone whose wake may well include the Miami football program, and don't doubt that it could if anything he's saying is true. (And don't be sure they will or won't. As Hinton points out, it's not like there's any real consistent rationale for what the NCAA believes and doesn't believe, anyway.) It also makes Mr. Shapiro sound like every Miami Hurricanes fan we have ever known ever:

In 1992, a Miami Herald reporter interviewed the then-23-year-old Shapiro in the Orange Bowl stands during a Hurricanes game. As the Canes fell behind , the writer described Shapiro as looking like "a caged animal about to be cornered... [or] a man in dire need of sleep. He looked crazed...Years later, a judge asked one of Shapiro's friends whether the Beach High grad ever becomes violently angry. The reply: "Only when the Hurricanes are losing."

He's also got the second Miami Hurricanes' fan prerequisite: "Has sucker-punched a bouncer, and then tried to get his friends to lie about it in court."

The article also ends with a quick quote from Ronnie Shapiro, Nevin's mother. She has opinions about football!

Ronnie goes on, her husky, Brooklyn-accented voice rising with emotion. "They don't mean nothing to me down there," she says. "It's a good thing 99 percent of those people know how to throw a ball. You know where they'd be otherwise: Opa-locka, Liberty City, selling crack on the corners. I don't want to sound like a racist, but you know where I'm going with this. Once you're from there, you're always from there."

I don't mean to sound racist, but yeah you go right ahead and sound racist because when you hear "I don't mean to sound [SOMETHING BAD,]" just embrace it. As for whether this is Charles Robinson's ten out of ten, well, it certainly sounds like it, and if documented to have happened sometime within the past four years would foretell heinous things ahead for Miami. That's if you choose to believe the word of a convicted felon from South Florida, or as they are called in Dade County, "The mayor, police chief, or any random business leader."