DIGNITY REALLY ISN'T A CONCERN OF COLLEGE FOOTBALL PROGRAMS WHEN MONEY'S ON THE LINE. This conference shuffling and expansion talk is so stressful. Let's just kick this bitch Broadway-style for a minute and let our hair down, guys!

Whew. We needed that. Nothing a good homoerotic dance number can't solve!

Pressure vented, let's just consider a few things about conference expansion. First, dignity plays no part in this when there's this much money on the line, so that particular imaginary puppet drama gets tossed from the start. Dignity is a pair of clean underwear, a nice shave, and a well-handled, imperceptible three-drink buzz. What Texas A&M is worrying about is money, and if they stay or go, they're getting more of it either way. The SEC gets a foothold into mighty Texas, and with that expands the franchise slowly and carefully against the empires to the west and north. There's reasons all around, and none of them have anything to do with ascoted dignity. (This is still likely the case even with the NCAA clarifying that current bylaws do not support high school games as a part of tv deals, since that's a brick in the gaudy, zoning-be-damned mansion Texas built that has the Aggies so infuriated in the first place.)

Second, if TAMU comes to the SEC at any point, the next step will be a polite and lawyerly rejiggering of the SEC's finances to reflect increased membership and avoid any diminishing revenues. ESPN and CBS's deals with the SEC would have to be massaged to account for Texas A&M's added value, and with such long-term partnerships in play this seems to be the kind of good ol' boy boardroom chess Mike Slive is a blind Shaolin master at working.

Third, the 13 team setup being untidy for division's sakes, the prospects of another team now have everyone fantasy drafting teams away from the Big 12's rubble and the ACC. We have no idea who the best prospects for this team would be, but the most likely answers barring Oklahoma changing the balance of the SEC's very geography would be some team from the ACC with compatible geography and decent market footprint. These suspects: Florida State, Virginia Tech, Clemson, and on the way outside UNC. These are strictly theoretical, with the one breaking the most new ground in terms of untapped fans and markets being the Hokies.

Fourth, Rick Perry is speaking in Birmingham tonight at the Alabama legislature. Just across from the SEC Headquarters.Come on over for drink, Rick. Just a drink. Nothing else, Mike Slive swears. He's not trying to pressure you. We can hook up, hang out, just chill.

IN ACTUAL TERRIBLE ON FIELD NEWS. Knile Davis, the Arkansas running back who rushed for 1200 yards last year and is a big part of the preseason confidence party surrounding the Razorbacks, broke his ankle in horrific fashion yesterday in a Razorbacks' scrimmage. This description is not the kind you want to read regarding your starting running back:

The mood following Thursday's scrimmage was a somber one, with one witness describing Davis' scream as "so loud it will haunt us in our dreams."

This is all very bad for Davis, but the Razorbacks may be the team in the SEC most equipped to handle a loss at running back thanks to the presence of seasoned backups Ronnie Wingo and Dennis Johnson. Johnson in particular may be overly slept on; before losing last year to injury, he was a thumping terror against Florida in '09 and with improved consistency could be the best power back in the SEC. (Bonus: he can't possibly suffer an injury as freakish as "a perforated colon" twice.)

APR BLAH BLAH STANDARDS BLAH. The issue of the APR is so needlessly complex we haven't even had time to really parse it out, and really don't want to because seriously we're so close to real football and away from offseason bullshit, but upping it to 930 for eligibility even in bowl games just seems like another fence at the country club designed to keep out programs who can't afford Babylonian-sized academic support centers and programs. Mandel seems to think it's a good thing.

MORE IN A MOMENT. He is retiring, and we are legitimately sad about this, but the Ambassador Schnelly does have a magnificent ring to it as a kind of proxy Schnelly presence in our football lives.

OL' POP MUSCHAMP READY TO CATCH A FLAMING HAYBALE. Ol' Pops Muschamp as a TE at UNC, ready to catch the flaming haybales commonplace in 1960s passing drills. (Via.)

IF THIS WAS DONE WITH A MEDIA CREDENTIAL WE WILL SHIT KITTENS. Trey Burton's entire interview here is just him looking at this woman's boobs, and we can't even be mad at him about it because, well, boobs. A Brooksian illustration of this follows after the jump. 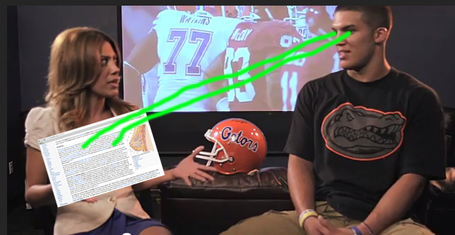 She also calls him "really hot" in the interview. Oh, so when she does it it's "playful banter," and when we say it to Dana Holgorsen it gets us banned from the West Virginia campus. Fine. Double standards don't exist. I GET IT NOW.