BRYN RENNER IS THE REAL NAME OF UNC'S QUARTERBACK

Share All sharing options for: BRYN RENNER IS THE REAL NAME OF UNC'S QUARTERBACK

Say all this, and also admit the absurdity of your own name. For instance, our first name means "servant," so in effect we were born with a butler's nametag on at all times. That would be exceedingly misleading unless you're looking for one of those tipsy, negligent butlers who takes their employers' DUIs for them in exchange for open access to the brandy cabinet and a blind eye turned towards afternoon rendezvous with needy middle-aged maids in the pantry. If that's the kind of servant you want, then servant it will be, sir.

With that out of the way, UNC's starting quarterback this year is named "Bryn Renner," simultaneously the most UNC name ever, and also an unfair justification for the UNC coaching staff to fire giant inflatable balls at him. Bryn Renner is terrified of giant inflatable balls, and the staff knows this, and college sports is hell, guys. Just total hell. 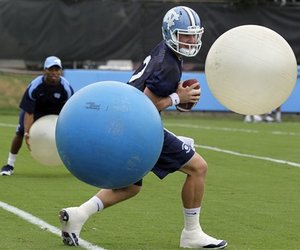 Bryn Renner doesn't sound like a quarterback at any level but the Ivy League. Instead, he sounds like any or all of the following things that do not involve throwing 2 yard passes in the Run 'n Shoop offense: