FULMER CUPDATE: LOOK AT YOU, SYRACUSE

Share All sharing options for: FULMER CUPDATE: LOOK AT YOU, SYRACUSE

Boardmaster Brian has taken time out of his busy schedule as a terrifying underwear model for Reggie Nelson's Magnum Drawers (For Men Who Pack Heat Discreet-like) to give us the Big Board for this week. Look at you, Syracuse! You're real boys without strings! 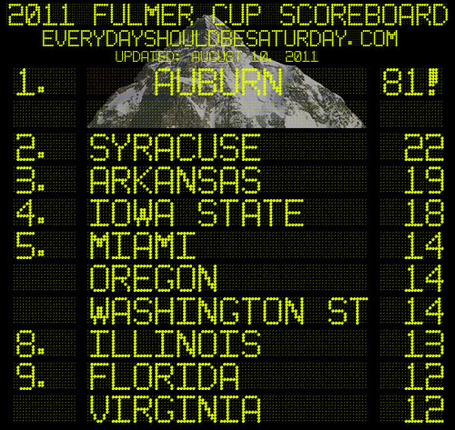 ILLINOIS: Ashante Williams, linebacker and physical impossibility, faces two counts of drunk driving. How one does this in a single arrest is beyond our feeble understanding, but his coach [NAME REDACTED] once said you could sleep ten hours in five "if you slept hard," so the laws of our physical world continue to not apply to Illinois. The Illini get four points in the Fulmer Cup as Williams is charged with being in two places at the same time, and Neil deGrasse Tyson is already busy describing how this could happen in space/time in terms your toddler understands. #luvuNeil

SYRACUSE (AND NOT COLORADO.) First, who does not get the points: Colorado garners none for the assault and robbery of a man in Boulder this past Wednesday because Bryce Givens, former Buffalo lineman, was not on the team and will not be on the team according to CU coach Jon Embree. For the moment, the Buffs' comeback to the major ranks of Fulmer Cup competition will have to wait.

One team who does not have to wait in a late charge up the rankings: Syracuse, who continue their return to college football greatness with the arrest of QB Jonathan Miller with Bryce "No Points" Givens in Boulder. The two allegedly assaulted and robbed a man of his cellphone and some cash last week, with Miller allegedly throwing the punch to the face that knocked the man down.

Sadly, his escapability rating according to scouts, NCAA 2012 and the Boulder PD was too low to avoid detection and apprehension by the defense. For the third-degree assault and robbery charges Miller earns three points a piece for each felony, and one count of possessing a fake ID is a point, and we have irony upon irony as the QB puts up seven points for Syracuse. So harsh of you to do that in a Violence-free Place like Boulder, man. So very East Coast harsh of you.

2:36 a.m. Drunk girl crying about some guy and how she lost her cellphone in a toilet. Again.

3:16 a.m. Some guy drove by playing Drake with his windows down. Really. Drake. That's how gangsta you are.

3:48 a.m. Report of loud music by old guy who lives next to bakery. Informed him smells were not sounds, and that he was just confused. He agreed. He always does.

TEXAS. Texas' Christian Scott was arrested for misdemeanor assault at 10 in the morning, so you probably don't want to mess with him before noon for any reason save football or, you know, if you need to arrest him for assault. One point for the Longhorns.