Oh, we'd love to simply rank the SEC's quarterbacks, but you see Swindle Manor has lost our faithful manservant Tra-Ping-Do in a tragic can opener accident. We use pistols to open cans at Swindle Manor. It's efficient and zesty, but from time to time it does have its drawbacks. So to kill two birds with one stone, we shall scout them as potential wacky manservants, since we are in need of both a wacky manservant for the unique duties required of our staff and--EYES JOHN BRANTLEY--possibly a replacement quarterback. (Have you seen Arthur or Batman, the Dark Knight Returns? Exactly like that, but with more guns and liquor.)

STEPHEN GARCIA, SOUTH CAROLINA. We suspect this would look like Arthur, but with two Arthurs and no wise butler. The liquor cabinet is empty, the curtains are on fire, and yet we're all having a great time now, and more curtains can be purchased later, yes? The true decadent aristocrat's choice for a servant who, while listening to nothing you say, certainly makes a fine companion to the lonely baronial type. 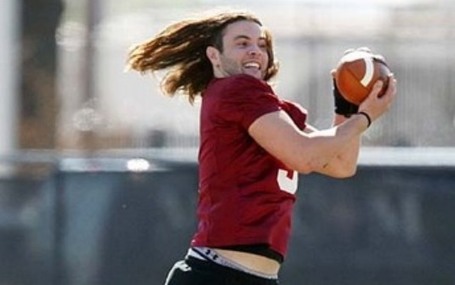 JORDAN JEFFERSON, LSU. "Jefferson! Hot towels! Now! Our pores stink of Four Loko and caviar. Be quick with them!"

/throws steaming hot towel at you

/puts him on Heisman watchlist 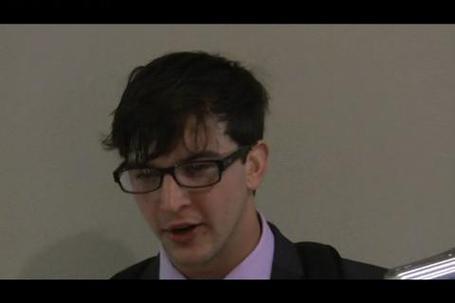 "What? Don't sit there like Freddie Kitchens' willpower. Bubbly on the doubly, emo boy!"

"I cannot accept this as a concept."

"I mean, you want to do it, you know go ahead. I'm not judging. I'm really not. But all my friends are really into this obscure stuff you've never heard of."

"It's kind of paleo, like the garage band caveman of champagnes. Here, try it. Or don't."

"Jesus, that's intoxicating! What is this nectar of the gods?"

AARON MURRAY, GEORGIA.  Would probably be the best of these: attentive, talented, suave, excellent footwork in high-traffic social situations. Unfortunately, would be blindsided by a train halfway through a cocktail party, a major embarrassment because you'd have lost a fine manservant, and because seriously, how the hell did someone build a high speed rail line through the mansion without us noticing? [Eyes empty highball glass. Hears ragtime music.]

TYLER WILSON, ARKANSAS. His resume's certainly nice enough, and the references are outstanding. However, we'll have to see how the boy manages balancing a drink tray while dragging a dead courtesan off the lawn with our own eyes before pronouncing him the next Jeeves. (And at Swindle Manor, the hooker drag/martini tray balance drill is mandatory. 200 yards, no sandbag substitutes, and a martini with garnishes delivered intact and 'jostled to only a minor degree.'"

TYLER BRAY, TENNESSEE.  Which one of you accidentally drove the Rolls-Royce into the pool--nevermind. First clean it up, and then we will discuss the terms of your firing and subsequent banning from the estate, Mr. Bray.

CHRIS RELF, MISSISSIPPI STATE.  With his, um..."unsubtle" running style, you may as well put a tuxedo on a hippopotamus, let him loose and call him "Christopher." We have in fact just done this, and he is ADORABLE. He is also decimating the Louis XVI chairs in the under-salon adjacent to the second library in the east wing. Let's just shut the door and wait until the smell of dead hippo or the screams of the gardeners tell us that the problem has solved itself.

MORGAN NEWTON, KENTUCKY. Well, he certainly looks like he has potential because he is the only one in the group with not one, but TWO butler-worthy names. Be as indifferent to him as you like; as a Kentucky player, he thrives on being ignored and unrecognized by those around him.

BARRY BRUNETTI, OLE MISS. If you like your manservants to be as unrecognizable and anonymous as hotel wallpaper, this would be your best option, because "Barry Brunetti."

JOHN BRANTLEY, FLORIDA. Earnest, but his slowness will prevent you from every getting anything ever than a "lukewarm toddy."* Additionally, has accuracy issues, which is why he gave a dry martini to your two year old nephew and a glass of warm milk to your drunk of a great uncle at your All-White Party. Neither nephew nor great uncle complained, however, and that may require some serious counseling for all concerned.

*This is also the name of Brantley's throwing motion.

BARRETT TROTTER, AUBURN. Don't scoff at the value, you skeptic. Herr Malzahn's Academy For The Wily Manservant teaches fine fundamentals, so much so that he'll do the basics well enough. He will also set the house on fire when you ask him to make anything more complex than Eggs Sardou. Take care and prepare yourself by purchasing several breathable but safe asbestos tuxedos.

VANDERBILT: ALL THE QUARTERBACKS. With eight on the roster, it's the value pick though there's no guarantee any of them can actually work. You may just end up with a kind of inattentive set of gardeners, and considering how intimate Vandy quarterbacks are with seeing grass up close and personal, this may be the best call in the end.