Brian the Boardmaster filed this from space, where he and his member are being used as an interstellar space elevator. He and Reggie Nelson take shifts for you, for freedom, and for our future as a species. 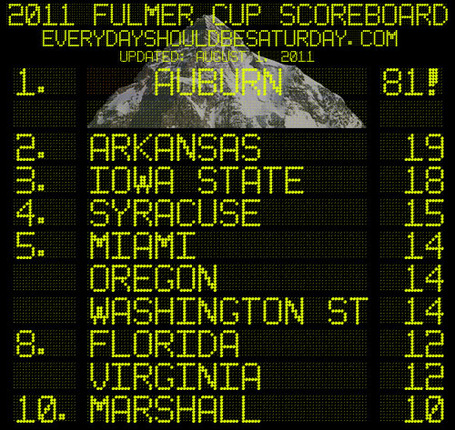 SYRACUSE. We had a discussion with a woman who went to Syracuse once about some recently released academic rankings. These are fun, because no matter where you are on the list the invocation of said list will invoke some form of deep insecurity. In this case, we said, "Yeah, Syracuse was ranked somewhere in the mid fifties alongside the University of Florida." Her response: "Wow, we've slipped." To conclude, the school you went to sucks, and you should always remember this.

There is something to be said about Syracuse grads, and that is most of them we've known have been very hard workers who coincidentally move the hell away from Syracuse at the first drop of "opportunity anywhere but Syracuse." Maybe the thought of lake-effect snows and moldering industrial plants is enough motivation all by itself, but there has to be a branded fondness for work and ingenuity at play here, too.

Just look at the diligence of senior starting wide receiver Marcus Sales, for instance. He wasn't going to be caught with the usual half-gram of loose shake weed rolling around his glove compartment. No: this is no slovenly Greg Robinson operation here. If things were going to go sideways, they were going to do so with Doug Marrone-like attention to detail, and a real care for the little things.

Police found three knotted pieces of plastic containing a green plant-like substance that tested positive for marijuana, a plastic baggie containing 180 Lortab (hydrocodone and acetaminophen) tablets, three digital scales, a plastic cup with gin and other baggies with devil, superman and pit bull insignias on them.

Does the Lortab jump out to you as the sketchiest part of this whole package to you? Weed is so collegiate, but we see pill and think "Appalachian pharmaceutical-steeze," a term which for the uninitiated is NOT good. Kudos on the digital scales, though.  A wideout lives and dies by his precision, and in this case Sales appears to take his cuts very seriously on and off the field.

There's four points in misdemeanors alone, and then three different felony charges, and if you get caught with three different digital scales and are drinking in the car, we give you the bonus point for "The Most Blatant Attempt To Live Out A Clipse Song" Award for 2011. That is 14 points for Syracuse in the Fulmer Cup, and a definite edge to Mr. Sales for the individual achievement award, the Ellis T. Jones III Award.

(Oh, and Syracuse running back Prince-Tyson Gulley was stabbed in a brawl this weekend, but he's fine because of medical science and because his last name is already "Gulley," son. YOU GOT TO BRING A BROADSWORD TO TAKE THIS DOWN GAME OF THRONES SHIT UP IN THIS.)