OHHHHH OOHHH OH OH OHHHHHHHH. Damn your facts and skepticism. There is a body in that casket, and it is real, and we saw it on the internet and the internet never lies. 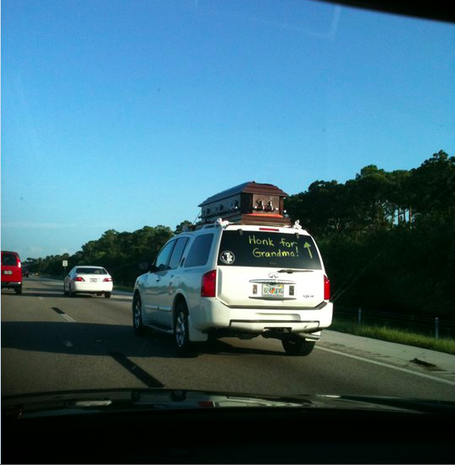 VERY IMPORTANT THINGS. We refuse to be cynical about Oregon's ever-changing uniforms because if we were 18, jacked as Jesus,capable of running a 4.5 and cornering on a dime, we'd want to look like a new super hero every week, too. Well, that and the prospect of just going in and out of the whoooshing Star Trek doors in the Oregon locker room would be too much to resist. Did we mention we're semi-mentally handicapped when it comes to what we really want in our heart of hearts, and that it's a good thing we have zero athletic talent? And that we'd be like Jared Allen with the mental foibles of Ron Artest and the bank account of Latrell Sprewell? Talent finds those who can handle it (mostly.)

MMMMM GEORGIA STATISTICS. Bill goes facefirst into Georgia's season, and comes up with enough optimism to suggest that things might (might) not be as bad as they seem in Athens. On a related note, you know that Les Miles was bumping Akon this weekend while sinking jump shots over his weeping daughter, and that this visual will haunt you like a Cormac McCarthy basement cannibalism scene.*

*Yes we did read The Road this weekend? And did we mention that it actually has a happy ending, sort of? Kind of? DON'T DISSUADE US THERE'S STILL ASH BLOWING THROUGH OUR BRAIN.

AND NEXT COMES MARRYING TURTLES.  George O'Leary, speaking at a UCF booster club meeting, suggests turning UCF into less of a brand all by itself, and more of a prefix or genetic ingredient hideous, 38-assed manatee monkey monster of a college football fan.

This year, head coach George O'Leary has a new plan to fill BHNS: invite the enemies and create hybrid fans.  "You should be a Gator-Knight," O'Leary told an audience at the Rotary Club of Orlando.

"If the Gators aren't playing, we're the hometown team.  I'm not telling you -- don't root for your team... But, Seminole-Knight, Hurricane-Knight.  Support your hometown team."

This way lies madness, George O'Leary: tribal cohesion eschewed, cultural identities blurred, and you grafted onto the soul of Floridian college football like some afterthought. Do you want to be the douchebag mini-fedora donned on the way out the door by a fashion-blind bro? Because that's what this would be. BTW, if you want the hometowners to root for their home team in Orlando, they already are doing just this, something you would have noticed if you'd bother to look at all the Ohio State car stickers in the area.

THOROUGH, THAT YOUNG MAN. Go to Chris' review of Swing Your Sword for the vintage Kentucky/LSU footage, and then stay for the thoughtful reflection on the evolution of the Air Raid.

AND THEN HE WAS...UM...WHAT'S THE WORD, NICE? Charlie Weis helped Sam Bradford out during the lockout, and all this niceness is getting really strange so please chew out a student assistant for failing to provide a golf cart quick enough or something so this can stop.

MMMMMM MISLEADING HEADLINES. But you go right ahead and roll with that, yo.

IT'S KOO-BE-YON. And it, like every other ATVS cooking special, looks fantastic, chere.