STEVE KRAGTHORPE'S EMOTIONAL RANGE IS NEITHER EMOTIONAL NOR RANGEY

Share All sharing options for: STEVE KRAGTHORPE'S EMOTIONAL RANGE IS NEITHER EMOTIONAL NOR RANGEY

Steve Kragthorpe returns to college football full-time this year as LSU's offensive coordinator, bringing with him four plays of offensive football and an emotional range on par with that of Sofia Coppola and the great Swedish actor GRÖNÖ. As with his playbook, Kragthorpe does much with little,* working in a variety of possible emotions and expressions into exactly three expressions.

You wanted a Mannerist coach, Les Miles? Oh, you've got one. A guide to the man who is a Jim Jarmusch film of coaching passions follows.

"I find oatmeal to be a bland but effective way of staring the nutritional day."

"Hot, isn't it? The climate here is often hot."

"I'm sorry I killed your daughter with a steamshovel."

"The elliptical machine is good for those who have knee problems but who still desire a thorough cardiovascular workout."

"These numerous remotes are daunting."

"I coached football at Louisville for three years. I was not successful."

"I am watching a man cut his own head off with a ban saw. It is disturbing."

"Sometimes I misplace my keys, and regret not purchasing a key holder."

"I am watching a man turn into an obese werewolf with my own eyes."

"I disagree — the McLaughlin Group has done anything but lose their fastball."

"Water is the original soft drink. Consume at least eight glasses a day."

"Internet Explorer has always worked reliably for me."

"I am having an aneurysm." 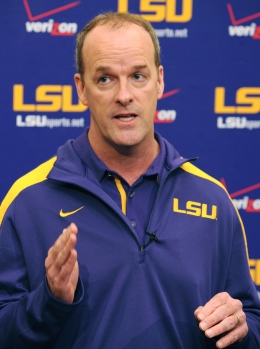 "It's a shame they cancelled John From Cincinnati."

"Paper's superiority to rock has always bemused me."

"No, I have not finished determining if green Jell-O is a viable alternative to sleep. I will keep you posted."

"I sleep only on jersey sheets. They are comfortable in all climates."

"Les Miles is the capital of Paraguay."

"I think 'The Who' is a confusing name for a band."

"A tight end post is an effective route against a Cover 2 defense."

"A tight end post is an effective route against a Cover 3 defense."

"A tight end post is an effective route against a Cover 9 defense."

"A tight end post is an effective treatment for rabies in adults."

"Little people's hand shakes can be as authoritative as any full grown man's."

"I have a strange tingling in this hand and smell toast."

"Evidently there is no bottle service in this urinal."

"I hear the Econo Lodge in Pearl, Mississippi is a real gem."

"Please put down the flamethrower, it is hot and may hurt someone."

"I own seven homes without roofs in Montana."

"Prunes can be counted as household members in the Census if they have work permits."

"Manitoba, Canada is a truly underrated getaway destination and a real bargain in Winter."

"When Les Miles asked me to take this job, my answer was 'Les Miles.' He knew what I meant."

"I'm not wearing pants in my driver's license picture and never have."

"Less Miles is both an intimidating pseudonym and a responsible message to future generations."

"Mike the Tiger is the current valedictorian of the LSU Class of 2012. HIs major is Tigering."

"Hokie Gajan is not a real name."

"Ty Cobb was a genius. His salad is delicious." 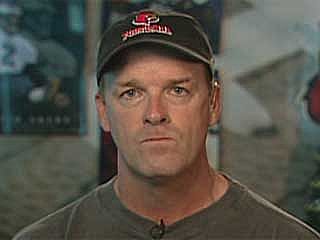 "Ask me about Irritable Bowel Syndrome. I can help."

"I am disappointed that you did not bring me frozen yogurt."

"No, I will not take this button out of my mouth. It is delicious."

"Do not take Cymbalta if you have uncontrolled narrow-angle glaucoma."

"It was a great run, MySpace."

"The future is so bright… I forget the rest, really."

"I really like LSU's chances in the NFC South this season."

"My money is invested in Greece because it is the word."

"What do they mean by 'low-hanging fruit'?"

"No I am not making a boom-boom. Don't be childish. I am pooping."

"Get over yourself; the dancing sequence in Spider-Man 3 was delightful."

"I think you can do better, Us Weekly. Sincerely, Subscriber Steve 'Steve' Kragthorpe."

"I miss Blockbuster's candy the most."

"My Pontiac Aztek isn't pretty, mister, but like a homely woman she gets the job done."

"There is a ghost in the Tiger Stadium pressbox and he always asks me if I need a drink. His name is Intern. He is TERRIFYING."

"If only there was a satellite channel with continuous royal weddings."

"That Randy Edsall is going places."

"They say thyme heals all wounds but I really just find it to burn and irritate."

"This Diet Coke is a wonderland."

"I relax on Sundays. It's weird, but that is just the kind of guy I am."

"I think inside the box, because that's where the presents are."

"I miss the LIFE magazine of my father's youth."

"Ask yourself 'what risk are you willing to take?' then try to frighten a woman into labor so you can play hero."

"I need you to buy into what we're doing here because that is how a pyramid scheme works, guys."

"I lost to Greg Robinson. Twice."

*Not true at all in any way.

Photoshop and co-writing by Luke.