FULMER CUPDATE: ILLINOIS IS NOT BIG ON RESEARCH

Share All sharing options for: FULMER CUPDATE: ILLINOIS IS NOT BIG ON RESEARCH

We don't understand homophobia as a matter of simple arithmetic. If you haven't watched enough television to understand gay men, we will bring you up to speed. They tend to be fit, well-groomed, and stylish. They hang out with single girls who just want the love of Mr. Perfect, and commiserate with them in humorous dialogues conducted at camera-friendly bars. They always have the boyfriend drama! Everything we know about gay men we learned from viewings of Will and Grace, and this is also why we have an unnatural attraction to Megan Mullally. (Her character is a wealthy libertine drunk. DO THE MATH.)

So if gay dudes want to be gay, and excepting the obvious arguments about other people's business not affecting yours in the pants department, it makes sense to want more gay guys around if you're single since more gay dudes = less competition on your straight guy part. You also get restaurants, and nice lawns, and maybe a Trader Joe's close to your house.

All wins in all directions, but some young men seem to disagree. One of them is Illinois DT Chris Jones.

Jones was arrested just after midnight Sunday after two men reported that he punched them outside a local bar, Champaign police Deputy Chief Troy Daniels said. The men said Jones, a 6-foot-5, 310-pound defensive lineman, had been in a car that had just driven by them.

"The occupants of the vehicle were calling out slurs based on their sexual orientation," Daniels said, explaining that the men said they were a couple.

Ah, let's see if you get a bakery for dog treats in your neighborhood anytime soon, dude. This obviously inhumane act against two men who literally do not add up to one of you is worth quite a few Fulmer Cup points, and we'll get to that later, but let us also note that Jones won't get a hate crime prosecution because the sentence for aggravated battery is longer, and prosecutors sort of like to put people away for as long as possible. (See case of Prosecutors gotta prosecute.)

But wait there's cocaine involved hey cocaine wassup been a while-

Court records from Duval County, Fla., which includes Jones' hometown, show he pleaded guilty in July 2010 to cocaine possession and was sentenced to 60 days of unsupervised probation.

Brown initially said Zook and the Illini coaching staff knew about the conviction when Jones signed his letter of intent in February to attend Illinois. He said later he had learned the coaching staff wasn't aware of Jones' cocaine conviction.

That is correct: the Illinois coaching staff did not know about their player's previous arrest for cocaine possession. Other words would follow here, but just let that one sizzle on the brainpan for a while while you look at this picture of the Illinois head coach in a moment produced with only the natural stimulants flowing through his bloodstream at all times. 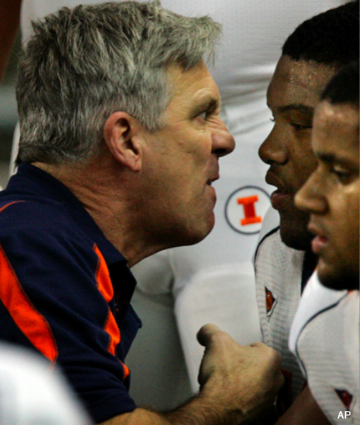