AJ MCCARRON ONLY DATES GIRLS WHO HAVE BEEN TAKEN OVER BY THE FLOOD. 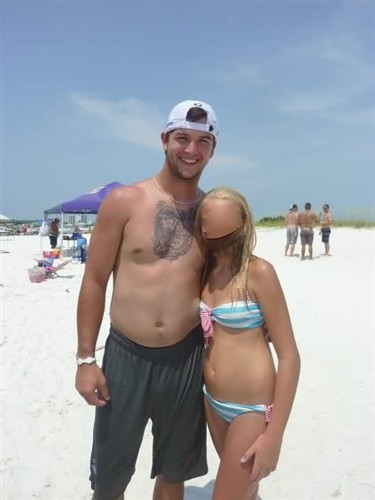 It's not enough to point out a ridiculous tattoo on an Alabama football player, or note that up close the Jesus here looks a lot like something the tat artist took off an Iron and Wine album cover.  It's not enough to note that AJ McCarron, Alabama's soon-to-be-starting-qb, appears to have been training with Tom Brady's collegiate strength coaches. No, you must note that AJ McCarron, in addition to being serious enough about getting a tat to put it on an extremely painful place like right on the sternum, only dates women who have been infected with the Flood and/or are from the movie Jacob's Ladder. Demon-alien girls of Alabama, please take note and primp accordingly. (Also via the good Dr.)

P.S. If you're hoping to knock him out of a game this fall by spearing him in the chest with a helmet, SEC defenders, try a different body part. There are no longer any nerves in his chest, something Saban undoubtedly planned well ahead of the season for exactly this purpose.

STAPLES FOR ALL YOUR CHEATING NEEDS. This really is a better way to do it, but he should mention to only pay in cash. The fun part about pieces like this: you get to mention something that you know a shady coach or two actually does, which Andy puts in at the end when talking about the prepaid phones coaches use as their untraceable "hot phone." Oh, and yeah, don't write lacy notes to dudes thanking them for their "services." That's bad. (He's also got a nice piece on the Michael McAdoo suit, as well.)

CERTAINLY THEY'RE FLOCKING FOR THE OPPORTUNITY TO WORK WITH HOUSTON NUTT.  In a piece about colleges nabbing an increasing slice of NFL assistants, Mark Richt basically just says he's never hiring Bryan Van Gorder to do anything ever again:

"A lot of times those guys are on two-year contracts," Richt said recently at the SEC spring meetings in Destin. "If they get fired after a year, they're looking to come back for a year and the next year a job comes up (back in the NFL) and they are gone.''

Then Mark Richt goes on to explain why he hired two NFL assistants who are of course totally different than those other dudes. We say this as someone whose defensive coordinator and offensive coordinator are both former NFL coordinators who may, at any instant, run back to the NFL because they like watching tape 22 hours a day and taking years off their lives in the process.

SKIP HOLTZ PROBABLY GETS THE SMOKED MULLET POOS WITH REGULARITY NOW. BBill C's USF preview has the usual statistical goods, but also mentions this fun and extremely important bit from their schedule: in one brutal stretch in Octoberish, they play exactly one home game in 55 days of schedule. This should abate the relentless shits one gets from eating Tampa Bay's greatest delicacy, smoked mullet dip, though it is the weight loss plan of fishing drunks and has been for decades. (Speaking of pooping yourselves, they also open in South Bend against Notre Dame, a game that both teams could claim as a disappointment if they lose.)

NO BALLER CHAMPAGNE COOLERS BUT MAN LOOK AT THAT SHOWER. Generic rich guy fixtures are the rule at Rich Rodriguez's old house in Ann Arbor, but please note that enormous shower. It's big enough for three, possibly four people, and hey, this picture just feels so...unbloggy. One second, please. 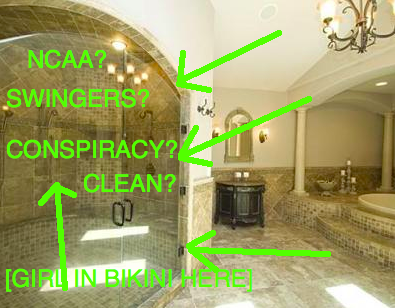 Whew, that feels SO much better.

JADEVEON CLOWNEY IS ENROLLED PLEASE MOVE YOUR CARS AND LOVED ONES FROM HIS PATH. The number one recruit from the class of 2011 is enrolled after some fretting over his eligibility, and doing his best to avoid crushing things people leave in his path like children, flowers, and most of the city of Columbia, South Carolina.

THE MOST MINOR NCAA VIOLATIONS OF THIS WEEK BELONG TO: Nebraska, who distributed 28K worth of improperly benefited books to student-athletes from 2007-2010. We're sure almost all of these were Bill Callahan distributing this subtle message to his troops in advance of his impending and merciful firing. (Nebraska's already had everyone pay back everything, and seriously this is not a huge deal and now that we've written that watch Bo Pelini get the death penalty for this.)

BUT YOU'RE STILL WITH ME, RIGHT? "If that guy weren't in jail, I'd totally be sleeping with him, not you." "Yeah, but where are you right now? Huh? Huh?" [points to penis] [nods]