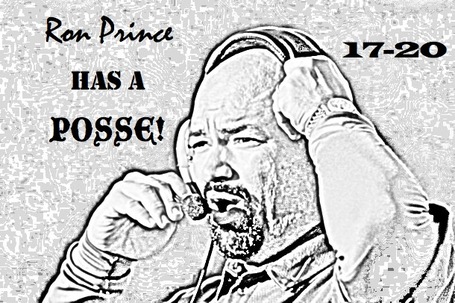 Like Andre the Giant before him, Ron Prince has a posse. Although among current head coaches, only Vandy's James Franklin (1) can proudly claim to be a direct disciple of the Prince of Punt, nearly all of the FBS's programs are led by men with more than a little Prince in them. Behold...

Prior to bringing his genius to Kansas State (and then again after he was taken too soon) Prince served under the incomparable Al Groh at Virginia. There, Groh mentored Miami's Al Golden (2) and his own successor, Mike London (3.) Both men were on Tom O'Brien's (4) staff at BC, as were the Eagles' current man Frank Spaziani (5) and Don Treadwell (6) of Miami-Ohio. Treadwell learned his craft at the knees of Brady Hoke (7) at Ball State and Mark Dantonio (8) at Michigan State and Cincinnati, where he also spent some quality time with Notre Dame's Brian Kelly (9.) Dantonio labored under Bama's Nick Saban (10) while with the Spartans, thus bridging the gap between Prince's legacy of greatness and Saban's immensely less impressive coaching tree.

Dave Christensen (11,) Derek Dooley (12,) Jimbo Fisher (13) and Will Muschamp (14) studied under Little Nicky (Wyoming's Christensen at Toledo, Dooley, Fisher and Muschamp at LSU.) The Gators' coach, of course, recently left Texas' Mack Brown (15) without a coach-in-waiting, but not before coaching up Texas Tech's Tommy Tuberville's (16) defense at Auburn. Also fleeing Tuberville's Plains for greener pastures were the Razorback's Bobby Petrino (17,) Paul Rhodes (18) of Iowa State, and Auburn's own Gene Chizik (19.) Tuberville himself learned a thing or two from Dennis Erickson (20) while at Miami; Erickson, in turn, had under his wing Mario Cristobal (21,) Greg McMackin (22,) Paul Wulff (23,) and Kevin Sumlin (24.) Sumlin's no Ron Prince (who amongst us is?) but he did give the coaching world Dana Holgersen (25,) and learned the coaching ropes from both Mike Price (26) at Washington State and Bob Stoops (27) at Oklahoma.

Impressed yet with King Prince's posse? You shouldn't be, for ye have only peeked upon its full grandeur!!!

Arizona's Mike Stoops (28) was, naturally schooled by brother Bob, as was Indiana's Kevin Wilson (29) and Nebraska's Bo Pelini (30.) The elder Stoops, in turn, picked up some tricks of the trade from Bill Snyder (31) at Kansas State (Ron's predecessor there gave us Wisconsin's Bret Bielema (32) and Steve Spurrier (33,) who foisted upon us NAME REDACTED (34,) as well as Middle Tennessee's Rick Stockstill (35,) Western Michigan's Bill Cubit (36,) and Louisville's Charlie Strong (37.) Strong's last boss at Florida was Urban Meyer (who also had on his cadre the awesomely named Doc Holliday (38) of Marshall, Kyle Whittingham (39) of Utah, Gary Anderson (40) of Utah State, Steve (Goddamn) Addazio (41) of Temple, Dan McCarney (42) of North Texas, Dan Mullen (43) of Mississippi State and Tim Beckman (44) of Toledo...an almost Prince-like lineage!) Beckman, it bears mentioning, worked for a 40 year old Mike Gundy (45) at Oklahoma State, a protege of LSU's Les Miles (46.)

Now that the Mad Hatter has been introduced, you know things are about to get complicated.

Everyone knows that Miles is a Schembechler man, but did you know that he also studied under Bill McCartney at Colorado? Or that the Buffs' Jon Embree (47) and former Buffs' head man Rick Neuheisel (48) (who names UNLV's Bobby Hauck (49) as a student) also toiled for the Boulder Bible-thumper? Miles had the previously-mentioned Jimbo Fisher on his staff at LSU, whose days as an understudy are over now that Bobby Bowden has been put out to stud. Bowden previously sired USF's Skip Holtz (50)...not literally, of course...and Georgia's Mark Richt (51,) who also includes Howard Schnellenberger (52) as a mentor. Schnelly, who played and coached for The Bear (that's right...Ron Prince is the legitimate equal of coaching royalty,) passed along his sage life and coaching wisdom to Danny Hope (53) of Purdue.

Back to St. Bobby for a moment. While Skip may not be a product of his loins, Terry and Tommy obviously were. Terry would go on to share daddy's knowledge with UAB's Neil Callaway (54) while Tommy did the same for his successor at Clemson, Dabo Swinney (55.) Dabo never worked for the Bear at Alabama, but he did learn some pointers from the next best thing, Dennis Franchione! The Franchise paid it forward by mentoring Rice's David Bailiff (56,) as did TCU's Gary Patterson (57.) Patterson served some time at Utah State under Charlie Weatherbie along with current New Mexico State top man DeWayne Walker (58,) who once waxed Pete Carroll's surfboard at USC.

Steve Sarkisian (59) and...wait for it...Lane Kiffin (60) both slaved for Carroll at USC, thus proving the long-suspected Kiffin-Prince cosmic connection. Lane's own coaching tree is only slightly less glorious than Ron's. His right-hand man Ed Orgeron held Arkansas State's Hugh Freeze's (61) hand at Ole Miss, and his boss at Fresno State, Pat Hill (62) graduated Ruffin McNeil (63) and Jeff Tedford (64) to the big leagues. Neither man, however, was a single-source learner. Tedford was on Mike Bellotti's staff at Oregon (as was Chip Kelly (65) and Chris Petersen (66,) and McNeil inherited some coaching know-how from the criminally-unemployed Mike Leach. When the Dread Pirate Leach drops anchor again he'll rejoin the ranks of those he helped promote, such as Art Briles (67) of Baylor or Sonny Dykes (68) at Louisiana Tech.

Surely we've exhausted the roster of Ron Prince's posse by now, you say? Not even close! Stop interrupting!!!

Ron Ianello (69) and David Cutcliffe (70) both sat at Charlie Weis' buffet table at Notre Dame; Weis is now teaching Florida's Muschamp "the Way of the Prince."

Jeff Quinn (71,) Dan Enos (72,) and Butch Jones (73) are all Brian Kelly disciples, and Notre Dame Nation can only hope their current coach reaches the heights attained by his Goateed Guru.

Idaho's Rob Akey (74) is kin by virtue of his time at Washington State under Mike Price. Louisiana-Lafayette boss Mark Hudspeth (75) is a legacy of Dan Mullen. Memphis' Larry Porter (76) can thank Les Miles for his membership. NAME REDACTED brought Mike Locksley (77) of New Mexico and Larry Fedora (78) of Southern Miss to the party.

Did we mention that Fedora was on Fisher DeBerry's team at Air Force? Fedora brags about it all the time, since Prince Party People Troy Calhoun (79) and Jim Grobe (80) were also DeBerry underlings. Jim Tressel surely picked up some Princely magic from Tim Beckman, Paul Rhodes and Mark Dantonio, and passed it along to Darrell Hazell (81) and, Buckeyes can only hope, Luke Fickell (82.) Fickell's old coach, the legendary John Cooper, is also a Princely man thanks to Tulsa's Bill Blankenship (83.)

Can Ron Prince possibly have 100 head coaches in his posse? As the Master of Manhattan was found of saying, "huh?" Before Schembechler (who begat Lloyd Carr who begat Ron English (84) protegee Jim Harbaugh bolted Stanford, he indoctrinated Brady Hoke, Willie Taggart (85) and David Shaw (86.) R.C. Slocum, mentor to club members Tommy Tuberville and Kevin Sumlin, also brought Texas A&M's Mike Sherman (87) and Bob Toledo (88) to the dance. Tulane's Toledo was old drinking buddies with Pat Dye at Auburn (as was Larry Blakeney (89) of Troy,) and thus could go shot for shot with a lightweight like Rocky Long (90) while Toldeo was at UCLA. Perhaps because of his alcohol abuse, Toldedo was know to swing both ways, and thus had no issue working at USC for John Robinson, a clean-living man who made Oregon State's Mike Riley (91) and Navy's Ken Niumatalolo (92) the men they are today. Then again, maybe it was Niumatalolo's old coach and Prince clone Paul Johnson (93) who contributed more to his success.

Speaking of success, it could be argued that no man's fortune was more influenced by Prince than his biggest fan, Joe Paterno (94...actual age.) JoPa was introduced to his hero by Al Golden and Frank Spaziani, and did his pals Paul Pasqualoni (95) and Greg Schiano (96) a solid by welcoming them into the Princeter's world. Schiano brought Butch Davis (97) into that same world (who did the same for Larry Coker) during their time together at Miami, where he lived for a time in Jimmy Johnson's. Double J in turn molded Houston Nutt (98) into a even-keeled leader of men. The cocaine-fueled Coker, on the other hand, took a hands-off approach with Louisiana-Monroe's Todd Berry (99.)

Berry schooled Johnny Majors in the "Tau of Ron" at Tennessee, who was Yoda to Kirk Ferentz's (100) Luke at Pitt and Princess Leah to Phil Fulmer's Jabba the Hut at Knoxville. Fulmer was known to regurgitate Princisms to Bowling Green's Dave Clawson (101) and Syracuse's Doug Marrone (102.) Marrone was a George O'Leary (103) guy at Georgia Tech, along with Randy Edsall (104.) O'Leary was thrust upon us by Bobby Ross, who also happily added Mike MacIntyre (105) to the mix.

Sadly, there are still an unfortunate few head coaches who have yet to be exposed to the greatness that is Ron Prince (who is waiting by the phone should any opening present itself that might rectify the situation.) Rich Ellerson (Army,) Pete Lembo (Ball State,) Bronco Mendenhall (BYU,) Steve Fairchild (Colorado State,) Turner Gill (Kansas,) Joker Phillips (Kentucky,) Jerry Kill (Minnesota,) Gary Pinkell (Missouri,) Chris Ault (Nevada,) Dave Douren (N. Illinois,)* Pat Fitzgerald (Northwestern,) Frank Solich (Ohio,) Todd Graham (Pitt,) June Jones (SMU,) and Frank Beamer (VT) are not currently in the posse, which no doubt explains their combined tally of zero national championships. Fans and alum of these institutions should suggest, nay, demand that His Hairlessness be added to the staff!

Note: Apologies to Pat Forde for the use of bold, numbered entries.

*Update: After posting this article I discovered an error I am happy to rectify: Northern Illinois' Dave Douren (106) IS a card-carrying member of the Prince Posse, as he's a legacy from Bret Bielema's Wisconsin pledge class.