Share All sharing options for: A SUMMARY OF BIG TEN MEDIA DAYS

Hey, we wrote about Butch Davis, too. YAY PRODUCTIVITY. Onward:

We've been watching Big Ten Media Day and feel like there are some key differences between Big Ten Media Day and other conference media smorgasbords. It is true: not one reporter will say "we" when referring to a team, and the goings-on happen without subpoenas flying, coaches sniping at each other, or any of the manufactured drama you might see at certain other conferences' overblown media confabs. We speak of course of the C-USA Media Days. Get your shit together, guys.

It's tidy, as well: 15 minute sessions of relatively event-free questioning, and done in a day including presentations by Sam the Eagle and various conference types. You can watch the whole thing without losing your sanity, and even review it in a series of easy bullets.

[NAME REDACTED] Did not watch on principle. He did cite that he is third in the conference in tenure, and this fact alone should make you weep for the future of the Big Ten and humanity itself. He probably also said something about excitement, and acted twice as [REDACTED]-y to make up for the loss of fellow DERP pilgrim Tim Brewster at the proceedings this year.

BRET BIELEMA.You have to admire Bret Bielema for many reasons. He withstood the pressure of becoming the successor to Barry Alvarez and improved on his master's work, taking Wisconsin to the Rose Bowl in 2010 and maintaining the high standards of his predecessor while seeking to modernize Wisconsin's facilities and training methods. He also made it to Big Ten Media days after drinking in the sun for three days straight on a barge with Polish boatmen, a feat whose difficulty cannot be gauged. 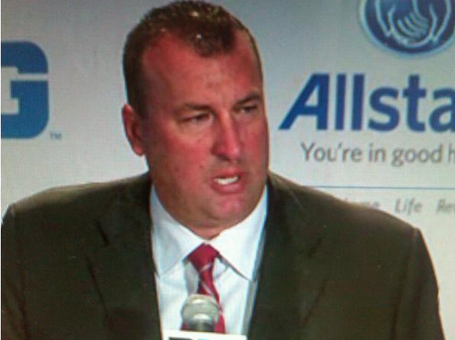 DANNY HOPE. Looked like a cop, but he always does. Said "we have two good quarterbacks" with a straight face, which is some next level coaching business right there. Talked a lot about his amazing kicker, and though Purdue does have an outstanding field goal kicker, this is the most Purdue thing to talk about at your presser ever. 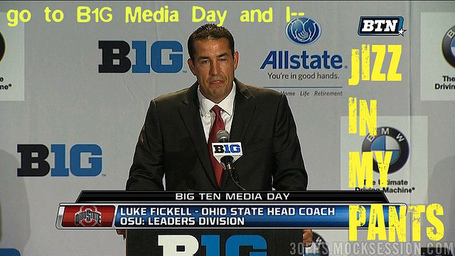 It's no one's fault when that happens if they're standing within ten feet of Tom Dienhart. [/fans self] Fickell was fine. Vague, and a little hopped up, but fine.

KEVIN WILSON: Did not break down into open weeping while discussing his job coaching Indiana football. Has not regrown mustache, however, and loses points no matter how brave he appeared in the face of an impending season in Bloomington. (Further bonus; no open mentions of suicide.)

JOE PATERNO: Appeared to be completely aware of his surroundings, cited his close personal friend Socrates in discussing the youth of today, yelled as politely as one can to reporters to speak up, happily admitted ignorance on the new taunting rules, and whaddya'd away talk of collegiate scandal with an unimpressed "eh, there's always been that" attitude befitting someone who once coached in the same state with Jackie Sherrill and survived. Did not die on podium, and don't act like you weren't relieved this didn't happen. He's very old, and it's a concern, especially if you want him to go out like a Viking on the field after a victory like we do.

BRADY HOKE: The best summary of a Brady Hoke speaking engagement is to imagine Lloyd Carr using a gigantic Matt Foley puppet to address the media. The similarity in cadence is eerie, right down to repeated citations of "We're Michigan" as a justification for just about any statement Hoke wanted to make. ("I should have a large pizza up here hot and fresh right now. Why? Because we're Michigan, that's why.")  It's now all too clear why Dave Brandon hired him: because they thought he was a fat cousin of Lloyd Carr, or at least come Lama-ish future incarnation of his still-living spirit raised in the deep obese South or something.

He was fine, but seriously, this cast of coaches is the exact opposite from the polished evangelists of the SEC. Hoke looked like he'd smeared his hair flat with some half-and-half he'd gotten from the media's coffee bar.

BO PELINI. You might have said "Taylor Martinez is outstanding at quarterback, and has really grown into a leadership role," but we saw your face saying "i hate Taylor Martinez and want to throw him in a pit of hungry pigs," Bo Pelini. Still, you probably can't help it. Bo Pelini saying "I hope you die and I want to help you do so" is really his way of saying "I love you." Confusingly, this is also his way of saying "I'd like to order some Chicken Chow Mein, please." Bo Pelini has a fraught and emotional relationship with his players, and with the Chinese restaurants of Lincoln, Nebraska.

KIRK FERENTZ.  "I'd like to answer that, but I've been on vacation for three weeks." That, and 14 minutes and 47 seconds of white noise.

JERRY KILL.  "I believe you have to run the ball. I believe that in my heart." Oh, you'll wet the panties of the natives talking like that, Jerry Kill. That's the only way you'll do it besides coaching awesome football, too, because you really do look like a sunburnt Gopher with alopecia. (But are awesome.)

Grade: A PLUS PERFORMANCE OF THE DAY.

MARK DANTONIO.  Said Jim Tressel, his mentor, was "a tragic hero, but a lot of tragic heroes triumph in the end." Just like that part at the end of Hamlet when he gets up, spits out the poison, goes "I looooooooooove Kool-Aid!," and stabs Voldemort before killing Scar and becoming the leader of all the Goonies on Jurassic Island? Yes. Exactly like that.