Share All sharing options for: THE WORST POSSIBLE LIST OF CANDIDATES WE COULD COMPILE FOR BUTCH DAVIS' REPLACEMENT 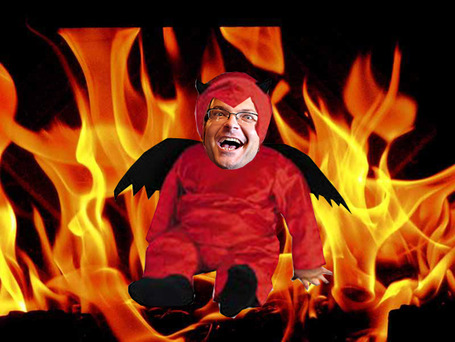 We don't hate you, North Carolina. It just so happens that every time a coach is fired, this malevolent part of our brain starts spitting out names. Horrible names, the worst possible names we can think of for your coaching vacancies, management malignancies you wouldn't wish on Hitler's Intramural Team, disasters who left in their wake such destruction as to make Howard Schnellenberger himself shy away from the rebuilding and football detox process involved.

Let there be no lies. It's because we're horrible people that we do this, and because saying the words "Dick Jauron, UNC head coaching candidate" makes us laugh until we start peeing a little. Your Devil's Human Resources Consultant recommends the following to replace Butch Davis as your head coach:

Watson Brown. He coached Vanderbilt. Twice. Technically, there's nothing you can do to him that hasn't already been done.

Greg Robinson. The Little Engine That Could (Derail And Kill Your Program And Seventeen Innocent Civilians.)

Dan Henning. Oversaw a sports betting scandal where his Boston College players bet against their own team. If that and a peripatetic 30 year NFL career doesn't inspire, maybe the words "Jake Delhomme's FAILsherpa" will.

Dick Jauron. One winning season as an NFL coach, a Yale degree, and the blind confidence of other horrible football coaches? It's destiny!

While with the Bears, Shoop became known and sometimes criticized for a conservative play-calling strategy that focused on running plays and safe, short passes, often even when long third-down conversions were necessary.

The emphasis is the author's. Added bonus: he's already on your payroll! Short him a check or two. Then, when he confronts you about it, say "Listen, I realize you needed $45,000 to keep your household accounts, but we drew up a plan to give you $30,000. It'll just have to get to the sticks from there, so to speak."

John Mackovic. You say "inspired a player mutiny at Arizona," we say "encouraged player buy-in through team ownership of team identity." He beat Nebraska that one time when they were all off-cycle and de-roided and emotional, too!

/rides out of bad practice on Harley

/Roy Williams is given massive raise

Dennis Franchione. "I'd love to answer that interview question, but you'll have to pay for my subscription newsletter to find out how I would indeed organize the team schedule for the University of North Carolina football team."

Chanathan Gailey The Fourth. "Oatmeal? Oh, my, I do like spicy foods."

Bobby Ross. As much as you might hate what he does to a football team, it pales in comparison to how much he hates himself, and that's what really makes him special.

Tom O'Brien. It is inevitable, since Tom O'Brien will eventually coach every ACC team for at least one year.

Dan Hawkins. It's a long way from the slow white tight end reserves of Idaho, but dammit he'll find a way to get them to Chapel Hill, buddy.

Mike Locksley. Have you ever seen a man punch a live ram? Do you want to?

Tommy West. It wouldn't be dull.

They had a discussion off camera about this and Tommy West literally screamed out his favorite Korn song verse ♪Feelin'﻿ like a freak on a leash♪ and hit Jackie Sherrill upside his head with a trash can lid. I saw all of this and was shocked.

He even took the time to type in the notes. Somewhere, in a bank full of internet points, you have a fortune waiting, anonymous commenter.

Brad Scott. Will sleep in his office to get the job done. Hours of sleeping unspecified, possibly random.

Jeff Bowden. Can install his offense in five minutes, and get it off the field in even less time.

Ruffin McNeil. "I can promise you only blood, ass-sweat, and tears, Tarheels." 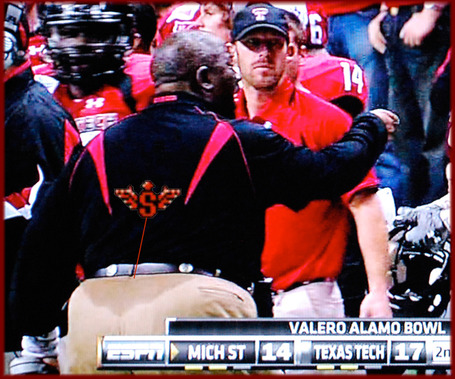 Frank Broyles. Really, we just want this for the press conferences, and because he'd run the 'bone while sipping a nice iced tea and napping for the entire third quarter.

David Lee. If the Houston Nutt Coaching Tree falls in a forest, IT FALLS ON YOU.

Jackie Sherrill. Two years of scorching glory, and then mostly just scorching after that. #THEKANG

Tim Brewster. For when you want [NAME REDACTED], but can't afford to wait until he's fired from Illinois.

Rick Neuheisel. Fun fact: The Talented Mr. Ripley is based on his life story.

Tyrone Willingham.  HAHAHAH we kid we are cruel but not monsters.

Keith Gilbertson. Thrown in for free if you agree to the "University of Washington Mistakes" package by taking all three in a row.

Woody Widenhofer. "You can have the job, but you must coach from a tollbooth."

/raises gate to let subs on and off the bench

Mike Shula. "This is my resume. I'll be awaiting your call."

Terry Allen. "I think 235 pound offensive linemen are the wave of the future."

Butch Davis. "Thrilled to be following in the footsteps of such illustrious coaching royalty, y'all."