Share All sharing options for: JUST ANOTHER DAY AT BROLENTANGY GENERAL HOSPITAL

Dear TV Producers: I am a recently hired football coach who is interested in television shows. I made a script for a pilot. I think you will like it. It is called "BROLENTANGY GENERAL." It is about two sick bros who run a football program and who are also surgeons. They have problems with girls like everyone else. I think it's appeal is universal. My asking price is $1.8 million for the pilot. That may seem like a lot of money but I am prepared to bargain. 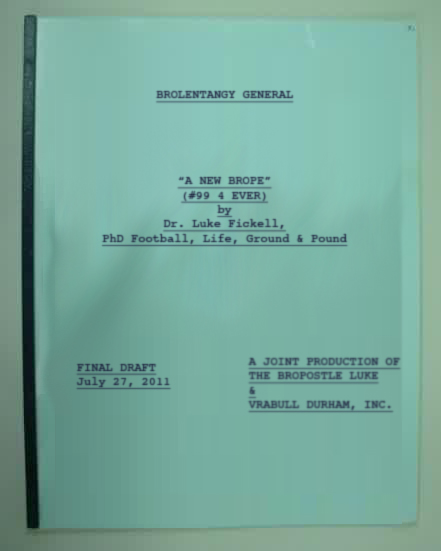 SKINNY NURSE WITH A TAN AND IS BLONDE AND HAS A HUGE RACK.:

I NEED A CRASH CAR, STAT!

The patient shakes. She is desperately clinging to life but flirting with the end with desperation. Some nervous pacing third year medical student is walking around like a girl. He wants to put the IV bag in but he's a pussy and won't stick it in a vein because he hates blood and is a bad doctor. He went to Michgan.

A car crashes through the wall. This is the CRASH CAR. Without another moment's notice, into the ER comes Dr. Fickell. 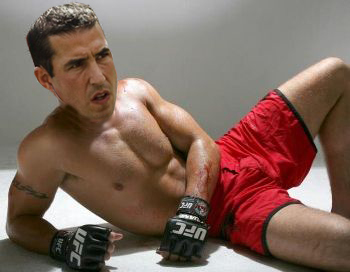 DR. FICKELL turns to greet COOL BLACK JANITOR. They do a really complex handshake. COOL BLACK JANITOR is impressed. Dr. Fickell throws the two gloves together forming a diamond to reveal a BLOCK O insignia with his hands

I've got gloves on. My skin is fresh and clean. I am covered in Axe Body Spray which is a natural disinfectant. NO TIME FOR THINKING. Do you see that other guy across from you? In the opposite corner? HE THINKS YOU'RE WEAK WILLED. HE THINKS YOU'RE READY TO QUIT. HE LOOKED INTO YOU SOUL AND YOU KNOW WHAT HE SAW?

HE SEES A COWARD. That's what he sees, bro.

Dr. Fickell goes to half-guard on the the patient on the gurney, but then starts to put her into a rear naked choke.

JESUS DIDN'T TAP BRO, AND NEITHER WILL YOU.

NURSE WHO ISN'T HOT AND WHO HAS CANKLES AND IS OLD

Dr. Fickell! This is EXTREMELY unorthodox and highly inappropriate.

Your fear is inappropriate. We're gonna need a specialist or else the prognosis is dead. GET ME DR. PROFESSOR. VRABRO!

Into the room runs a similarly unclothed athletically built individual who announces his presence with a ruckus back flip. He's kind of fat, though, and not as ripped as DR. FICKELL. They're both okay with this, though.

What the hell is going on?!? 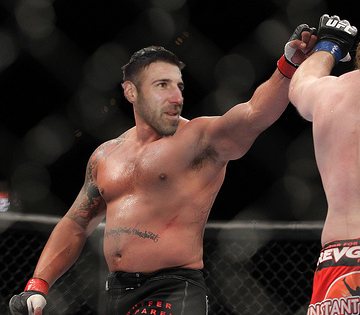 Why is a brain surgeon in the room? This woman has a collapsed lung and is fighting off respiratory failure.

Breathe, lady. Take in that oxygen. it's a power anti-anxiety technique that should lower the blood pressure and get that adrenaline in check. its an ally, not an impediment.

CANKLES NURSE WHO'S ALL UPTIGHT AND SHIT

Dr, that's precisely the problem. This woman CAN'T breathe, and you're trying to zen heal her while your associate squeezes the life out of her?

You're only as good as your last surgery. Styles make operations. You can never count out Mike VraBRO.

Doctors! THIS. MAN. IS. DYING.

Dr. Fickell spits into a bucket and puts his mouthpiece in.

Dammit, that's a fresh heart! Jesus, watch where you spit.

HERB DEAN OUT OF NOWHERE.

DR. PROFESSOR VRABRO lunges with a scalpel in each hand lunging towards the patient when inexplicably Dr. Fickell counters mid-air and pins the surgeon.

The nurses check the woman who was dying but who isn't because she's too turned on to die now even while unconscious. DR. PROFESSOR VRABRO puts Fickell to sleep, gets up, and wraps himself in an IV tube as though it were a championship belt.

We've got the situation under control, no thanks to either of you gentlemen. Security!

Fickell pops up like nothing happened because his recovery is amazing.

You thinking what I'm thinking?

They flex and yell together.

HOT TIRED NURSE FROM THE BEGINNING REMEMBER HER?

This place is so much sexier than when Dr. Tressel ran it.

You said it. Let's make out.

They kiss. It's hot.

Just another day at Brolentangy General.

Disturbed plays over the credits.