THAT'S NOT AT ALL DISPELLING ANY CURRENT CONSPIRACY THEORIES 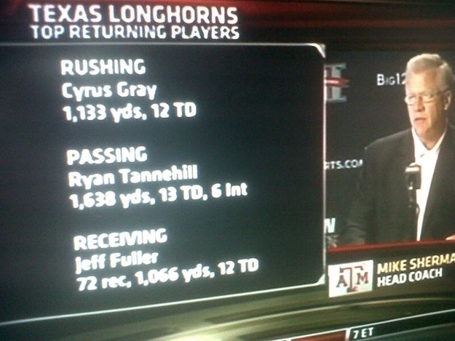 The NCAA may want to have a conversation about the Longhorn Network, and Texas A&M may refuse to give it so much as an ounce of content in the form of an interview, but when you've angered Gary Pinkel? Oh, you best believe Gary Pinkel is coming, and he's bringing hell with him.

Then there was Missouri coach Gary Pinkel, who while on the podium called the concept "a lack of common sense" but elaborated more strongly later to a few reporters.

"What are we doing here?" said Pinkel, later saying that the reformatted league needs every member to act in the conference's best interests. "If you don't want to do that, then become an independent. Go do what you've got to do."

Asked if he felt a sense of cohesion in the conference, he said, "Yeah — until what happened last week happened."

He then left the studio and said "I want a divorce." ESPN Texas, we knew you were the Yoko of the Big 12. We just didn't think it would happen this quickly.

IN THE CRATE AND BARREL CONFERENCE, WE HAVE A GRUMPY WIDDLE COACH DON'T WE. We will tell you this as many times as necessary, but nothing in any EDSBS depiction of Paul Johnson and his insane level of disregard for you, him, her, and the universe in general is fictional. We are documentarians, and nothing more. Meanwhile, Dabo Swinney is "confident," just in case you wonder how someone named "Dabo" has accomplished so much in life.

BECAUSE YOU'RE DIFFERENT THAN EVERY OTHER TEAM AND/OR RIVALRY. The last thing we would want is excitement and drunken passion. BUT THEY TRASHED THE CAMPUS. Sure they did. BUT MICHIGAN IS A DIFFERENT PLACE. Yes, it's unlike any other place on the planet, we're sure, and can't handle a rivalry game at night like every other school on the planet. They can't handle passion, because THAT'S JUST HOW INSANELY PASSIONATE THEY ALREADY ARE.

MANNY DIAZ IS A DEVIOUS BASTARD. The Cover 3 pattern read defense that looks like a Cover 2 coming off the ball? You are a sneaky man, Manny Diaz. BTW, the fun part about this defense is that you can, with some negligence by the defense, beat it with the simplest play in the book: four verticals.

IF FOR NO OTHER REASON: Listen to people on Slate discuss the SEC at the 36 minute mark, and marvel at the only mention of the peasantry's conference on Slate.com ever. We would totally watch a 30 for 30 on Terry Bowden's undefeated year at Auburn.

LES MILES IS A THINKER. There's proof in word clouds and everything.

TEAM LEACH CONTINUES THEIR CAMPAIGN. The Solid Verbal has the Pirate King on, and he does not disappoint, though Dan pronouncing Hal Mumme as "Mum" is beyond entertaining all by itself.

AND YOU DISPARAGE SOCCER PLAYERS. How can you when they establish Twitter greatness with only their second tweet?