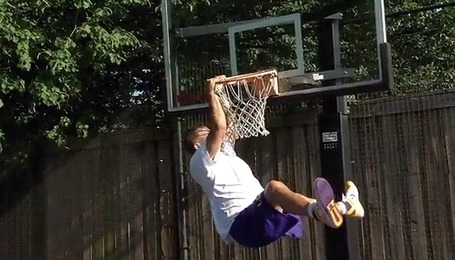 Yes, Les Miles did that dunk with no stunt doubles. You want to know important things about the Willie Lyles case? Sorry, that's an ongoing investigation, and one that they cannot by rule comment on at the moment. Are you curious as to why Russell Shepard was a late scratch on the media day player contingent, replaced by T-Bob Hebert? You won't hear much from Miles, who said Shepard "had some things to take care of back in Baton Rouge." (By that he means some sort of off-campus housing issue of some sort, most likely.) Like everyone else, Les Miles likes his defensive unit's speed, and is looking forward to the season. Blockquote. Something everyone else has said. Harumph.

The fun part with Miles is him being Les Miles, something he does without trying because there is no other option. He entered the room and sat in the moderator's seat confidently. He appeared poised, confident, and ready to address the crowd. He was also sitting in the wrong place, and for all we know was just being polite and waiting for the moderator to cue him, but that's the best part: everyone in the room laughed because Les Miles would strut in and with the utmost assurance take the wrong chair. He would get visibly annoyed that the editor on the Les Miles Basketball Video cut the entire length of his daughter's national anthem. He would make a statement that suggested he knew what artificial turf tasted like. He would embody the entire internet by the name of one commenter named "Slick Willy," a name that is undoubtedly Les Miles' name for anyone shady portrayed in instructional moral tales told to his children or players.

"And then Slick Willy thought he was clever by siphoning the gas out of the gas tank, and that's why you always wrap a live rattlesnake around your gas cap. If you survive the first four bites, the fifth is like a shot of expresso. Don't correct my pronunciation. That's the way I'm gonna say it, and that's final."

That is not a real quote, but it sort of could be, and that is why Les Miles is a national treasure. He showed up late, and left relatively early when everyone suddenly ran out of things to ask him all at once, and then the thing was over. The Hat remains a true clock management maverick in all aspects of his life.

We're hitting the road. Thanks for playing along on a shambolic week from SEC Media Days. Normal madness resumes Monday.