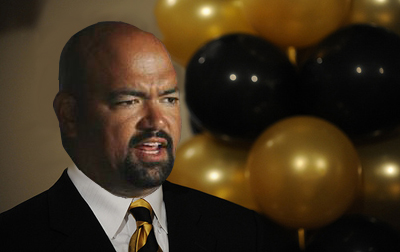 Ron Prince, former Kansas State head coach, held a protest SEC Media Days press conference at the Iron Horse Saloon on Friday in his capacity as the not-Vanderbilt Head Coach. Prince, who was not considered for the Vanderbilt job, answered questions asked by himself while sitting at a barstool and using a chicken drumstick as a mock microphone.

"What do you plan to bring to Vanderbilt football, Coach Prince?" asked Ron Prince of RonPrinceNews.com to Ron Prince.

His answer was calm and assured, and reminiscent of a coach ready to get back in the saddle after years pounding the pavement of the assistant's trail back to head coaching.

"I hope to bring real excitement to Vanderbilt. We can do some special things." He paused. "I would like some more ranch dressing, please."

Prince then ate the drumstick. No further questions were asked. He is not the head coach at Vanderbilt University. That is James Franklin, who is not Ron Prince the football coach or Ron Prince of RonPrinceNewz.net.