THINGS WE WILL NOT ASK AT SEC MEDIA DAYS

Share All sharing options for: THINGS WE WILL NOT ASK AT SEC MEDIA DAYS

Apologies for the delays, but writing up a whole day fishing with Mike Leach is not easy and takes some time and much editing. (Is discussing the advanced degrees fish do not hold relevant? Of course it is.) That will be up tomorrow morning, most likely while we are on the road to SEC Media Days, where we will most definitely not ask the following questions. (Yes, we saw about LSU getting a year probation. The NCAA likes 'em cooperative.) 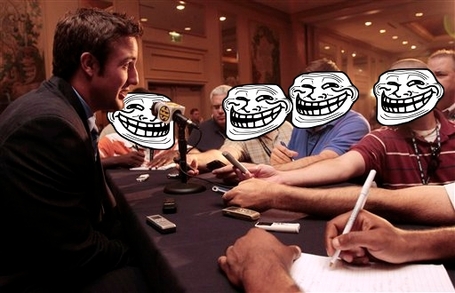 Illustrations by Luke, who also co-wrote this.

"How will you turn the tornado into a recruiting tactic?" <---SOMEONE WILL ACTUALLY ASK THIS WATCH

"Coach Saban, that was you laughing during the first fifteen minutes of Up, wasn't it?"

"Coach Saban — What exact date do you plan to start as Ohio State's head football coach?"

"Do you think Peter Dinklage has done a good job portraying the plight of your people on Game of Thrones?"

"Coach Muschamp, I'm going to hand you the mike and ask you to address the Monday Night Raw Mystery GM and tell you what you really think of them."

"Coach Muschamp, is this bothering you?" [waves red flag] [puts on matador's hat]

"Coach Muschamp — Are you aware that AD Jeremy Foley has named OC Charlie Weis coach-in-waiting? How do you think this will affect the locker room? Thanks for your time, Coach."

"Coach Muschamp, Coach Muschamp… Florida's yet to be investigated for any major NCAA violations under your tenure. What do you have against fitting in and are you worry about this alienating your peers?"

"You say you believe in a defense getting good penetration? How deep, and if so, before marriage?" ---Clay Travis

"Coach Phillips — Are you not not a member of the Illuminati?"

"Coach Phillips… Which is your preference — Calvin pissing on the UK logo or someone choking out the Wildcat."

"Coach Miles — A train leaves Baltimore 2 hours after another left the same station. The first train is traveling 18 mph slower than the second. Find the rate of each train, if the second train overtakes the first train in two and a half hours."

"Coach Miles… It's been a tough off-season. How have you coped with finding out, at long last, that the potty monster wasn't real?"

"Coach Miles — I have a box. In it is a button. If you push it, you get a million dollars. But somewhere, someone on the world will di—*leaps over table and pushes the button repeatedly*

"Do you plan to bring the same explosive attack you had at Maryland to Vanderbilt?"

"Coach Franklin — Your thoughts on turkey insemination. Thanks."

"Coach Franklin. I spoke with coach Ralph Friedgen this morning and he informed me he was very eager to get back onto the sidelines. Can I give you his resume?"

"Coach Petrino, do you feel your housemates in Slytherin were unfairly portrayed in the Harry Potter series?"

"Can you explain the basic shallow cross? Yes, I am giving you an out to spend the remaining twenty minutes of your session explaining a base play rather than talking to other humans about non-football substance."

"Coach Petrino, is Ryan Mallett the dankest qb ever? Don't worry about what that means. Just say yes."

"Coach Petrino, Coach Petrino… In this era of expansion and conference realignment, how does it feel to be the newest member of the Southeastern Conference? What does Arkansas bring to the conference it didn't previously have?"

"Coach Petrino, I am holding a jar of flies. Tasty, delicious flies. Do you want them in your mouth right now? I know you do--[jar flies out of hand on end of long, prehensile tongue]"

"Coach Petrino… Talk a little bit about your contributions to Stickum futures. If we throw the national debt to your world class receiving corps, will it drop?"

"Coach Dooley, Big or Rich? TRICK QUESTION! Both answers are wrong, and this is not a question."

"Coach Kiffin, How will Tennessee get through this tough time with sanctions on the horizon?"

"Coach Dooley, you're a lawyer. Along with that, comes certain responsibilities. America needs to know — Franklin, or Bash?"

"Coach Dooley — I know this has been hard for all of us, but really: you can call me Dad"

"Coach Dooley, can I have your mom's phone number? No reason."

"Coach Dooley, did Craig James kill five hookers when he was at SMU?"

"Coach Dooley, Coach Dooley - How many fingers am I holding up? How many days in a year? How many players are allowed on a football field at one time? How many Supreme Court Justice are there? Thanks for your time, Coach Dooley."

"Coach Dooley, if Tyler Bray was a Nazi war machine, would be be a V-2 because of his rocket arm, or because there's no telling where his bombs are going to land?"

"Coach Dooley, can you come shower with me? It's a matter of fixing my technique, not seduction."

"Coach Spurrier… 'On Golden Pond' Katherine Hepburn can get it. Amirite?"

"Coach Spurrier, best of three to the back wall of the ballroom. GO!" [fires tee shot from podium over terrified reporters' heads.]

"Coach Spurrier. On that last reporters question, for my notes' sake, how few fucks were given exactly?"

"Coach Spurrier, who's cheating in the SEC? Just point to them on this chart I'm holding. It won't leave this room, I swear."

"Coach Spurrier, is Stephen Garcia here? Because someone destroyed the minibar in my hotel room, and i'd like to blame it on him, not alcoholism."

"Coach Chizik, what do you think of the impending copyright infringement lawsuit former SMU coach Bobby Collins is going to file against you for stealing his life's script?"

"How do you replace an all-world chop blocker like Ryan Pugh? Also: do your tackling dummies have tear away ACLs or is that just the scout team?"

"Gene Chizik, do you agree with the assessment that after two years you still haven't found a quarterback to equal the on-field production and off-field charisma of Chris Todd?"

"Did you know you have something on your shoulder? Oh, that's your asterisk. Apologies."

"Coach Richt, if God provides, then why did he not give you any offensive linemen?"

"Coach Richt — I'd like to take this time to talk to you about an exciting opportunity. Our amazing condominiums are not timeshares in the traditional sense, and are part of the fastest growing, most lucrative bull markets in real estate history!"

"Do you look forward to not doing this next year?"

"Coach Mullen, my son is a talented, athletic bull of a quarterback. We're pretty well off so I'll start the bidding at 120 large. Do I hear 130?

"Dan Mullen. Does it bother you that people still call you Robin behind your back?"

"Coach Malzahn. Thanks for the 'cigarette' at the My Morning Jacket concert. Foster the People next weekend?

"Coach Mullen — Can you talk a little bit about losing the intellectual property lawsuit to the Woody Hayes estate? What euphemism will replace 'that school up north' and what has this ordeal taught you?"

"Coach Mullen, when do you think you'll get the Division One head coaching opportunity you've been waiting your whole career for?"

"A lot of people talk the talk but don't walk the walk so what I'm trying to ask you Coach Mullen — at which age did Clay Travis lose his virginity? 26? 30?"

"Houston Nutt, would you be averse to Ole Miss hiring 30 other head coaches to work side-by-side with you?"

"Coach Nutt. *Holds up laptop showing trailer of 'ANOTHER EARTH'* How worried are you about losing your job to you?"

"Coach Nutt, if you were on the bachelor, you'd propose to all ten women, wouldn't you?"