We've been negligent all week due to three different traveling work thingies, and apologize for not being more attentive. You get a DV today in between us working on--GULP--televisionish things. In the meantime, let's focus on the important things: pictures of Craig James cuddling with dudes.

FUSSY BABBITTS ALL AROUND.  We really don't think Craig James is some evil puppetmaster. Instead, ESPN is just a shitty bureaucracy like any other, filled with the kind of walking talentless shitsacks who will cut off talent's arm to protect an innocent stapler they will later present as a trophy to their superiors as proof of their efficiency. 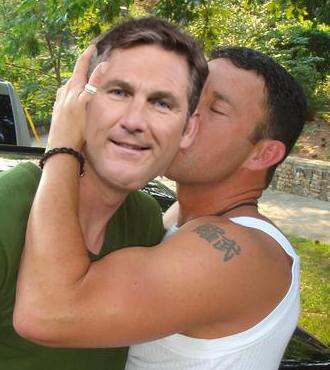 This is a fake photo and there's nothing wrong with it, right Mr-I'm-Not-Running-For-Senative?

That link has everything we really want to say that doesn't include profanities like "shit-gargling pig-rapist." This whole thing probably ends with Feldman writing for the same people, and enduring the inconvenience of a suspension, and all of us forgetting it, but in the meantime you have to endure a guy who is literally the most dedicated and knowledgeable reporter we know getting suspended because talentless management can't handle the implications of their own decisions. 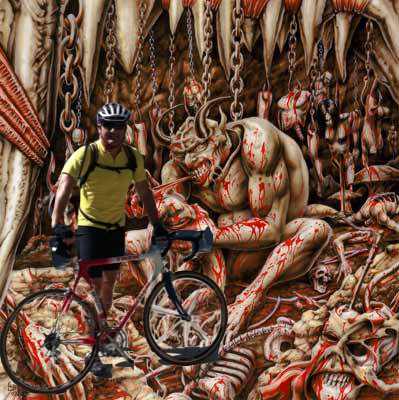 We don't even care about James anymore. At this point you just hope they just let Grantland flourish, put anyone who cares over there, and subdivide broadcast from print entirely and just let the people who care about writing and getting things right do their jobs. Everyone else on the broadcast side can just attempt to survive in whatever warped unreality they inhabit. (As for the sane ones there, Godspeed and God Bless. Your endurance and tolerance for other people's bullshit is unreal.)

It's fucking bullshit. That is all. (And PR people are largely worthless, and continue to be.)

HE'S A DILIGENT YOUNG MAN.  Bronco Busick, the West Virginia linebacker cut from the team last week for an armed robbery arrest, has been arrested for his second robbery in as many weeks. There will be a Fulmer Cupdate on this, but in the meantime let us commend him on his dedication to his craft, if not his technique.

The victim in the second case told police he was hit in the face and knocked down as he walked home from work June 23. This week, he identified Busick as the man who stole his iPhone and a wallet containing about $70.

Busick is the son of Big Bully Busick, the WWE wrestler. LIfe sometimes requires no embellishment.

BIEBS FEVER STRIKES US ALL. Have no shame. Passion is passion is passion, even if it involves Justin Bieber, Greg Scruggs. Between him, Charlie Strong's impenetrable man-musk, and Sunny Will Stein, America will fall in love with the blithe spirit of the Louisville Cardinals in exactly three seconds once football season starts.

BURN THIS HAT. No really, let's buy it and burn it immediately no now no seriously IT'S SCORCHING OUR EYES.

USEFUL THINGS TO KNOW: How to make Sauce Piquante Oberlin, another free bit of culinary brilliance from And The Valley Shook.