FULMER CUPDATE: SOMETIMES A POLICEMAN DOESN'T LIKE YOU AT ALL

Reggie Nelson's only peer, Boardmaster Brian, took valuable time off from his part-time job as the man who keeps Lexington Steele humble to provide us with this board.  Notes and clarifications follow. 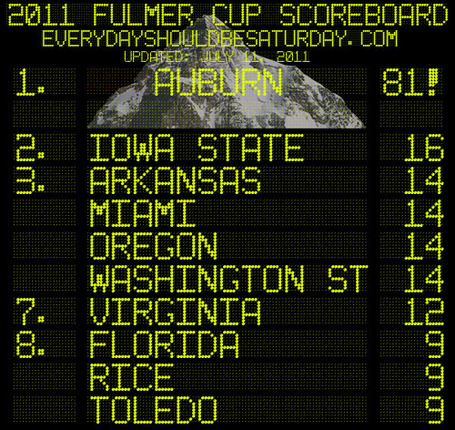 ARKANSAS COPS ARE BIG ON MANNERS.  Don't piss off cops, even when they're horribly wrong. By that we don't mean do whatever they say even if it violates your rights. We consulted noted civil rights expert and amateur herpetologist Darnell Dockett, and he said this is very, very bad and all too common among those who don't understand the basic principles of lawful and unlawful search and seizure. (He also has thoughts on dietary preferences of alligators. He is also making us like him, something we thought impossible after he attempted to rip Earnest Graham's leg off in 2001.)

So when you're pulled over for DUI, even if you turn down every test and go the reckless driving charges, be as polite as you can, and maybe the cop won't compound your DUI by searching the car and discovering K2, an incense illegal in Arkansas since last July that can be used as a really busted-ass marijuana substitute. He might also not cite you for driving left of the center line. Or failing to yield to an emergency vehicle. Or no proof of ownership. Or driving on a suspended/revoked driver's license.  Or no driver's license, actually.

That's seven different violations of the law on a single stop. Either Anthony Oden really pissed this Arkansas policeman off, or he made the traffic stop immediately after having his fifth Red Bull of the night and concluding a hellacious argument with his wife about the damn cable. (He'll give up Showtime over his dagnurn dead body, Lois, and that's final.) Be nice to policemen, because maybe they'll be nice to you, or maybe they'll hit you with their cars. Based on if you're in South Carolina or not, you might just never want to see a cop ever for any reason. (Pretend they're invisible! That's probably fun!)

We'll do a comprehensive emptying of the Fulmer Cup Processing Station tomorrow. Oh, and that Casey Pachall, Underoos Warrior Post? We'll talk about that tomorrow, too.