HAPPY NATIONAL CONVENIENCE DAY. On this, the least-considered and most impulsive of American days, we salute that which allows us to have the crap we do not need in any way but yet desperately crave. For instance, take a moment to thank the makers of Photoshop, Gimp, and other photo-altering tools. Without them, random requests from one stranger to another on the internet could never become glorious reality. (Click for big, because we're on plane WiFi back to ATL from OKC, and while marvelous and mind-blowing mid-air WiFi does NOT handle image downloads well.) 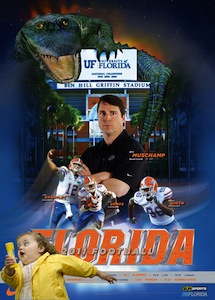 You should also thank Luke for adding the one thing Florida's ballstripping 2011 team poster was missing.

THE SCANDAL DOESN'T DEFINE WHO YOU ARE, BUT SPONGING OFF YOUR SONS FOR YOUR ADULT LIVING DOES. Cecil Newton, stay golden.

"I just want Cam to get out here, get on board with his team, do the right things on and off the field and the rest will take care of itself," Cecil Newton added. "He's played for so long for free that anything we make, man, is a blessing."

FATHER OF THE DECADE.  In case Cam doesn't pan out, btw, there's another paycheck in the pipeline for Cecil, 12 year old Caylin, a rising 12 year old prospect who Lane Kiffin has probably already offered three times.

TYLER GABBERT REALLY HATES HORSES AND HOT BROWNS. Either that or the overwhelming sight of Charlie Strong's person proved to be too intimidating a constant for Tyler Gabbert to tolerate, since he may have left Louisville after only one week on campus after transferring from MIzzou to seek more playing time. He also faced more competition for snaps at Louisville, so none of this really made any sense to begin with, but whatever happens Will Stein is just peachy with it, okay guys? [BEAMS] [THUMBS-UP!]

LUCKFLUFF. Andrew Luck is just hanging out with Peyton Manning in between semesters at idyllic Stanford and being rich and already famous and about to be drafted by the NFL. He's like Matt Leinart with fiber and nutrients and stuff!

DAMMIT WHERE IS THE RYAN MALLETT COVER WE WANT THE EMPEROR OF THE OZARKS. The alternate covers for NCAA 12 do not include The Family Arm, but photoshopping out all that money, weed, and ass proved to be too difficult even for EA's specialists. It's just all over the place no matter how you shoot the man.