Share All sharing options for: HELLO TALKING PHONE TELEVISION THIS IS MR. PATERNO 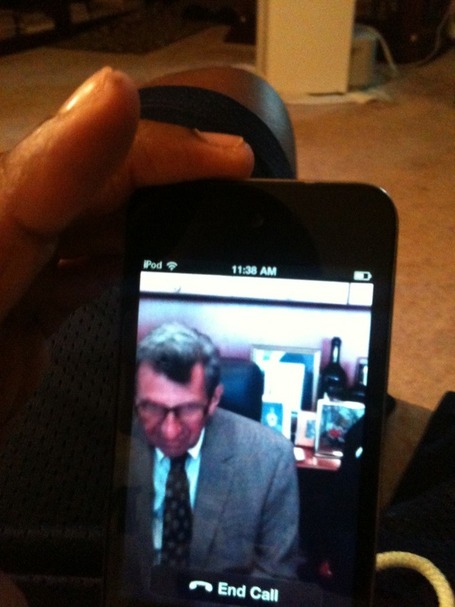 Admit it: a small part of you is terrified, just knowing that he's outlived whole countries, dynasties, fashions. fads, styles, and several species of once-endangered animals now extinct. You brush your teeth and floss daily, and avoid sitting for extended periods of time, and take the required vitamins, and you look at him and think, He's going to retire any day now, and life will proceed in the normal succession, the required "Sun Also Rises" motif. That's the way it's going to be. And yet he lives, and adopts new technologies, new methods of being, shedding the past's antiquities for the future's mysteries that will become the banalities of the present. He evolves.

You think, quietly, your inner mental voice going all sotto voce all of a sudden: he can't outlive me. He's frail. He's supposedly no longer in touch with things. Then you remember that scene in the final part of Star Wars: Episode Three, The Part That Really Makes No Sense where the Emperor feigns weakness and then sends YTDTDAIHTBIH out the window with fingerlightning out of nowhere? And you think, is JoePa just waiting to do that to the world? Then you think about how awful an actor Hayden Christiansen is, and how he still has more money than you, and that kind of sucks.

Then, as you do each year, you come to terms with JoePa being immortal, and you just sort of deal with it by thinking about how he'll pee on Jim Delany's grave one day, and that makes you smile, doesn't it? (Via.)