Share All sharing options for: THE ASIMOV CONFERENCE UNVEILS ITS NEW LOGO 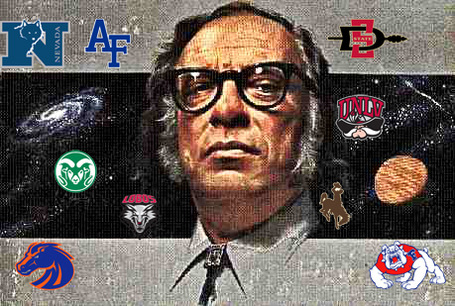 The Mountain West's new logo is out, and the reviews are...reviews.

Substitute the word "logo" for "Robot" and it's clear that this new logo violates all of the laws of robotics. We do appreciate the sci-fi branding, though, especially because it makes us think of shitty, non-Apple/IBM PCs our parents spent money on in the 1980s and through the 1980s. Tandy! It means your parents do know what a computer is, and do not love you enough to get a proper one.

We did cobble together a few visual cues into a single ideal usage for the MWC's new logo, though. First, Luke saw this, and naturally the logo belongs right on that computer's huge six-inch screen. Second, something about it seemed sort of Tyrelll Corporation-ish. And after the jump is what happens when you say, "Holly, can you put these two things together for us?" TIME TO DIE, CONFERENCE LOGOS. Chris Rainey and Rutger Hauer appreciate the raw computing power of the MWC PC 2K11, now capable of running a 32K TELEPHONE MODEM. (Luke's really gone off on this whole Asimov/MWC tangent, and you cannot stop him.)