Boardmaster Brian, whose genitals are so large Reggie Nelson refers to them as "comparable," brings us a very special E3 Apple Tribute board this week. The Fulmer Cup! Now updating automatically without help from iOrson! It still doesn't run Flash, and if you would like it to you can go fuck yourselves with a Zune, peasant. Updates and explanations of a sort follow: 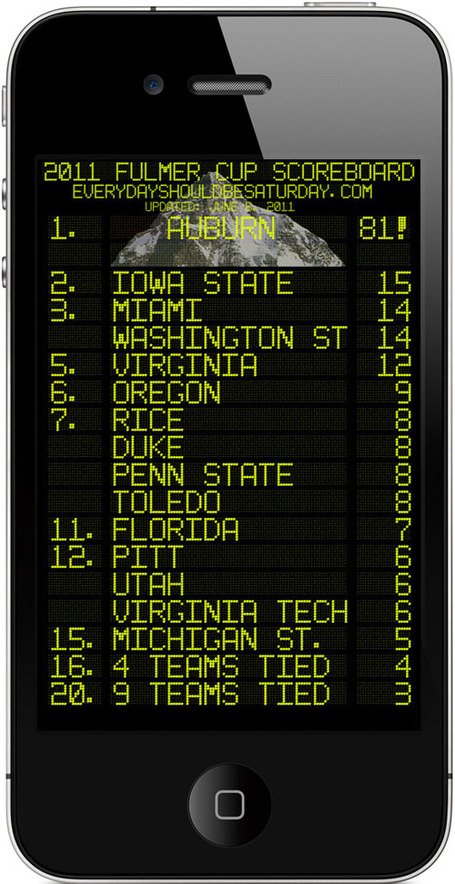 AUBURN IS THE KANYE OF THIS BITCH. Just look at them out there. They're probably in the Kanye stage of things at this point in their Fulmer Cup career: so far ahead of the competition that the boredom and distraction has set in with a fierceness. They're looking at acting. They're buying antique fishtanks and avant-garde art by the truckful. They're running the last laps of the race backward and seeing how many Swedish models they can bed in a night. Oh, and the fashion line is already on the way.

It will be called cHiZiKK for MENZ, and it will push the boundaries of fashion like nothing we've ever seen in South Alabama. 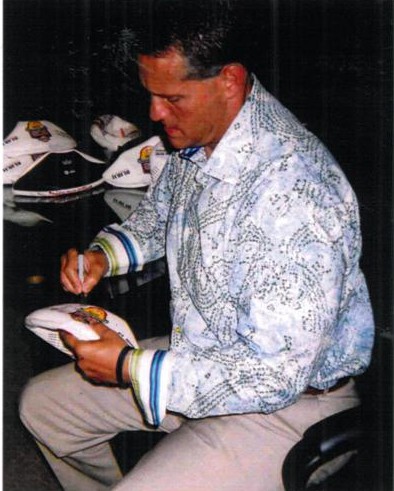 It's mostly inspired by a series of nightmares Gene Chizik's designer had after smoking too much nutmeg and watching a series of vintage Bollywood movies for 36 hours straight. You might say bedazzling was best left to PTA mothers with severe weight issues and the genitals of insane women, but Gene Chizik will bring it to the forefront of men's fashion if it takes everything he's got. The flipped collars hint at exactly what you think you see there: THE ENTIRE SHIRT IS REVERSIBLE. The rhinestones exfoliate as you walk. Warning: wearing this shirt striped side out may cause excessive nipple bleeding. Do not be alarmed: That means it's working. (Via.)

TOLEDO: We neglected the second of Toledo's assault incidents in the last Cupdate, so Isaiah Ballard's felonious assault charge did not make the tally. Pity, too: a three point felony charge gets a point bonus for Ballard's thorough and professional approach to random street fights. Most guys just slap each other around and yell "WHAT! WHAT!" loudly, but Ballard broke the other guy's nose, and for that level of dedication to the cause we hand out bonus points. Four more points for Toledo, a hard charger for the MAC points championship down the stretch.

OREGON: You down with MIP? Oregon is, and in stellar fashion. LOKO FOR DAT LOKO:

Coleman, 18, was walking near campus with a can of the malt liquor Four Loko when he was spotted by officers at the intersection of 16th & Patterson on Saturday at about 11:15 p.m. A report of the incident said the can appeared to be unopened, an EPD spokeswoman said.

And he didn't even get to taste the nectar that set a thousand trailers on fire. The presence of 4LOKO in this case gets him a bonus point for the two misdemeanor charges, and so does leading police on what is described as "a lengthy chase." We like championship effort in every facet of a program's being, and it's good to see Oregon hasn't let up from 2010's Pac-12 title-winning intensity. Three points for the Ducks.

SYRACUSE: One measly point for underage drinking and hanging out with Pitt players. This may not be his fault, as the air around people from PIttsburgh has a base alcohol level high enough to elevate your BAC into "legally drunk" territory. (Breathing shouldn't result in underage possession, but in Pittsburgh and the entire state of Wisconsin it does.) One point for Syracuse.