Share All sharing options for: ALABAMA CAN NOW CLAIM THE NETFLIX NATIONAL CHAMPIONSHIP

This helpful infographic from the Lincoln Journal-Star covers a number of fascinating elements of Nebraska's move to the Big Ten. Why look at those population bubbles! And the number of Starbucks per town, indicating the general presence of a robust mass-market consumer class in each city! And OMG THE NETFLIX CHOICES ARE GOING TO KILL YOU DEAD:


Ann Arbor: Dead Poets Society. Probably popular for the scene where Rich Rodriguez, convinced of the unending pain of living, hangs himself while wearing laurels made for him by Greg Robinson. The "laurels" are actually poorly cut construction paper held together with mucilage, and not enough of it because Gerg got hungry.

Bloomington: My Fair Lady. Really, it's just a despondent Bill Lynch renting this over and over again while yelling "THE PAIN IN RAIN PALLS MAINLY IN THE FAIN" and weeping in his living room.

Iowa City: Trailer Park Boys. Warning or life blueprint? Only the residents of Iowa City know the answer in their heart of hearts, and they're not telling. (Life blueprint.)

Twin Cities: The Mighty Ducks. "We're Ducks, and we fly together, and someday we'll beat Ohio State like we did under Glen Mason OH GOD DID THAT EVER REALLY HAPPEN SO NUMB SOMEONE HELP."

Evanston: Every LIttle Step. documentary about the revival production of A Chorus Line. No elaboration needed or desired.

State College: Battlestar Galactica. Favored for its realistic portrayal of the future when Joe Paterno leads the human race to its new home through alien peril and strange galaxies.

Madison: Twin Peaks. Makes total sense after you've consumed 28 beers and a handle of rotgut brandy on a Tuesday evening.

Columbus: The OH in Ohio. Columbus, OH is evidently one of those places that doesn't realize the internet has free pornography.

Lest you think we're being too cruel to one conference, the SEC's cities are after the jump, and they are equally heinous and telling of the inner workings of each town's collective psyche.

Knoxville: Persuasion, but the Masterpiece Theater edition only, please. (They fancy.)

Gainesville: Unforgettable, Philadelphia, and Land of the Lost. We're sure the last one is purely for the kids [loud, prolonged bong rip].

Athens: North and South, the Complete Mini-series. We don't even know if there's anything that can be added to this save a reminder that a key plot point is Kirstie Alley boning a slave, and that this is wildly popular on the rental market in Athens, GA. GO DAWGS.

Oxford: Fireball, Top Gun, A Clockwork Orange. A fondness for movies involving repressed homosexuality and costume rape (LSU is like "Did someone say costume rape? We can hear you we're right over here.") Solid traditional picks on the last two, as classic as vomiting up 9 Bud Lights into a chafing dish in a tent.

Starkville: The Lazarus Project. "Seems relevant to my interests as a fan of the Mississippi State football program."

Auburn: Midnight in the Garden of Good and Evil. Get your own mossy regional dysfunction, Tiger Town.

Fayetteville/Little Rock: War Eagle, Arkansas. "We won in Fayetteville, PAWWWWWWWLLLL, so we get to rename the capital." Has Brian Dennehy, the universal marker of made-for-television movie quality. By title is already under investigation by the NCAA. Also: The Men Who Stare At Goats, an instructional video for nightlife in much of Arkansas.

Baton Rouge: City of God, Monster's Ball, and There Will Be Blood. All listed under comedies. Baton Rouge would take the title of Mythical SEC Netflix National Championship, but we think you know who really has that. 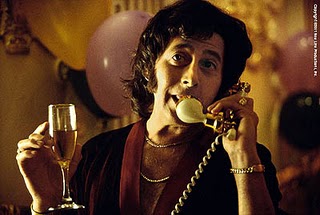 "Hello, Tuscaloosa? Congratulations on your Netflix Championship! I'll be over in five minutes in my gold speedo."