This week's update was done by Brian, the boardmaster whose task was made easy this week by the college football cosmos only coughing up one incident of documented misbehavior. That's good, because dragging around a 845 ton penis is hell on your back. 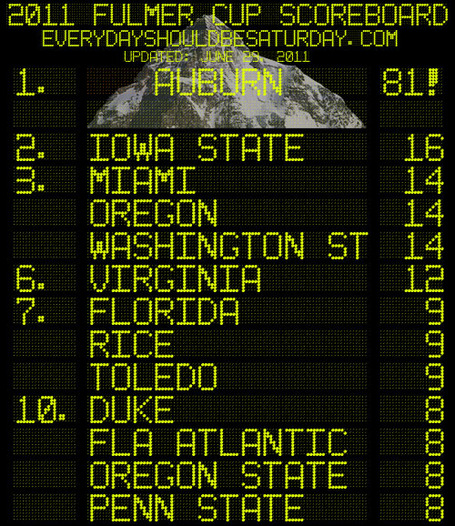 AUBURN IS TOTALLY PHONING IT IN AT THIS POINT. Just sitting up there with their feet out the window, so to speak. We don't know if there's a greater pleasure while driving than to pop a bare foot out of the window, stick shift be damned.* The wind on the soles of your feet, the pleasure of pissing off morons who would be offended by the sight of a bare foot out of a window, and the microscopic but still real potential of kicking the head off a deer before it hits your car? Just a few of the obvious pros for doing it. It's even better if your foot is dirty from wearing flip-flops. It's like a Marshall Stack for your gigantic rocking Flying-V guitar wailing out note after note of aintgiveafuck.

That's Auburn right now, and the rest of the universe is fighting for second place. WOO AIN'T THAT ALWAYS TRUE PAWWWWWLLL. No, no it is not.

*Don't ever do this.

TRON RIDES A MAGICAL LIGHT CYCLE INTO THE ARMS OF THE HUNTINGTON PD. The only school making any noise this week is Marshall, whose running back Tron Martinez was arrested for disorderly conduct and obstruction. The bold running back from a 1983 Future has now had his second brush with the law, though by comparison this one is piddling business. Martinez at one point in 2009 the former Old Dominion running back faced eleven felony charges, a sum that was eventually bid down to a single misdemeanor. (Applaud, attorneys of the world. Applaud, damn you!)

The misdemeanor charges are worth a point each, but if the past history isn't worthy of a bonus point for being a repeat offender, then you will agree with us that the name "Tron" is totally worth a bonus point all by itself. [light cycle noise] We wouldn't worry about him, though: his legal defense strategy seems to be strong.