WHY ISN'T LSU RECEIVING THE SAME SCRUTINY AS OREGON? Well, probably because the Tigers paid less money for Willie Lyles' custom aged recruiting information, and because someone's cousin at LSU is fixing the whole thing for them. This is all relevant only because LSUFreek made this from the Adult Swim video for Mastodon's "Deathbound," and we love it too much not to shoehorn it into your day for no reason other than the thing itself.

It could also be a taunt-y preview of the LSU/Oregon opener in Dallas, and that's probably the most logical way to look at things here. This muppet at :40 in the video is our new bicycle: 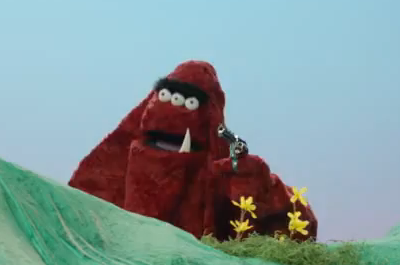 THERE SHOULD BE A SLIDING SCALE. For instance, we would like futures on the hot seat, i.e. how angry fans will be if Will Muschamp's first Florida team comes out and plays 52 pick-up against the Tennessee Volunteers in the third week of the season at home, or how enraged Arkansas fans will be if the Hogs bellyflop horrendously against Alabama in week four. Oh, and futures purchases on Richt's hotseatedness if Georgia somehow loses to Boise in the Dome in week one are not available because the numbers are incalculable in this case.

YOU...YEAH, IT HELPS TO CHEAT. You don't necessarily need to cheat to win, and there's no correlation between the championship teams on a point-to-point basis and infractions, and let's not go overboard with a quick check of infractions versus championships, but....yeah, you need to cheat to win titles and championships in college athletics. :( On a relevant note, this chyron exists, and will be used unfairly for generations of internet discussions to come.

ON THAT TOPIC. The SEC is proposing, among other recruiting changes, a return of unlimited text messaging. Houston Nutt will ruin this by selling his phone number to spammers for some extra scratch on the side, and we would place sums of entire dollars on the line in a wager on this happening and ruining it for everyone.

EVERYTHING IN HERE IS SAD DON'T READ IT. Ereck Plancher's mother testified, and shit, it's awful.

NOT THAT ALL VIOLATIONS ARE EQUAL.  $149 to LA one-way? Holy shit, you can comment on the minor corruption and benefit of getting free airfare, and get all huffy about it. You must, however, admit that while funneling benefits through a Parks and Rec team is exquisitely stupid, these folks know how to find the best deals on airfare. We like our corruption thrifty-like in Georgia.

HE LOOKS FAMILIAR. Nebraska plays Washington yet again this season, and look! That Chris Polk guy is back! Can't wait to see him again! Bo Pelini has a small stroke each time his name is said, but frankly it may be doing him some good since slow, small leaks in his circulatory system may actually be prolonging his life at this point. #worriedaboutBoPelinisbrain

PATTI LABELLE LIKES TO WASTE MONEY AND THE CAREERS OF ARMY FOOTBALL PLAYERS. She's filing a counter-suit in the case of former Army football player and cadet Richard King. King has already filed suit against LaBelle after a scuffle with LaBelle's bodyguards at Bush Airport in Houston ended with King getting smacked in to a concrete pillar, the Houston PD alerting West Point, and with King being placed into an 18 month mentorship program and possibly a spin through active duty, too. Michael McDonald just wishes you'd call, Patti, if you want to talk about it or something. He'll just be over here moping around on a California beach with his hands glued in his pockets if you need him.

SCRAPPLE. The fear that creeps into Furious Pete's eyes around the minute mark should indicate that eating an entire jar of Nutella is a bad idea no matter how delicious it sounds. Next level drinking music. Ladies pretty much assume climbers are hot, and that golfers are not, but what about XTREEM ALPINE GOLFERS?