PROBABLY STILL LEAVES A BETTER AFTERTASTE THAN BILL LYNCH'S PISSCREEK INDIA FAIL ALE.  Sweetwater Brewery is a pretty chill place. You can go to the brewery and earn free beer by helping them box up new brew, they open the place on Fridays and offer a nice boozy spread for a reasonable price, and they happen to make quality beer in the hometown of EDSBS, so yay you, Sweetwater.

They also know how to pander, and pander hard, to their hometown's collective sensibilities. 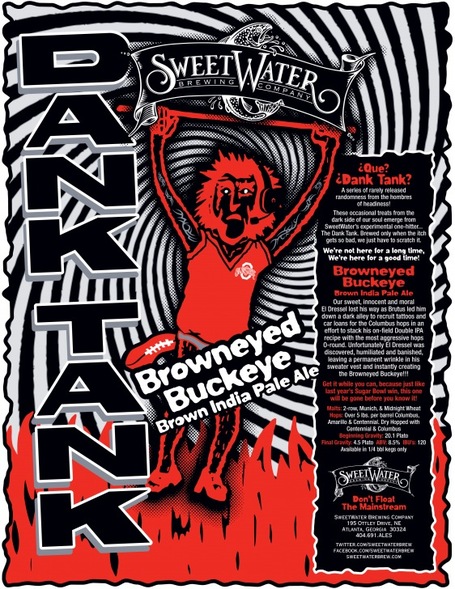 We haven't tried it yet, but brown India Pale Ale is in very limited supply like most of Sweetwater's Dank Tank brews, and because, well...

Get it while you can, because just like last year’s Sugar Bowl win, this one will be gone before you know it!

Because of that. We love you, Sweetwater, right down to your tasteless beer names. (HT: SBN ATL, Fear the Hat.)

WE'RE WATCHING YOU, CHEESE TOAST. Russell Wilson will announce his transfer destination today and will give his first interview to College Football Live, something they would very much like you to remember. War Dog Eagle is watching every goddamn move you make, Cheese Toast. Don't freelance. That's for amateurs, and you're not an amateur, are you?

He's going to Auburn, and we will believe this until we see him don a Badgers cap and shotgun a Schlitz on air. Is Russell Wilson, a transfer qb from NC State, really worth the hubbub of a solo interview? We counter your question with a question: is it June 27th? Why yes, and yes.

THEY CALL HIM THE WOLF, ESQ. Oregon has hired Mike Glazier to look after their interests in any possible NCAA investigation of Oregon's dealings with aged information specialist Willie Lyles. He was an NCAA investigator at the same time as SEC Commissioner Mike Slive. They knew each other back in the shit, man. We want to see the school that actually pulls out big guns when the NCAA comes to visit, and we all know who that would be if it happened.

NOW WE RECRUIT ONLY PLAYERS FROM BORING TOWNS. Georgia Tech's Fred Holton is a DB who can crank out a 330 pound power clean at 210 pounds, something he credits being from boring-ass Thomasville for in this AJC article about his must

Thus do we explain the term "country-strong."

A REMINDER: ESPN has explicit rules about employees and political advocacy, meaning that if the rules apply to Craig James he will not be on the air this fall. Democracy's potential shame is your benefit, but let's hope for the optimal outcome of financial loss for him in terms of personal money invested in the campaign, a season off the air, and defeat at the polls combined with personal scandal. ("Craig James found to be in illicit relationship with concrete pole: 'SHE ALL I EVER LOVED.'" )

AWWWWWW THAT'S FUNNY AND SAD AND NO STILL FUNNY. Discount gear, y'all!