Share All sharing options for: CRAIG JAMES FOR SENATIVE

All hate is unilateral and strictly bipartisan, because if our country can unite under one banner, it's in despising Craig James. 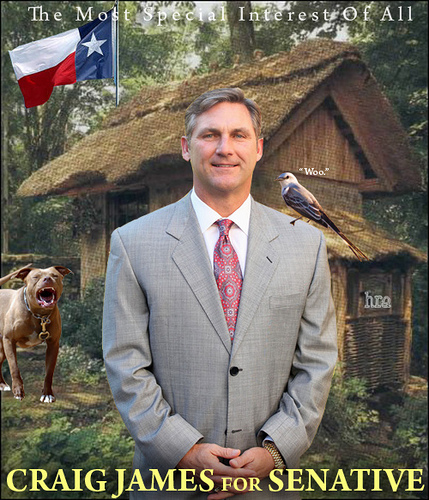 Hi Americas. I'm Craig James. You may know me from my works on ESPN, where I still work while not running for Senative. While not offiscally running for the senatives yet, I do still do works for ESPN, and this is not a constrict of interests. I believe in economic freedom and dogs and the touchdowns. Woo. Woo.

I'm a businessmant. A football playert. A God-fearing mant. A family mant who came from family, unlike my urponnent in the futures where I may or may not have urponnent.. He has no family. He has not mother. He may have just appeared here like a package delivered from wherever. You can't trust that.

I'm on also television which you can trust because that doesn't happen for bad people. The TV police don't allow that.

I believe we are defined by our value---

[A HORSE IS THROWN THROUGH THE WALL.] 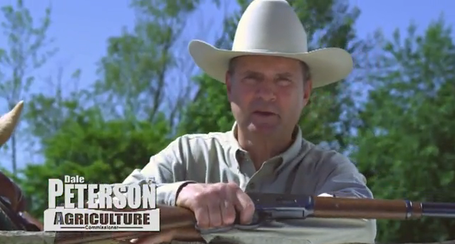 What kinda bullshit ad is this, Craig James? You call yourself a politician? THERE'S NOT EVEN A DAMN GUN ANYWHERE IN THE AD? You afraid of America's original remote control?

/blows wart off foot with rifle

/blows top off motor oil can

I think you are. It's like you don't give a rip about illegal immigration, either. You see that horse? No papers, horse? What's that you say, horse? Or shall I say, COMO SE DICE BUSTED, PEDRO CABALLO?

Betty Lou! Steaks au cheval tonight! Lean protein straight off the hoof. That horse was my second cousin, but I believe in family farming, Craig James. You got a picture of yourself on a horse, but until you've eaten and killed what's yours by blood, voters won't take you seriously. Also, I do support the eating of illegal immigrants. They feed off us, well, we do the same to them.

Dale Peterson: Oh, and you're showin' people football footage. I see that Super Bowl footage in there. Most a these people don't remember the stumpbreaking you took in that Super Bowl. One yard on five carries? If you pass legislation and shit at that same rate, we'll have one turd come out of each end every six years. Your son had better receiving numbers than that at Texas Tech, and he catches balls like a fat gay virgin at a Miami circuit party: rarely, and not without making way too much noise before, during, and after.

Craig James: Hey you leave my son outta affairs he is a child who is twernty five and can't defend hisself--

Dale Peterson: What have you been, Craig James? You know what I've been, Craig James? I've been a real rancher, a politician, a banker*,  a saleman, an amateur solo undertaker, a Mormon, a Jew, a pilot of vintage balloons, a marksman, a recovering manslaughter victim, a Marine, a father, a mother, an adult contemporary sensation, ameat-cutter--

Craig James: What kind of meats I only know the beefs.

Dale Peterson: All of it! Bear, human, dog. giant cicada, I cut it all because it was my job, and I loved it every second of it. THEN THE GOVERNMENT CAME AND TOLD ME I COULDN'T CUT HUMAN MEAT ANYMORE. I'm not hunting it, I'm just doin' my job! AHHHHHH

Dale Peterson: OH YOU SHUT YOUR MOUTH BEFORE I SHOOT YOU IN THE FACE YOU WOO-HOOIN' PANSY. It's my second amendment right to swang this thing around. I'm talking about my gun, in case you wondered, but they couldn't keep this from dragging down the side of my Wranglers, either. Eyes up here, pretty boy! Stare but beware, because once it's outta the snare it don't care where, sugar bear, if you know what I mean. FREEDOM!

Dale Peterson: Hell, you're just a talkin' Speak and Spell aren't you. I can put anything on this card and you'll read it, won't you?

Dale Peterson: Shit, you're ten times stupider than I thought.

Dale Peterson: I forgot. This ain't a real job like Ag Commissioner of Alabama. You want to be a Senator. You'll do just fine, won't you?