A SHOT BY SHOT BREAKDOWN OF LES MILES CINEMATIC MASTERPIECE

Share All sharing options for: A SHOT BY SHOT BREAKDOWN OF LES MILES CINEMATIC MASTERPIECE

For reference watch here, in case you've been under a rock. 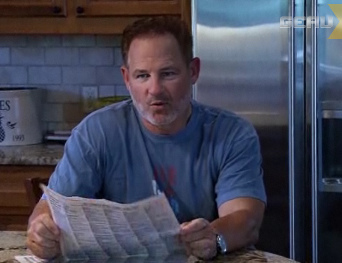 This is all Les Miles has done this offseason: read the sports page. It's not even today's sports page. It's one from June 14th, 1992, and it is the only sports page Les Miles ever reads because it contains a moving story about an armadillo who showed a young baseball player how to appreciate the things he had, and to not sweat the things he might never achieve. That armadillo? His name was Miguel Indurain, and he won the Tour de France that year. The baseball player? His name was Les Miles, ladies and gentlemen. This may not be a sports page at all, and Les Miles may be hallucinating.

That's not gray in his beard. It is powdered sugar from the huge powdered beignet he uses as a pillow. It is freshly baked  fried and delivered to the Miles residence each evening, and eaten for breakfast every morning by Miles himself. Despite eating ten pounds of pastry each morning Miles maintains a reasonably fit figure, and you should hate him for his natural metabolic luck, fatty fatty boombaladdy. 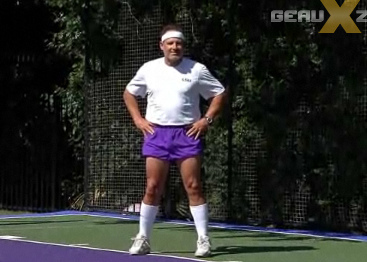 You can do like thousands of calf lifts at the gym. Your legs will never sprout the same man-taloupes Miles has for leg muscles, but most especially in the calves where Miles holds up a pair of white tube socks like a powerlifter on holiday. Have a nice day, you say? Oh, with those shorts we already have, sailor. Please note that the headband, as ridiculous as it looks on a fifty-plus man in short shorts, still looks better than LeBron James' (though like James, it does disappear about 70% of the way into this video.) 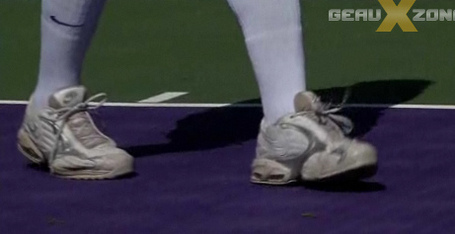 Oh, a canny choice by the wardrobe people here. The Nikes with the visible window of supportive transparent plastic air cushion, the most unnecessary of secondary shoe features. At least 'Roos' pockets could tote around spare change; all the Nike bubble-window gave us was the fleeting thrill of driving a pen through the rubber in the middle of class and discovering that the difference between a deflated shoe and a fully inflated support bubble was shockingly small. BTW, one day when we're rich and famous we're just going to wear nothing but Hayden Fry Ponys, Walter Payton 'Roos, and Freddie Mercury Adidas Sambas as footwear.*

*Don't actually try the Freddie if your feet are bigger than a size nine in men's. We tried on a pair. Our feet looked like enormous gay steam shovels, and we're only in them 12s. 14s and up must look like lace-up skis. 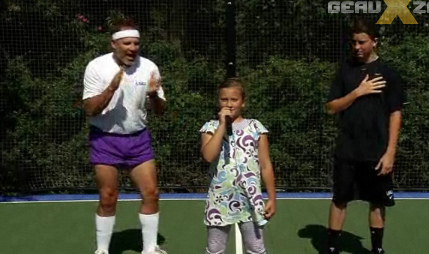 Everyone looks extremely uncomfortable with this arrangement except for Miles, who you'll notice claps at home the way he does on the field: hands straight, eyes filled with glee, and with a silver turnkey rotating slowing in the middle of his back. His daughter is torn between her obligation to sing the anthem, and her burning desire to put a foot in the ass of the audience and let rip with her pitch-perfect rendition of the Nicki Minaj verse from "Monster." Miles the Younger on the right knows her dreams, and is hoping she'll bust a rhyme and shock the world. That's what would make her happy. When she acquiesces to her father's wishes, a small part of him dies as the anthem sounds in the air. 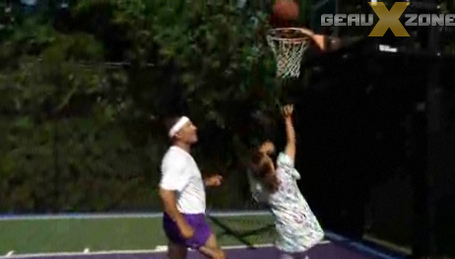 This is Les Miles clearly letting his child win. You should never let children win anything at any age. It teaches them weakness. Our dad never let us win at anything, and to be honest he still beats us at most things. We're not resentful, though. We're going to win the game called "Retirement Home Bingo." Guess what, dad? It spells out "Slightly Damp Bedsheet Acres!" Bingo! We win something for once, dad! 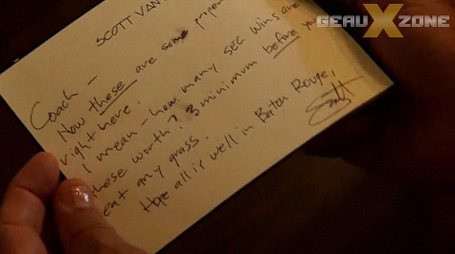 Scott Van Pelt as the penmanship of an Eagle Scout. We are quite serious: that is some beautiful masculine freehand writing. We write like Marcel Proust scribbling with piece of charcoal on a Japanese sex hotel's vibrating bed during an earthquake. Nice work, sir. 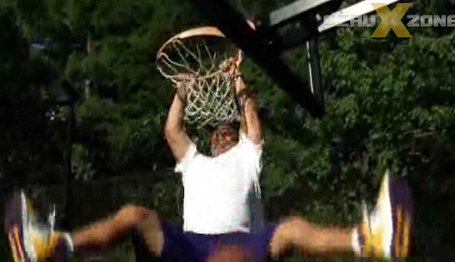 We will make it our mission to not only go to Baton Rouge this fall, but also to get someone drunk enough to get this image of Miles dunking a basketball tattooed on their body for all eternity. We also would bet a hundred dollars cash money that Les Miles tore something in his groin doing this, and would double the bet to include Miles telling his doctor "I think I popped a cockspring, doc."  That brown image in the crotchular area is not a basketball descending from the dunk, but instead one of Miles cannon-sized testicles escaping his Bike shorts. 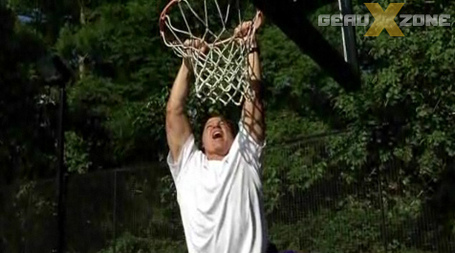 LSU Sports Information representative Michael Bonnette announced today that Les Miles will coach the opening games of the 2011 season while hanging on to a basketball goal he has been stuck to for three months.

"Coach Miles will do the same job he has always done leading the LSU Tigers, and continue our tradition of excellence. He is also stuck to a basketball goal, and has been since late June."

Miles, currently suspended three feet above the ground and hanging to a rim, says he'll let go of the rim when he feels like it.