SO YOU'RE GOING TO LET ME FIRE THE GUN, RIGHT?  They are having a conversation, and though we do not know what they are discussing, Brent Hinds of Mastodon and Dana Holgorsen are surely saying something like this. 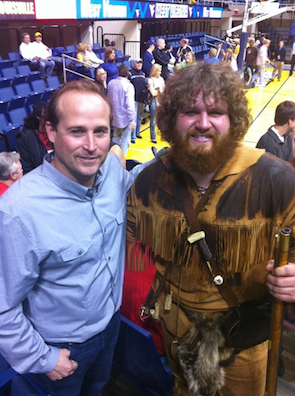 "Whaddya mean it doesn't pack real ammo? Well, we have to fix that, don't we? Hell, anything will do. See, if I just cram some spare change and a pocket full of lint in here, and some black powder..."

"Wait, what the fuck are you doing with black powder--"

"For virility. And see, you just light it with this, and---"

SO OREGON FORCES US TO CHOOSE BETWEEN OUR TWO HANDMAIDENS. If Oregon did pay Willie Lyles $25,000 for outdated recruiting materials, then they were badly hoodwinked, didn't notice it, and wrote the check anyway. This is important for prospective scouts looking to cut and paste Rivals.com profiles into Word docs and then sell them for thousands of dollars: Chip Kelly is willing to listen to your offer, hear that it is total bullshit, and then write a check anyway.

The other option is that Lyles was paid for materials that served as cover for payment to recruits themselves or to Lyles to push them towards Oregon using some form of coercion or bribery. As much as we love the delicious swirl of both incompetence and corruption, it really can't be both in this case. Lyles' materials are so devoid of value and poorly done that they make the two categories mutually exclusive in this case. We vote for incompetence, but only because it is the more common one, and what's $25K to a program with whooshy Star Trek doors and tropical hardwood hot tubs in the locker room. (Fun photo game: "Oregon locker room or Phil Knight's Orgy Den?")

ON THE SUBJECT OF SKETCHY BUT LICIT THINGS. Licit is an underused word without its prefix, much like "whelmed," a word we're determined to work into the vernacular this year. We're more than whelmed with the explanation behind Auburn's hostesses, whose work and compensation places them right at the plausible limit of compensated part time student work. Now, is it sketchy? Only as sketchy as having a compensated attractive group of young women (and a few dudes, yes) paid to show football recruits around campus can be, i.e. dodgy as hell but still by the letter of the law permitted. (At least as long as they don't visit schools, Lane Kiffin.)

NOW THAT'S A ZESTY DUI.  There are bad moments in life, and then there are moments when you wonder if the script has been taken over mid-rewrite by JP Dunleavy. This is one of those.

University of Louisville cornerback Darius Ashley was arrested early Saturday morning on his second drunken-driving charge in seven months after he rear-ended a police cruiser at a stoplight.Ashley had a blood-alcohol level of .186 — more than twice the legal limit — according to the police citation, which also stated that Ashley said he consumed four beers at 4th Street Live!

When "four beers" seems like the reasonable response to "how much have you had to drink tonight, son?", you are so deeply trashed that the actual sum is at least twice if not three times that number, but mind you that's only been asked after you've just rear-ended a cop at a stoplight. Ashley's .186 doesn't quite measure up to the .192 he registered when arrested passed out at a drive-through last year, but it's still beyond hammered and more than enough to get him the uncoveted three point DUI charge. Add in a point for repeat offender and the obligatory bonus point for nailing a police cruiser, and we've got a robust five point charge for Louisville in the Fulmer Cup. Does Louisville have bike lanes? Ask Mr. Ashley, as he is about to discover the answer to this question on a very personal level.

IT'S HIGH POINT SOLUTIONS STADIUM.  YOU GOTTA PROBLEM WIT DAT? Rutgers stadium will be named "High Point Solutions Stadium," and we congratulate Rutgers for swindling another company out of money in exchange for an arena name everyone hates and forgets after a year.

IOWA AND RHABDO JOKES ARE NOW MARRIED AND HAVING BABIES AND KISSING AND EWWW GROSS. No, this didn't happen, but my oh my it could have.

ERRATA, ETC, ENCARTA, EX CATHEDRA, XTC, XSCAPE: NFL posters in the 80s were gloriously racist. We haven't seen a single episode of Thrones yet, so this is relevant to our experience. (Yes, we will watch it, because HOLY SHIT THEY POURED MOLTEN METAL OVER THAT DUDE'S HEAD.) We're going to do this, so if you are going to be in the area near MIDDLE OF NOWHERE, OKLAHOMA that weekend, by all means stop by and say hello. Hey, Clay, you know, we're just saying, if you're talking about trend traffic son, you might want to look after the jump and bow to the Khal Dorko of the blogosphere and his consistent barbarism. 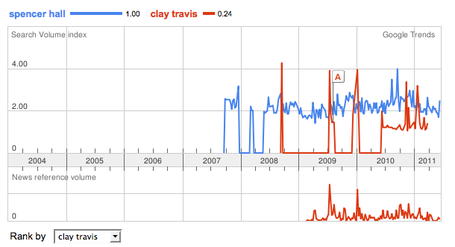 We both bow down to mighty MGoBlog, however. 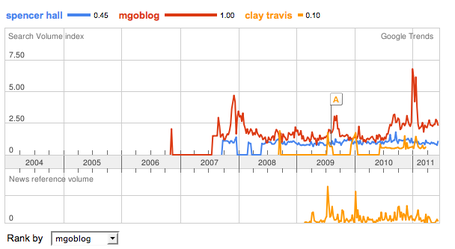 And to put it all in perspective, Cake just comes along and puts us all in our fuckin' place. 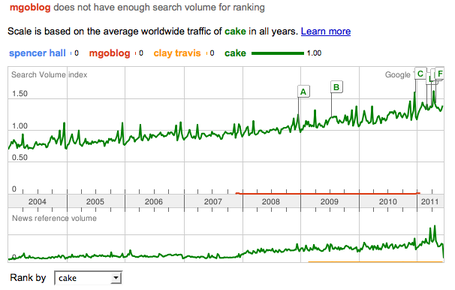 ALL HAIL CAKE. By the Reilly standard, Cake should be getting paid like a trillion dollars a year.