The intro where we talk about how Boardmaster Brian is as hung as Reggie Nelson, often using extremely cartoonish metaphors. Descriptions of scores often follow, usually explaining how points are alotted. You are encouraged to read the awards, and to note that no one, not ever, is ever, ever going to catch Auburn in this. 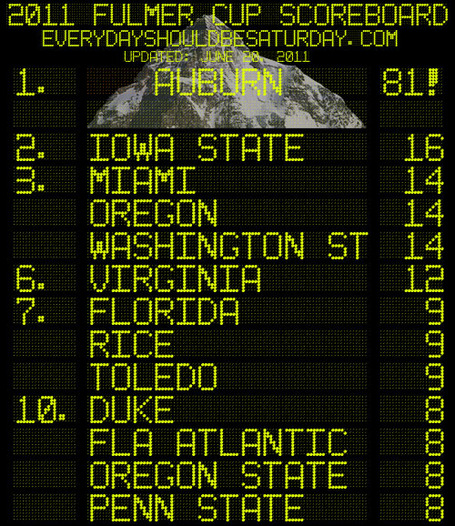 UNIVERSITY OF NEW MEXICO. Pants are such a force for good in this world. They cover pale legs that would otherwise blind passersby; they keep you warm when you live in a godforsaken place where you have to wear then in June. By suffocating you in the heat, they provide nature's sweetest PG-rated relief when they happily agree to their removal. God, taking your pants off when you've just walked through 95 degree heat is better than heroin. They should make movies where people rob pants stores and steal heaters from senior citizens in the dead of winter just to get the rush of removing slacks from sweaty legs. Ask Ewan McGregor to star; as the international stage's foremost pantsless thespian, he's only a natural fit.

It is a shame, then, that New Mexico's Deshon Marman and the staff at US Airways would turn such a net happiness generator into a negative. US Airways staff pointed out that Marman's pants were in fact lagging off his ass, invoked a rule written to forbid just this kind of underwear modeling from happening, and then OH DID A FRACAS ENSUE. Marman was booted off the flight, charged with trespassing, battery, and resisting arrest, and arrested before appearing before a judge and posting $11,000 bail to return to New Mexico. He then apologized.

Our opinions on wearing your pants hanging off your ass are exactly what you think a 79 year old Inuit female's would be*. We believe they present an unwise frostbite risk, mortify the eyes of the women, and limit your agility in clubbing the fruit of the sea at prime holes in the ice. Our opinions as boardmaster are simpler: one point for each misdemeanor, one point of bonus for everyone being so fucking stupid in this case that a pair of saggy drawers ended up with a judge wasting time on the case, and a pox on all of you. (With some leniency for Marman, who has already apologized for the incident.)

Four points to the University of New Mexico Lobos.

*Is not a 79 year old Inuit female, but don't tell that to the United States census.

SOUTH CAROLINA GOT COCKY WHEN IT CAME TO DUI CHECKPOINTS HAHAHAH [JUMPS INTO PIT OF SNAKES TO ATONE FOR PUN] Devonte Holloman got tagged for a DUI in front of Williams-Brice Stadium, an act that gets a bonus point for an already dumb Fulmer Cup infraction to bring the total to three points for the Gamecocks. Holloway didn't drive into the middle of a team meeting through a wall drunk, however, something that just totally crossed Stephen Garcia's mind but will not happen because he's being a good boy BAD STEPHEN STOP WHISPERING THINGS INTO MY EARS OKAY BARGAIN WE WONT' DO THAT BUT WE'LL GO SHOPLIFT SOME MIKE AND IKE'S FROM THE CORNER STORE OKAY OKAY---

DON'T HOLLER IN THE STREET AT EAST CAROLINA. It's enough to get you four total misdemeanor points, and one bonus for getting arrested for something that boils down to "so drunk we thought randomly yelling in the street was a good idea."  Five points for ECU.

AMES, IOWA'S ELEVATION REPORTEDLY CHANGED TEMPORARILY AT A SINGLE POINT CALLED DURAN HOLLIS.  The redshirt freshman running back was caught with a controlled substance. If it's a misdemeanor, and it's a controlled substance, we assume it's weed, and that is is the small, recreational amount associated with personal use. As always, we add on to any ideological beliefs about marijuana possession by noting that it's Ames, Iowa, and y'all get just as high as you want. One point for the Iowa State Hawkeyes in the Fulmer Cup