You cannot get on this man's level. Do not try. Have you lived in a picturesque Greek watermill with a Romanian noble woman? Have you walked the length of the European continent only to decide that the perfect way to end your journey would be a relaxing role in suppressing an uprising? Did you translate an entire Wodehouse novel into classical Greek on a dare? Did you drink Christopher Hitchens under the table when you were well past seventy? Did you write your lyrical and very successful travelogues in longhand until you were 91, when on a lark you decided to learn to use a typewriter? And did you do all your numerous rewrites in longhand? (If so, you are a masochist. This is fact.)

Patrick Leigh Fermor was a travel writer, a romancer of aforementioned Romanian nobleladies, accomplished Classical scholar, and a soldier who blew up both bridges and, if the moment called for it, the minds of his captured foes.

We were all three lying smoking in silence, when the general, half to himself, slowly said: Vides et ulta stet nive candidum Soracte. ["See how Mount Soracte stands out white with deep snow."] It was the opening of one of the few Horace odes I knew by heart. I went on reciting where he had broken off. … The general's blue eyes swiveled away from the mountain top to mine and when I'd finished, after a long silence, he said: "Ach so, Herr Major!" It was very strange. "Ja, Herr General." As though for a moment the war had ceased to exist. We had both drunk at the same fountains long before, and things were different between us for the rest of our time together.

Slaying the opposition with mind-bullets of pure classical Greek LATIN DAMMIT after you've abducted the man from behind enemy lines? Hitch is right: men like this are not made anymore. We salute you, Patrick Leigh Fermor, the man so badass James Bond dropped his name to look cool. Ouzos up, please, and a round of Stin ijiasas to you, sir.

TO THE FATHER'S DAY VIKING, in which Holly will honor her veryown Daddy Beeeill and suggest bitchin' Father's Day gifts for you slackabouts, and Orson will lounge about demanding presents because he's managed to keep a child alive for like a year and a half now.

Holly: Your dad may be a cocktail dad, but the only reason we even know those dads exist is that we lived down the street from Fearless Leader for a year. Our progenitor is a beer man, and we would never go so far as to adulterate his pint glass with anything not beer-like in substance, but here is this very fancy Lemon Shandy recipe we think we might be able to feed to our momma at Father's Day barbecue time. (For Beeeill, we will settle on sneaking some Sanpellegrino Limonata into this Miller Lite, just to see if he gets mad.) (He will.)

Orson: This is Father's Day, and if it is this is me just indulgently demanding things, I want the champagne that shares its name with the song of our people: THE ACE OF SPADES, BITCH. 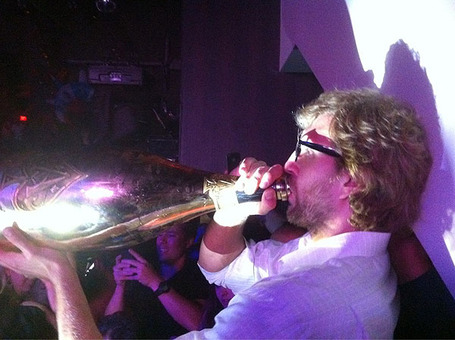 That's not for anyone else: it's for us, and we'll go the full Hagman by opening this at eight in the morning, taking some restorative Vitamin C, and then spending the rest of the day riding the effervescent champagne waves. Oh, but Armand isn't actually that good! Like you'll be able to tell after drinking a gallon of the shit while driving your dune buggy across town shooting paintballs at people who litter. Double fun: when someone says, "Oh, that's a huge bottle!" look at them quizzically and say "Or are we just tiny people, man?" [SPACE NOISE]

COMESTIBLE
Holly: GIFT IDEA ALERT! After espousing the virtues of the Big Green Egg in a summer 2010 Digital Viking, we fell into discussion with some commenters on its regrettably small grilling surface area. To combat this nuisance, we purchased this set of handy grill pans for Father's Day last, which meant that we got to spend Father's Day being cooked for ourselves, because OUR DAD IS THE BEST DAD and we are diabolical at present-giving. You can probably find cheaper ones somewhere. Whatever. Williams-Sonoma is our jam.
Orson: Again, this is strictly personal gluttony in the name of Father's Day, but if demands must become reality, let it be in the form of some kind of soft-shell crab delivered to me in truly embarrassing amounts by Thai women who look at me disapprovingly, slap me, and then giggle and run away to fetch me more crab. 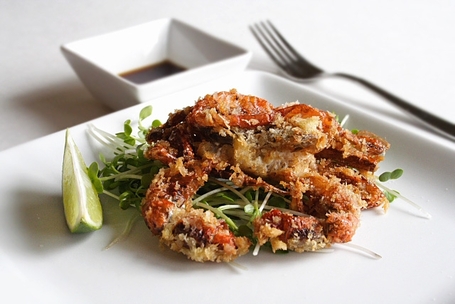 Why soft-shell crab? Because it is the meat you can eat stem to stern without thought, as close as you'll get to lying on your back in a bay and demolishing a crab like some great drunken otter. (This is invalid if you have in fact done this, lying on your back in a kelp bed while smashing open oysters with a pair of rocks you have arranged on your belly in the manner of an industrious otter.) You must also serve it with an embarrassing amount of rice to soak up said sauce in, and then tow us away in a litter for a recuperative opium nap immediately afterward.
COMBUSTIBLE
Orson: Oh, you magical dumbasses.

In reality he makes it out unscathed, but for my Father's Day the car would make loud NOM NOM NOM BARBECUE noises and devour him.

Holly: Is your dear old dad an airbrushed county-fair type? Ours still has this one, which features a grizzly bear being towed behind a boat and reads, "SKI DADDY." For the record, we are WAY too young in this picture to be deserving of that look he's throwing our way. We did not raid the liquor cabinet until at least age two.

GIFT IDEA ALERT! This summer, we're updating Beeeill's look by having a deer explode out of his chest. 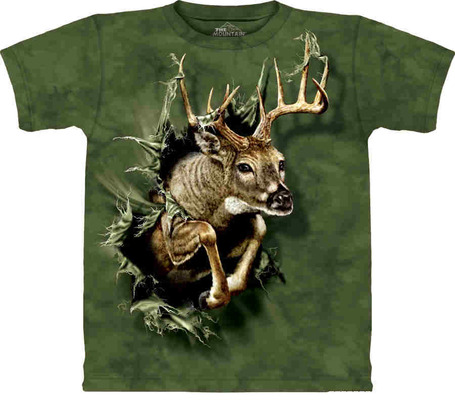 [A word: AnimalShirts.Net is the greatest website not named EDSBS in recorded human history. Another word: If you think we're not wearing this to LSU-Oregon, you don't know us at all.]

Orson: I am a man of simple pleasures. For Father's Day, all i want is a dune buggy full of supportive, encouraging topless women of all races with master's degrees and boffo 70s hairstyles to escort me on a drunken dune buggy ride across the city as I paintball litterers, bask in the glow of haters, and make our way down to Trader Vic's for a nutritious dinner of alcohol steaks.* This wouldn't be about sex, though, or objectification. It would be about freedom and dune buggying. Someday the world will understand this. 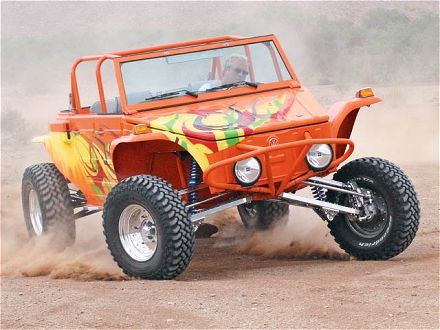 Later we will all sit in a hot tub, eat rich chocolates, and listen in deep appreciation to Steely Dan's Aja on a hi-fi soundsystem beneath the stars. "Oh, the syncopation on "Peg?" I'm glad you noticed that, Katja. It's one of Chuck Rainey's greatest accomplishments as a musician." The evening concludes when I ride the dune buggy off a cliff, crash violently, and then dust myself off without injury and retire naked to my bed made with sheets hewn from hundred dollar bills. As I said, I like to think of myself as a sports everyman. Just one of the guys.
Holly: GIFT IDEA FOR THE EMBARRASSINGLY RICH AND INSANE ALERT! We regret to inform ourselves that it's bullshit PR copy and that this nightclub is not, in fact, part spaceship. BOOOOOOOO.
CANON
Holly: GIFT IDEA FOR THE RECALCITRANT FATHER ALERT! This year he wants an iPod (isn't it awesome when your parents discover the Apple Store, millenials?), but our dad is one of those guys who has everything, and who is actively hostile towards just about everything else. This is perhaps our favorite quality of his, so we've taken to scheduling jaunts for birthdays and Father's Day, and this year we lucked right the eff out with Steve Martin and the Steep Canyon Rangers coming through town a couple weeks back. Arguing bluegrass with the crowd in this comment thread would, we sense, be a lot like arguing barbecue, and we could not mean that with more love, but just check out a tour date before you snit about how ZOMG SO INORGANIC. Best of all is the tour tagline: "Where beautiful Asian ladies won't be waiting for you." Sorry, Daddy, but you did get to hear "King Tut" played on a banjo. 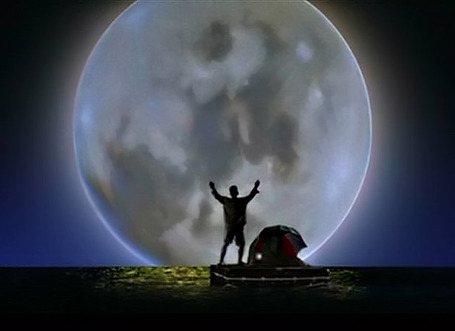 Orson: I HAVE A BRAIN CLOUD. For Father's Day I'm watching Joe Versus The Volcano and there's nothing you can do to stop me from savoring its long, awkward pauses, its nonsensical plot, or Abe Vigoda as the chief of a tribe of people who use orange soda as currency. It also contains my favorite quittin' time scene ever. This movie is not good in the least, and I love it dearly for reasons I do not understand. After drinking an entire giant howitzer shell of champagne, I will cry at least seven times its runtime, and only thrice will it be appropriate or even comprehensible.

Happy Father's Day to you and yours, from all of us at EDSBS.