It is September, 2010 in Ann Arbor. A shadowy TATE FORCIER sits unnoticed on the sidelines on a pine bench, watching a disgruntled stream of Connecticut Huskies trudge past.

FORCIER. (Softly, rueful) I can't bear it. They're so young and beautiful. Why did they ever have to get old? (Stands, crossing to RICH RODRIGUEZ, who turns away to speak to an assistant) Coach, I'm here! I'm grown up! I love you all, everything! (Leans over bench as if wanting to embrace RODRIGUEZ, but he turns away, slipping out of FORCIER's arms as though he cannot see him. FORCIER is left holding a piece of shiny fabric. He holds it up for the audience to see. It is a Miami Hurricanes jersey)

FORCIER. (Terribly hurt at his coach's lack of emotion, looks down at the jersey between his empty arms, then back at RODRIGUEZ. Finally he forces himself to speak a banality) Oh, Coach, you shouldn't have. (Fade out.)

FORCIER. (Proudly) Why do we all wait until we are at our lowest point to seek God’s help? I’ve been kicked, pushed, knocked down, publicly berated, belittled, emasculated and more. There are plenty of legitimate reasons to give up or feel the victim. The humility of it all is indescribable and that is exactly my point.

FORCIER. (to GOLDEN) I really want to be a part of the rebirth at Miami. There is so much positive energy around this program. (Passionately) Oh, Coach, just look at me one minute as though you really saw me! (GOLDEN begins squat thrusts, placid and smiling, not hearing.) Coach, just for a moment let's be happy -- (In greatest desperation) Let's look at one another! (GOLDEN begins flexing at the unseen mirror, making horrific faces. FORCIER backs away, agonized.)

(A vine-covered swing lowers onto the stage, strewn with the accoutrements of the islands. FORCIER dons grass skirt and coconut bra over his uniform, and sits, beginning to sway. A cool, humid breeze seems to stir the stage curtains. It is June, 2011.) 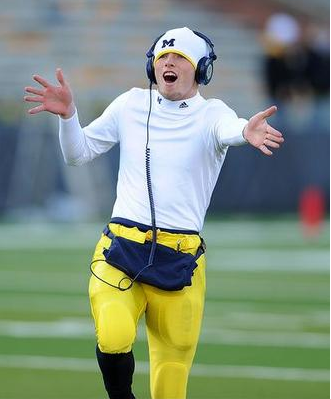 FORCIER. I do hope all my young fans forgive me and benefit from my lessons that I have learned. Be grateful for what you have and be humble for your successes. (RODRIGUEZ enters, upstage right, in an ill-fitting CBS blazer. FORCIER seems to sense him. A beat. FORCIER swallows, glances upstage at RODRIGUEZ.) With that being said, its time for me to go. I promise the Michigan family and fans I will make you proud again. (To RODRIGUEZ) Take me back. Across the ocean, to San Diego. But first: Wait! One last look. (Crosses right) Goodbye! Goodbye to Hoke and Golden and, for some reason, Bill Snyder. Goodbye to gameclocks ticking and new-ironed jerseys and the whirlpool tub. (He flings his arms wide in an ecstasy of realization) Oh, football, you're too wonderful for anyone to realize you! (Thinking a moment, he half-turns to RODRIGUEZ) Do any players ever realize the game while they live it -- every, every minute?

RODRIGUEZ. (Quietly) No. (A pause) The Sun Belt players maybe -- they do some.

ROBINSON. Were you happy?

(FORCIER pulls a plastic spork from his pocket whose points have been whittled to razor sharpness and lunges at ROBINSON's knees with an unearthly howl. Fade out.)