A HISTORICAL OVERVIEW OF THE IMPORTANCE OF PANTS IN COACHING

Share All sharing options for: A HISTORICAL OVERVIEW OF THE IMPORTANCE OF PANTS IN COACHING

Please, never, ever ignore the strategic importance of coaches and pants. Mike Sherman, struggling without the NFL's warm embrace, only found work with Texas A&M after he found a pair of khakis that conformed to his unique and zaftig figure. Bear Bryant owned the same three pairs of pants for years, and made them last through stern coaching and the positive influence of his upright moral character. ("Khakis, I know you're threadbare, but you'll do it for Alabama, won't you? Khakis: "Yessir. Yuss ah will.") Dabo Swinney's neatly creased khakis were the sole factor in his hiring as interim and then permanent head coach of the Clemson Tigers. If you think this is not true, you clearly do not understand Clemson football or its traditions.

Pants are also important because without them coaches would have to wear shorts, and no one trusts an authority figure in shorts, not even gullible little children or senior citizens. The only exception to this is Ministry of Health Secretary Beyonce Knowles, and the reasons for this exception should be obvious. (Her thighs need to breathe, or their power will accumulate and create a criticality accident of immense magnitude.)

Worse still they could be called to go pantsless, an arrangement only Bobby Bowden managed to make work during his first few seasons in West Virginia. 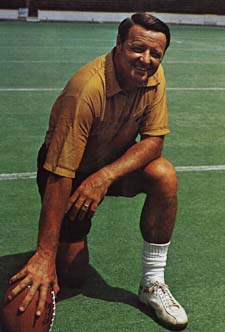 Coached without pants for a dadgum year. Called me Bum-blerooski. I didn't think it was funny. Florida State offered me a five dollar raise and an exclusive deal with Haggar. Couldn't turn it down.

And let us now praise great moments in the intricately linked history of football coaches and the humble pant. 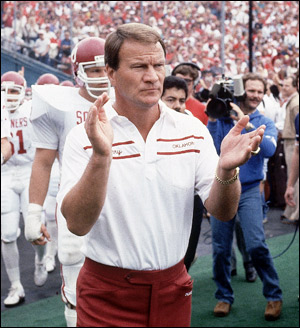 Some pants are made to be worn, secure and snug and immovable as the bunker walls surrounding a mortar installation. Barry Switzer's pants are not these pants. Sooner Red and seemingly spring-loaded at the waistband, the pants of 1970s and 1980s Barry Switzer were designed by safety engineers to appear as if they were about to explode off his sinewy, beef jerky-scented torso at any given moment.

There was reason for this: Barry Switzer's pants were in fact fitted with tiny sequenced explosives that would detonate with the tug of a beltloop, leaving Barry ready to impress in luxurious hotels and alumni meetings across the great flat heartland he ruled as king. He is seen here shortly after testing his entire detachable suit he wore while coach of the Dallas Cowboys. 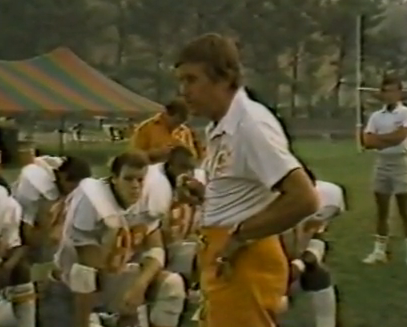 Johnny Majors was born with two navels, or so he thought. He fought his entire life to cover them: first with silly putty, then with roofing tar, and finally with Bondo. It wasn't enough, though. Majors covered his shame by hiking his pants higher, and higher, and still higher, refusing to allow the world to see his secret shame. He took to wearing fishing waders in the shower, and when asked about it would joke the query away by saying "You never know when a big bass will sneak up on you!" Then one day Johnny Majors swatted at the extra navel, and it fell off, and Johnny Majors realized it was not a navel, but an ancient Chiquita banana sticker that had stuck to him for 46 years. And that's why you always wash your belly, kids, because you might not have two navels and thus be born of the devil. You might just have terrible shower discipline instead, and that's something we can all overcome together.

---A tale of the necessity of public hygiene from the Tennessee Department of Public Health and Tennessee Head Football Coach Derek Dooley.

Steve Spurrier's pants were unique in that an entire set of golf clubs were sewn into the lining. He always carried his own balls, however, heavy as they were. 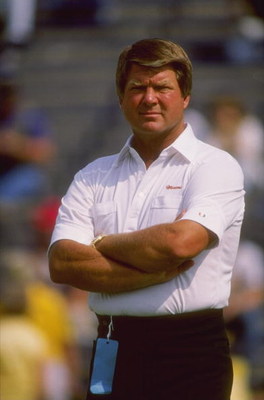 Jimmy Johnson's pants hold some kind of record for tensile strength, especially when pranksters yanked the tag to inflate Coach Johnson at inopportune moments in games. He is seen here seconds after the inflation process began, going off much as a car airbag would in an accident. Johnson once tried to break wind in those pants, and the impact of the button into a cheerleader shattered her orbital bone and scarred her for life. 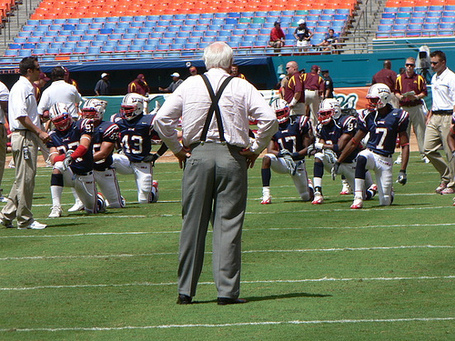 DAT ASS. Schnellenberger sews his own pants to the day from the drapes of recently condemned grand hotels, and don't you dare mock a man for sewing. There's nothing feminine about making a finely cut pair of slacks, especially if you weave them from the leftover body panels of the Hindenburg. Like Bryant, Schnellenberger has a limited set of pants he has exhorted into five, sometimes six decades of service. There's history in some of them, and we mean that quite literally because the gun that killed Lee Harvey Oswald is in the gray pair and have the dry-cleaning receipts to prove it. ("Dear Boca Raton Precision Cleaners: Please leave gun in pocket. Do not tumble dry, as gun may go off at any moment. It belonged to my close personal friend Jack Ruby. Thank you for your consideration and care, Howard.") 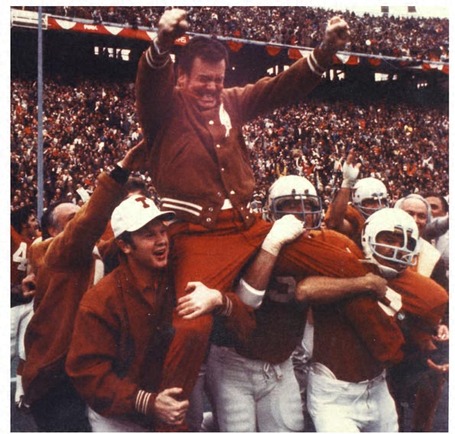 Darrell Royal's burnt orange victory pants were spectacular enough for fit and color, but their real moment of heroism came in withstanding a very poorly timed but classic and emotional "Darrell Royal 'Wrong-horn' Longhorn Battle Fart" at the conclusion of the 1969 Cotton Bowl against Notre Dame. The three gentlemen carrying Royal suffered radiation burns on their shoulders and lung damage from the fumes, but glory's invoices contain many zeroes and are not easily paid. 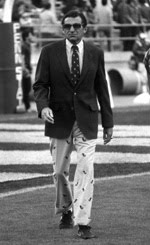 Joe Paterno only wore these pants in a game once because he could not find a pair of clean ones, and had to wear the pair his wife suggested he buy at the Jersey shore on a dare. That's infinitely better than anything any of us could make up. 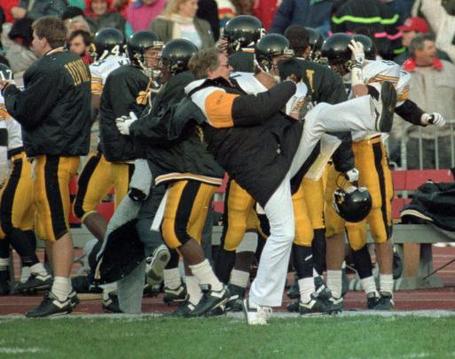 Hayden Fry's pants are the greatest in the history of college football for so many reasons. They required daring, lest you spill coffee on them or go astray with a few drops of pee at a urinal. They required coordination, since Fry's underwear of choice (Tangas, naturally) required getting your underwear game straight ahead of time. They required strict diet and regular gymnasium visits, since a white pair of pants is among the least forgiving in terms of asscloaking. (The only color of pants that will make men look like they have cellulite.)  Most of all, white pants required sheer attitude to pull off, but Hayden Fry doubled down by growing a mustache and nailing celebratory high kicks effortlessly.

He says he wore them so his quarterbacks could find him on the sidelines, but a generation of thick-boned but appreciative Iowa housewives know the truth and so does Hayden Fry.