Narrator: Hello, and welcome to Histories Mysteries. Today, we look at how one small town destroyed a Nazi plot in America, but now that same town denies that the events ever happened. Why would these true patriots cover up their actions? We’ll explore that question and more when we return to Histories Mysteries.

Narrator: Few issues have permeated every aspect of American history the way that race has. Likely the most representative symbol of America’s troubled history of racial tension is that of the Ku Klux Klan.

Narrator: The Klan originated in the south after the end of the Civil War. While the Klan’s popularity and prevalence would eventually fade, it experienced a revival in the early 20th century as America’s racial tension flared up once again. The Northern state of Indiana became a hotbed of Klan activity. 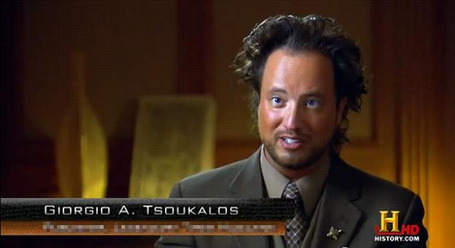 Giorgio A. Tsoukalos: Now, Indiana is this hotbed of white supremacy after World War One, and this fact does not go unnoticed by Hitler and the Nazis during the early years of World War II. In fact, similar to the Zimmerman Telegram of World War One, Hitler tried to instigate a revolt from within the United States, so as to prevent the U.S. from joining the European theatre. So Hitler sends some Nazi spies into America to foment a revolt in Indiana.

Narrator: No one knows how the spies entered America and got all the way to Indiana.

Giorgio A. Tsoukalos: So the Nazis somehow enter Indiana and they go to West Lafayette. At this point in history, West Lafayette is basically cow pastures. It is hardly the ideal or logical place to start a revolt, but it’s proximity to Chicago and the rest of the Rust Belt makes it an attractive target for Hitler. When these Nazi spies arrive, there is an engineering school called "Purdue University" and a local factory that makes ranch dressing. That's it. Not surprisingly, the locals quickly befriend the Nazis and all seems to be going well.

Narrator: That is, until one particular incident. On the night of April 21, 1940, the West Lafayette locals cooked some bratwurst to welcome their new German friends. However, trouble arose when Horace F. Otis poured ranch dressing on all the bratwursts. According to legend, one of the German spies stood up, threw the entire plate of bratwursts on the ground, and stormed out.

Giorgio A. Tsoukalos: Now, you have to realize that all West Lafayette has is this ranch factory. Everyone worked there. Their grandparents had worked there. Their great-grandparents had worked there, and their children were going to work there. They all ate the ranch on everything. This ranch factory for all real purposes was West Lafayette, and that is why the German spy’s actions were so disrespectful. To knock that plate of ranch covered bratwurst on the ground was to knock those people’s livelihoods down as well.

Narrator: The people of West Lafayette soon turned on the Nazis.

Giorgio A. Tsoukalos: As legend has it, the local engineering college of Purdue had been contracted by the federal government to create a type of artillery gun to shoot a jelly like substance. The substance it was designed to shoot would actually turn out to be napalm, but the labs in California were only in the early stages of developing it. Now, needing a weapon to combat the Nazis, the people loaded the prototype cannon with ranch from their factory, as it was the only substance with a similar texture and form. So they load this thing up with ranch and fired it at the spies as they tried to make a run for the countryside.

Narrator: The cannon worked, and the Nazi spies were killed. Despite their success, some in West Lafayette became afraid that outsiders would learn of their one-time allegiance with the Nazis. As America moved ever closer to war, this fear became paranoia, and likely explains why the patriotic actions of the West Lafayette townsfolk are so secret even today.

Giorgio A. Tsoukalos: What the people of West Lafayette did is completely destroy everything. The ranch factory, the Purdue engineering college, I’m talking everything. They burn everything and swore to never tell a soul. In fact, no record of any of this exists today. If you go West Lafayette today, there is no Purdue University, and the locals deny it ever existed. They still eat ranch, but they don’t make it there anymore. Even the records of the supposed government contract with the school were destroyed.

Narrator: As the harmful effects of napalm were revealed, the government destroyed all knowledge of their involvement in the weapon's development. However, one piece of the puzzle remains linking all these events together.

Giorgio A. Tsoukalos: Now it seems that the residents of West Lafayette were successful at covering up their past, with the exception of one tiny, but crucial, piece of evidence. This comic appeared in the Purdue engineering college’s student newspaper. It clearly mocks Hitler and the Nazi’s attempts by showing a German tank’s inability to move through a field of ranch. 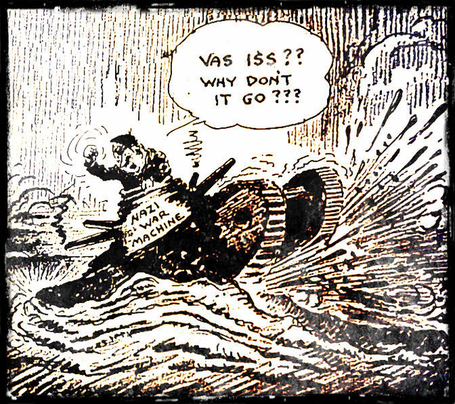 Giorgio A. Tsoukalos: I think this image undoubtedly links these events together, and there is no doubt in my mind that Nazi spies did try to start a revolution in Indiana, that the local townspeople used a ranch cannon to stop them, and, most importantly, that a Purdue University did once exist within West Lafayette.

Narrator: We hoped you enjoyed this episode of Histories Mysteries. Tune in next week when we look at how Hitler’s body was mummified, and where it is believed to be stored today......