Share All sharing options for: DANA HOLGORSEN STARS IN CRANK 7

Dana Holgorsen spent the first week on the job as West Virginia head coach visiting with the pillars of the program, healing wounds inflicted during the tumultuous Stewart/Holgorsen consul period, and proving himself HAHAHAH WE'RE KIDDING HE GRIPPED AND RIPPED IT BY GOING WHITE WATER RAFTING AND SKYDIVING. 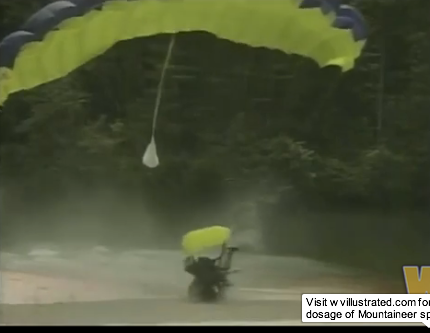 From WVIllustrated, a quote confirming that everything Holgorsen says begins like he's just waking up, and ends with a flash to a 90s action sequence set to a Prodigy song.

Prior to the jump, Holgorsen was asked what he did to prepare for his leap. His response? "Nothing," he said. "Signed a waiver."

He would have focused more on the ground, but he had to concentrate on fighting the Beijing Cocktail in his veins all while calling his old girlfriend midd-fall in a fit of wistful regret.* The audio's nonexistent on the landing, but if you enhance the video you can read Holgorsen's lips as he says "I call that landing 'The Bill Stewart offense.'" The NCAA is going to investigate this for exceeding the limits of known coaching penile magnitude, and the conclusions will be clear and decisive. GUILTY ON ALL COUNTS. This chain of Holgorsen jokes could go on forever, but all we need for the moment is 2011 and the prospect of Dana Holgorsen being shot into Milan Puskar Stadium in a Zorb filled with brown liquor and Red Bull for the LSU game. (Or surfing in on a flaming couch wearing bloody bear hide. We'll take either one.)