TERRELLE PRYOR TO TAKE HIS TALENTS TO OHIO STATE

Share All sharing options for: TERRELLE PRYOR TO TAKE HIS TALENTS TO OHIO STATE 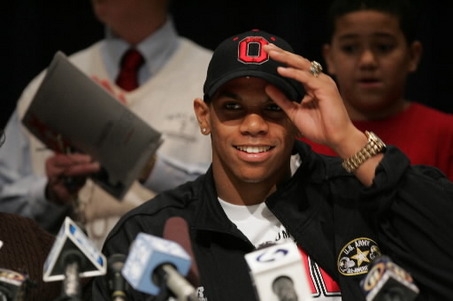 "I know y'all been waiting, but I've decided," the former Ohio State quarterback said pulling an Ohio State cap  from underneath a table and placing it on his head. "I'm going to sign with THE Ohio State University and bring back the Big Ten title to C-bus, y'all."

Pryor appeared relieved as agent Rosenhaus described the lucrative terms of Pryor's contract with reporters. Pryor will sign a one-year deal with the Buckeyes with a guaranteed salary of just $23,000 in total cash value. The real value in the contract will come from a series of incentives and marketing deals valued at anywhere from $0-$40,000.

One anonymous Columbus business expert explained the deal to EDSBS.

"See, he'll sign stuff, and then people will buy it online. It's an open market. Some people will pay up to $500 for something with his signature, you know? Some people need to be shot in the fucking head so I can take their money and do something less stupid with it like eating it whole or burning or some shit besides giving it to Terrelle Pryor."

In addition to the memorabilia sideline, Pryor will receive a number of other extra benefits, including but not limited to free tattoos, his choice of loaner cars from a local car dealership, free rounds of golf, and free food and beverage at select local establishments. Experts tag the entire package as somewhere around a total benefit of $100,000.

When asked if Pryor's contract with Ohio State was finalized, or even really possible under the rules of NCAA amateurism, Rosenhaus smiled as he addressed the media.