PEOPLE HOUSTON NUTT WOULD GIVE HONORARY SCHOLARSHIPS TO

Share All sharing options for: PEOPLE HOUSTON NUTT WOULD GIVE HONORARY SCHOLARSHIPS TO

This brilliant bit from the strange past of Patrick Fain Dye naturally led us to thinking about who Houston Nutt would hand out an honorary scholarship to, and don't make the joke about all scholarships being "honorary" to Houston Nutt, because Mike Slive effectively already did. With Luke, who's now on board for various duties at SBN including Nutt Satire Duty. 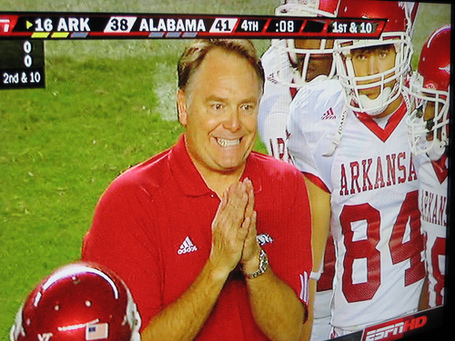 Jeremiah Masoli. Welcome back whenever he wants to finish his masters degree.

Taylor Hicks. Would give him two honorary scholarships if he could.

The KFC Colonel, Popeye, The Cajun Colonel, and Reverend Colonel (of Church's.) All colonels. It's important to respect our troops.

Kelly Clarkson, but only at her most voluptuous

R. Kelly. He steps in the name of love. Don't snicker. He ain't perfect and neither are you. We all make recruiting mistakes.

Khloe Kardashian. You know what he likes about her? SHE'S BIG.

Harold Camping. 0-2 ain't such a bad start in the SEC

Mr. Smith. The only honest 12 term senator left in Washington.

LeBron James. Let's play your true sport before you get too old, son.

Calista Flockhart. He doesn't know what she's protesting, but you gotta admire her commitment to a hunger strike.

The sun. Big ol boy, ain't no quit in him either.