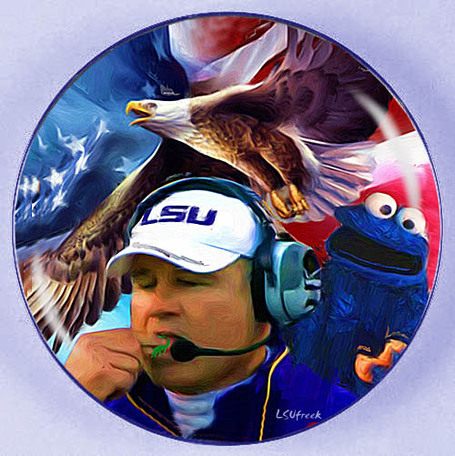 "I said that there has to be an alligator handler in every class. In fact Troy has got the swamp people. We’ve got to make sure that we keep a quality contingent of free-spirited men around."

SEC Flack: Coach Miles is here to take a limited number of questions.

Les Miles takes the podium. He places a bucket on the table.

Miles gestures at the bucket. A clumsily made sign reading "TAFFY BUKIT" is taped across its front. Kleinpeter reluctantly shuffles forward, drops a piece of taffy in the bucket, and silently prays for death. Miles BEAMS.

Kleinpeter: [sighs.] Coach, I was wondering what you meant in your comments yesterday about "alligator wrestlers" and "men of spirit."

Miles: Oh, I dunno, Jim. It's just a word we like to use, in the words we use, when we use them and try to use words to make our player understand things with words. It's words.

Kleinpeter: It it a technical term?

Miles: I like it, but respect the bucket, son. Next time you put those in there with your buttery little hands.

Reporter Two: What does the alligator handler do? Does he actually wrestle alligators?

Miles: [laughs.] No, no, no. We wouldn't let our players wrestle alligators. [Pauses.] Yes, that's exactly what he does.

Reporter Two: Is this necessary?

Miles: Can you spell success without "alligator handler??"

Reporter Two: Yes. Yes you can.

Miles: If you say so. And you call yourself a journalist.

Kleinpeter: What are some of the other positions?

Miles eyes bucket fiercely. Reporter 3 rummages through pockets and deposits a piece of Laffy Taffy into the bucket.

Miles: Is it banana? Because you know that's like barely taffy, right?

Reporter Three: It is banana, coach.

Miles: It better be. The Knob-gobbler swallows doorknobs. Don't get any ideas.

Miles: He's also the team homosexual. Every team needs one.

Reporter Two: Any other special positions?

Miles: Crabappleback: monitors team intestinal function.Shinewarden? Schembechler never told me what he did, but it involved something with exchanging lottery tickets for expired stamps. Gotta have one nevertheless. Spitmartin! That's an especially important one.

Reporter Two: What does he do?

Miles: I wish I could tell you. He's like the team's electrician, if football players were made of wires, and not valor and jock itch. He also slaps people when they're sleeping just to let them know that life hurts, and they better get used to it. it was a Bo thing.

Kleinpeter: What were you in Schembechler's system?

Miles: Oh, now, I wouldn't want to tell you that. You have to keep some secrets, some football secrets, the secrets a football team uses to keep some things secret and come together as a team secretly.

Reporters mock-boo and cajole him into talking.

Miles: Okay, okay. I was the Muffin Man. 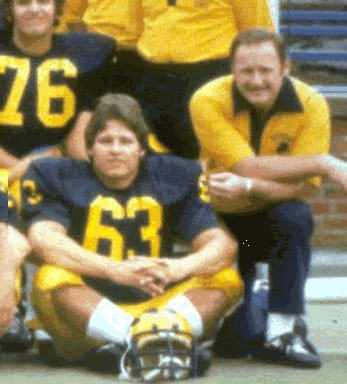 Reporter Three: Were you responsible for getting donuts for the coaches in the morning?

Miles: Sort of like that. Off the record, right?

Miles: I was supposed to...occupy the opposing coach's daughter or wife before games.

Kleinpeter: How did that---

Miles: Oklahoma! '75 Orange Bowl! Lemme tell you, Switzer's old lady was the toughest. Ol' blue eyes had no effect on her.  Finally, I get to hustling--dinner, drinks, a little shirtless pool boy act I used to do-- and make a few things happen. The Muffin Man is about to make his delivery WHEN-- in walks Barry himself.

Miles: Well, a gentleman doesn't tell his secrets, does he? We resolved the matter like three sensible adults.

Miles: ---but I'll just say this. They don't call that man the master of the Wish-Bone for nothing.

Miles: He made me a better man, a better lover, and a better coach. I'll never forget him for that.