AWWW, HE CALLED THEM BUDS. There's little to this piece of "these guys know each other," but every time someone mentions the Dark Mark buddyhood shared by former Saban assistants,  we just think of this. 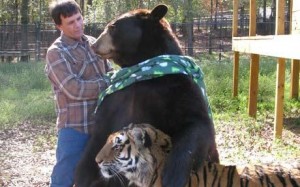 Held in captivity by an evil overlord? Check. Abnormal beasts with an even stranger bond? Check. Muschamp is the bear, Jimbo Fisher is the tiger, and Dooley is the lioness. (He's the one most in touch with his strong feminine side, and we mean this as a compliment since this means he is like his ass-kicking mother.) #SECBUDZ4EVA

Mark May just does this all day long, and will continue to do so by suggesting "Pete Carill" and "Jim Harbaw" as other possible candidates.

FURTHER NECESSARY TRESSELATION.  The Barking Carnival piece by a former Longhorn walk-on has a lot of good notes on how compliance actually works at a megaprogram (summed up nicely by "Texas compliance does not fuck around.) It also has the nice little details you hope you'd get from a former player.

We had our "open secrets" in Austin too, for instance: It was an "open secret" that Cory Redding drove the worst piece of shit on campus for his entire time in Austin. Seriously, if you got stuck riding with him to the morning conditioning session, you had to schedule a tetanus shot for that afternoon.

Our favorite baller car: Johnny Rutledge's hatchback, a heaving automotive deconstruction he drove like it was a spanking new Mercedes. (Like the one Fred Taylor had with Tank Black's money, for example, the one with the "Taylor Made" visor perched conspicuously in the back window.)

OKAY, NOW FURTHER TRESSELATION.  Mmm, the reverse troll by Scarbinsky gets an 8.3 from the judges. Off Tackle Empire runs the numbers, and they are thorough and thoroughly inconclusive. Ramzy's piece mentions all the nice things Tressel did as the guy who encouraged his players to serve in the community, a role we don't see as being incompatible with someone who was also a marginal liar at times. Craggs is fiyah as usual, and Jason Whitlock wrote some total bullshit which says many of the same things, but badly.

YOU COULDN'T USE ANOTHER GIF OF COURSE YOU COULD.

BILL C. IS A MACHINE THAT JUST MAKES PREVIEWS. Here's his Rutgers piece. We're just going to watch him go until steam starts coming out of his ears and he leaves blood on the keys of his laptop.

HMMM THIS SEEMS A BIT EXTREME. The Iron Bowl Suicide kit is simple, instructive, and certainly in the spirit of the Alabama/Auburn rivalry.

AWWW, WIDDLE SOUTH ALABAMA. You growin' up like a big boy!