The human mind is an intricately wrought bundle of neurons and mystery, but one of its known and most marvelous quantities is the ability to recognize patterns in a swirl of chaos. Unfortunately, this is also one of its most documented weaknesses. If you've seen this by now, it may confirm your worst stereotypes about the Auburn football program as a wellspring of college football's most egregious recruiting banditries.

We implore you to look further and see past the titillating picture your brain wants to see here, because in each incident there is an obvious explanation washing away the portrait of corruption you might otherwise see.

On May 2, 1956, the NCAA infractions council hit Auburn football with the most severe sanctions given to any school in short history of rules enforcement committee.  An Auburn assistant coach gave $500 each to two twins to entice them to go to Auburn.

What you don't know: Auburn coach believed both twins were considering joining the University of Alabama, an institution who at the time was under investigation for harboring Communists, and that he needed to show them the benefits of capitalism in order to aid the American cause. Later investigations cleared Alabama when it was revealed Senator Joseph McCarthy's dossier on them included nothing more than a note reading "WEARS RED" and the shattered remnants of a bottle of scotch.

1958: For the second time penalties resulted because Auburn "offered illicit financial aid for the benefit of [the athlete] and his family."

What you don't know: Merely victims of a quirk in Alabama state law that classified a harmless gift of a side of bacon as currency, and one we think was well ahead of its time.

The SEC investigated Auburn after a former Alabama player, Sidney Roche of Columbus, GA claimed that he and another player, Ken Emerson (who denied the allegations), were offered money, a new car and clothing to play for the Tigers during his recruitment prior to the 1967 season.  Roche was quoted as saying, "It was as if we signed it would be $1,000 then, we’d get $1,000 that summer apiece and that every year at school we’d get $1,000 during the season and another $1,000 at Christmas and that we’d have a new car(e) sic our sophomore year."  Interestingly, the article also reports, "At Auburn, the athletic director Jeff Beard, and an assistant coach, Gene Lorendo, denied the charge."

In this case Roche later clarified that this was a misunderstanding over an enjoyable but deeply confusing version of the board game Life played during a recruiting visit. Roche reports that he ended up with like eleven kids, and had to jam the little plastic pegs all over the place just to get around the board. (He made the mistake of becoming a journalist, and had to spend his retirement as a "philosopher." ) 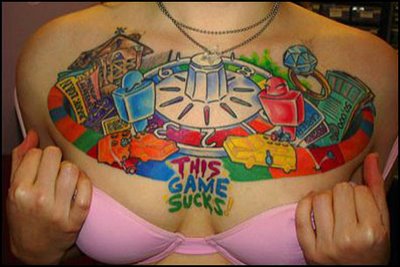 Another misunderstanding involving the game of LIfe.

In another instance, a football player was offered cash and his mother a washing machine, money and a round-trip air fare between her home and the university.

See, you know that one's fake because "a mother AND a washing machine" is redundant. And like they even had airplanes in 1974. Those weren't invented until 1986 and you know it.

On the day prior to this article, The Huntsville Times reported details from anonymous sources that the ACT would have been taken in Florida with the relative of one of Auburn’s assistant coaches.  In fact, Auburn assistant Bud Casey had a brother-in-law who was a director of ACT testing at a Florida high school.

Damning fact shooting down this entire claim: Florida does not have high schools, but instead awards diplomas at Club La Vela through rigorous dance contests. We know because we have one, and also have the devastating "Donkie Butt" dance injury to prove it.

Ramsey secretly taped his conversation(s) with Pat Dye, (see, Tapes support above) and after revealing possession of those tapes, Auburn administrators chose to ignore allegations of multiple students that Ramsey cheated in a class.

Former Auburn coach Terry Bowden said on tape two years ago that boosters were funneling thousands of dollars to players when he became coach in 1993, a time when the Tigers were on NCAA probation.

"They were paying players cash, $12,000, $15,000 to sign," Bowden said on a recording reviewed by the Associated Press. "All I was told to do was shake hands and say, "Thank you. I appreciate how much you love Auburn.’ "

Dwarves' long history of perfidy and alcoholism prevents any claim coming from Mr. Bowden to be admissible either legally (see case of Windsor v. Rumplestiltskin) or in the court of public opinion.

So before you make any grand conclusions about Auburn, just get your facts straight, okay?*

*P.S. Auburn also came in second in the charity drive. You may want to remember this after reading this.